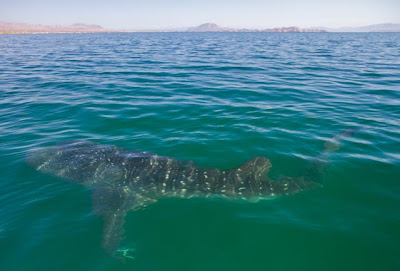 You could say we've been tracking the truck-sized fish-albeit badly. First we arrived in La Paz a day after they began their northern migration. Then we heard they were in Escondido, but also missed them there. When we arrived in BLA I thought we might be in for the same results. Everyone we asked said they had been practically tripping over the mammoth sharks right up until the day before we arrived.
Locating a school of fish, where each is the size of our boat, is trickier than you might think. But I asked a lot of questions and learned we needed to be on the lookout for a fin and tail on the surface. I also discovered that the whale sharks tend to cruise in schools through the shallow water in the south bay-from the village of BLA down toward La Mona, a distance of five miles. Narrowing my search down to a 5-mile swath seemed simple, after all, we'd already come 350 miles in our search for them.
This morning, before I even had my morning coffee, I was out on deck with the binoculars pressed to my eyes. Almost immediately I spotted a fin not far from the boat. I watched as it drifted lazily, thinking it was moving at the right speed, but seemed a bit small. Maybe it was a sea lion with a deformed flipper… Despite my doubt I rounded Evan and Maia up. We grabbed our snorkeling gear and piled into the dinghy. I directed Evan to where I had seen the fin--and saw nothing. We motored around for another 10 minutes then called it quits. Finding the world's biggest fish was going to be trickier than I hoped.
I spent the morning in a dejected state. Occasionally I checked the water but it wasn't until I recalled that in La Paz Mike and Hyo from Io had followed a tour boat out to the sharks that I had hope. This isn't a tourist Mecca but I scanned the south bay for pangas and actually found one sitting in a quiet cove. We loaded back into the dinghy and sped toward it.
Sharks! 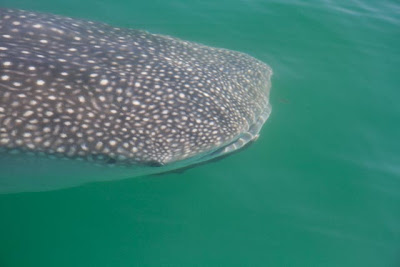 It was clear as soon as we arrived in the little cove we'd found the sharks. I saw the fins on the surface (exactly like the one I'd seen earlier in the morning, and far smaller than I would have expected.) Three or four of the huge filter feeders swam around us-first fins, then yellow spots and stripes suddenly appearing out of the murky green. Maia thought twice about jumping in after a particularly large shark cruised under the dinghy, dwarfing us, but she dove in soon after Evan did.
The whale sharks seemed unbothered by visitors and were potentially even curious about us. They'd circle around us, swimming closely enough for us to touch them (while I back paddled and emitted high-pitched squeals.) Their size and bulk wasn't intimidating though-they swam slowly and moved with gentle full body swishes. It was more the way they kept surprising us that made me squeak. After doing a circle or two the sharks would dive and disappear. But just when we gave up on seeing them again they'd reappear, swimming at us head on.
Having a huge shark (which despite its cheery polka dots, still looks like a shark) swim directly for you is, umm, invigorating. But the only real hazard is being hit by the massive tail. The sharks only reach a whopping 5 km/hour in speed but their big tail swings through a large powerful arc. We tried to keep our bodies between Maia and the shark-to keep her clear of the tail. But at one point a particularly intrusive shark separated us and Maia, in her need to be by my side, levitated over the shark's broad back to get to me.
The experience was a phenomenal one. We wished the water was clearer and that we brought our better camera-but that hour long swim is locked in our memories.
Check out the great pictures by Andy on the blog Savanah.
----------
radio email processed by SailMail
for information see: http://www.sailmail.com

Email ThisBlogThis!Share to TwitterShare to FacebookShare to Pinterest
Labels: Sea of Cortez, wildlife