Such Sadness for a Friend


There’s a funeral today. Every time I think about it my stomach lurches and I’m reminded of an unimaginable loss that happened in the blink of an eye. My friend’s sparkling little sprite of a daughter drowned near their boat. For an endless night, rescue crews searched the marina’s water while volunteers walked pathways hoping to find Kitty safe and happy. My friend and her family didn’t get their joyful ending.

Almost every parent I know has had ‘the moment’, that one where their kid was a kid and slipped from their grasp, or dodged out of sight. It’s ‘the moment’ because it reminds us that no matter how cautious we are, accidents happen. It’s also the moment because it should teach us humanity and compassion—it should remind us that sometimes when we get lucky, others do not.

I am so grateful to be part of a compassionate group of mothers who live on boats and who have jumped in to support Cidnie, Mark, Maura and Sam in any way they can. Some are making cross-country journeys for the funeral, others are coordinating meals, while others are fundraising for the family. Still others are there to bear witness with their words: My friend Cindy has compiled all the ways these women have said we’re standing beside the family in their grief and will be there in the future.

My friend Cidnie, with a level of grace I can’t imagine, has said one organization stood out in the search for Kitty. Tim Miller from Texas Equusearch promised the family to keep searching until Kitty was found. After other searches were called off, TXEQ kept their equipment in the water.

I was fortunate enough the write about Texas Equusearch a few years ago. If you’re not familiar with the organization, it’s one Tim Miller started after the loss of his own daughter. The volunteer group has purchased a variety of high-tech equipment to support local searches around North America. They also provide peer-support for families going through unimaginable grief.

Unfortunately, as a volunteer run organization they’re dependent on donations, and last year they nearly shut down, and Cidnie has asked that if you feel moved, to please donate in Kitty’s memory: Texas Equusearch
1 comment: 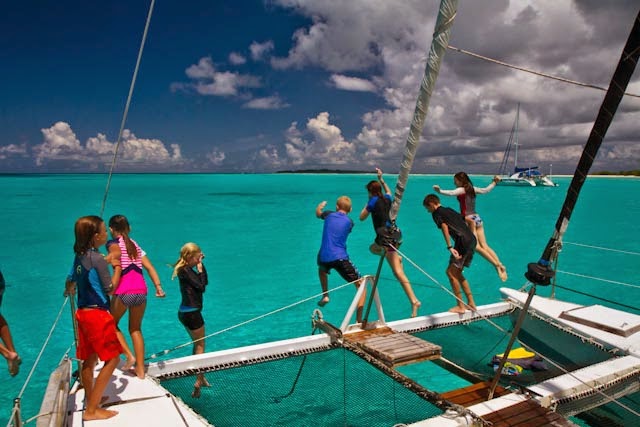 So we’ve been poking around the islands swimming in this gorgeous, utterly unreal, aqua water for a couple of weeks now. Some days we’ll sail for a few hours to another atoll. Others we’ll stay put and spend the day snorkeling and the evenings watching the sunset (often from the beach with a cold beverage in hand). On one level our experience is very similar to that of every other tourist who comes to the Maldives, but on another level it’s utterly different 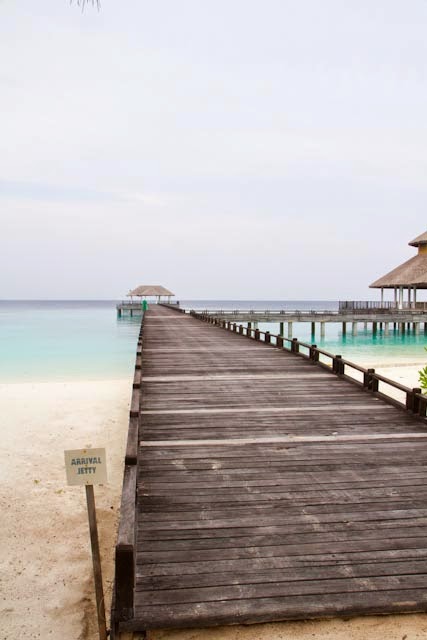 The Maldives is a fairly unique place. Unlike most tropical holiday destinations, people coming to the Maldives are typically headed to a luxury resort on a private island. This means you arrive at the airport in Male and immediately transfer to your hotel transport. A short while later you’re on your own island—no local hawkers to contend with and other than the occasional cultural day-trip to a local island, no rubbing shoulders with riff-raff.

We’re kind of keen on the riff-raff and are really grateful to be here after the 2009 Local Tourism Law which lets us visit the villages. But recently we (sort-of) got a view of how the other half live when we visited the Zitahli Dholhiyadhoo Resort. 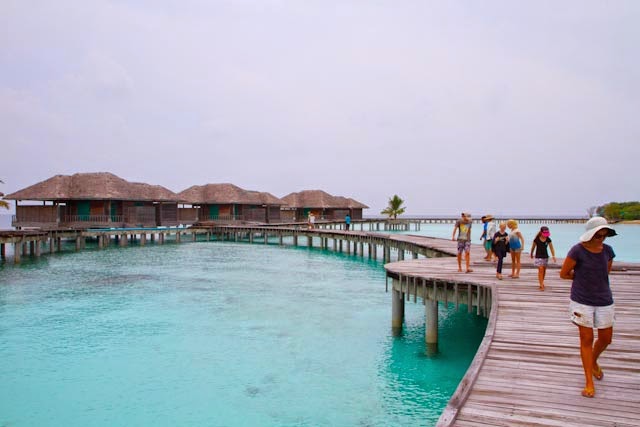 For a pleasant day we wandered the resort pathways, explored the amenities, played with the turtles in the conservation program and swam on the gorgeous resort reef. The major differentiation was we still ate and slept on the boat, and oh, the resort was built but never opened so it’s kind of abandoned.

Apparently there are quite a few abandoned resorts in the Maldives. Information about why they are tourist free is a bit scarce—but it seems that a combination of politics, financial and environmental factors have conspired against them. 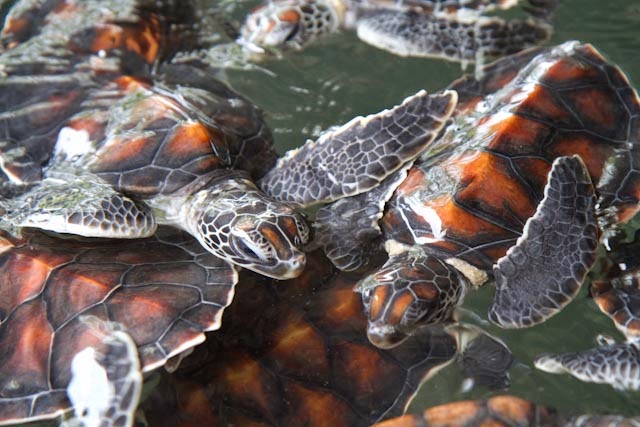 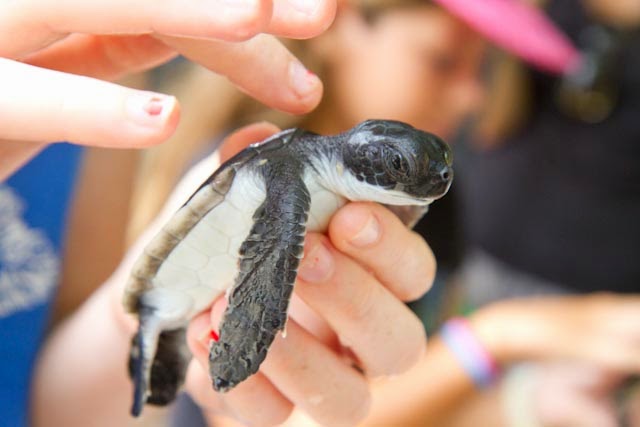 The result is both a bit eerie and heartbreaking. It seems like a huge waste and the workers who are left behind to try and maintain the resorts face an uphill battle. Zitahli Dholhiyadhoo was started in 2008 set to open in early 2011, but rather than looking like an almost new resort it’s looking fairly forlorn. Still gorgeous though. 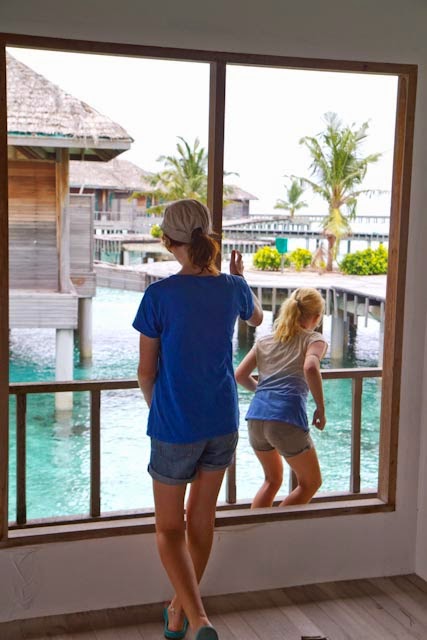 First Impressions of the Maldives 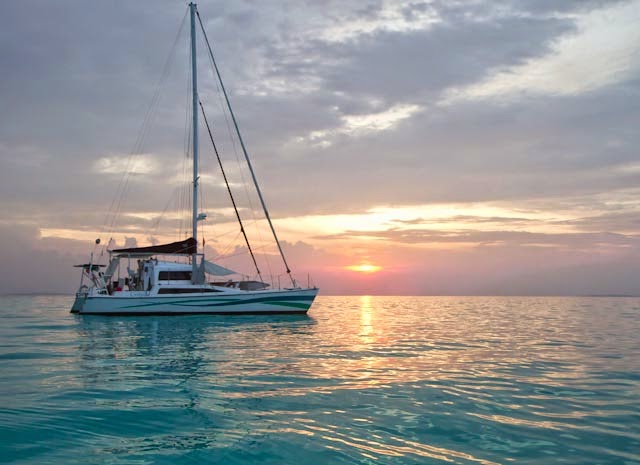 I’ve been slow to write about the Maldives—part of it is we’ve been busy exploring; the water is gorgeous and the villages are intriguing. The other reason is it’s a hard place to draw conclusions about; a typical day is a contradictory mix of experiences and emotions 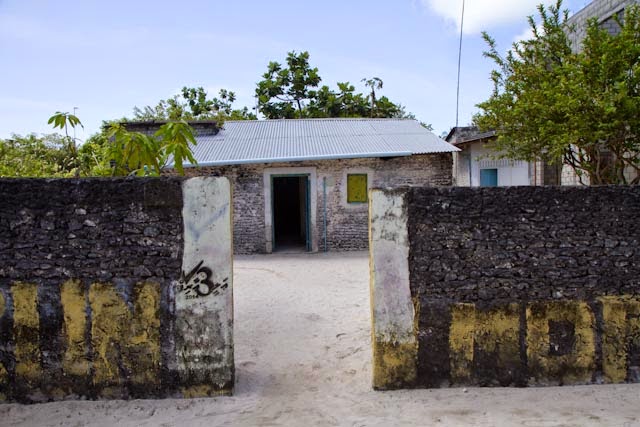 The other day Behan and I headed into Nolhivaranfaru, the little village we’d been anchored off of for the past few days. As we wandered the tidy grid of streets I was surprised by the grandeur of some of the houses peaking out from behind the high stone walls. Many of the homes we’re seen so far have been modest coral or cinder–block structures surrounded by fruit trees and enclosed by walls (often painted with political slogans). On Nolhivaranfaru there were also big blocks of government housing—apparently waiting to be filled by residents from other villages—as the Maldives seeks to centralize its population. 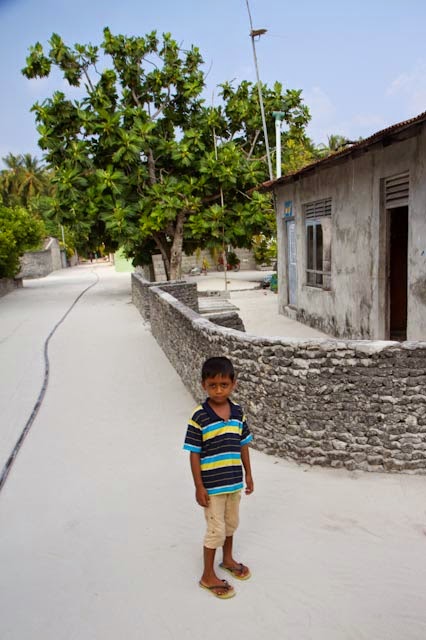 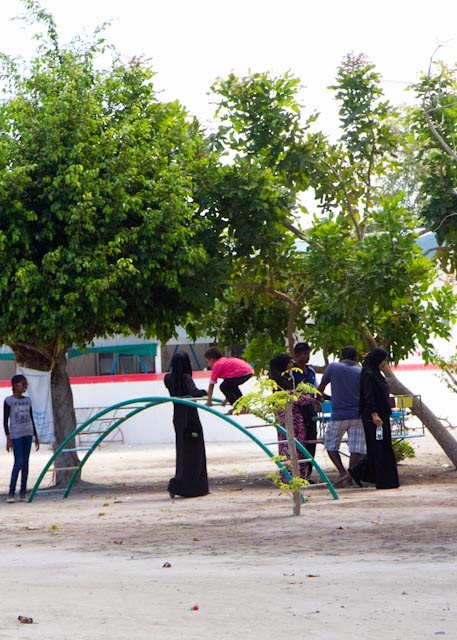 The main reason we headed in is we were planning to move on and Behan wanted to show me the ancient banyan tree in the village centre. I also wanted to take in some of the Koran recital competition that we’d been hearing amplified over the water. The reaction we got as we strolled the sand streets varied from engaged conversation, welcoming handshakes and smiles, to hard stares. We fell somewhere between guest and unwelcome distraction; despite having carefully dressed in long skirts and long sleeves our otherness still showed. 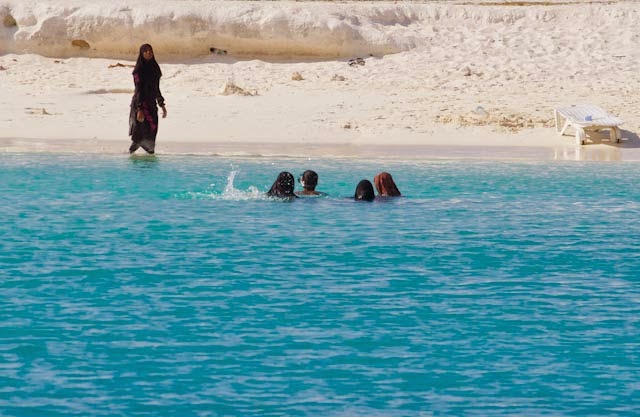 I’m not sure if this reaction is a reflection of the fact that the Local Tourism Law (which went into effect in 2009—and allows visitors to access islands outside of the approved ‘tourist’ islands) hasn’t really taken hold up here, or if Maldivian people are simply very reserved. Chances are we were among the first tourists (if not the first) to wander the village lanes. 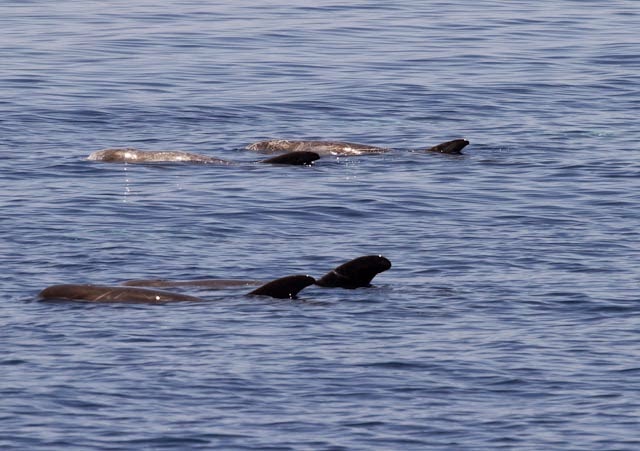 A short while later, we pulled up anchor and headed toward Kulhudhuffushi (grocery store island for short, and the forth largest city in the Maldives). On the way we encountered a small pod of shy dwarf sperm whale and a sleepy pod of Risso’s dolphins—just two of the 21 species of whales and dolphins found here. As we slowly motored past the Risso’s dolphins, we watched them drift lazily on the surface, their white snouts pointed sunward. One breached. And a few did dolphin leaps—but mainly they just sunbathed. 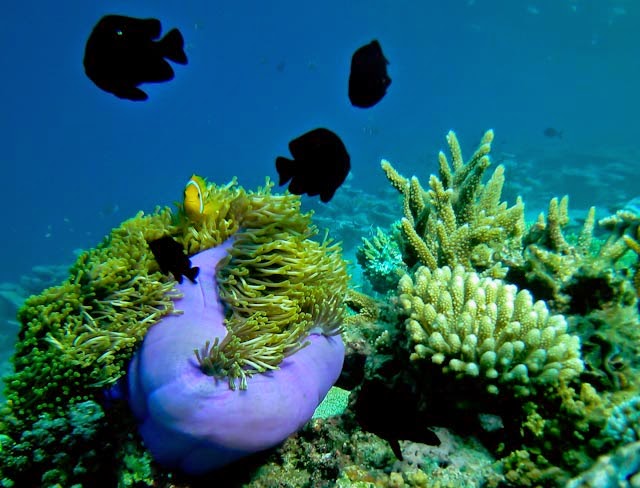 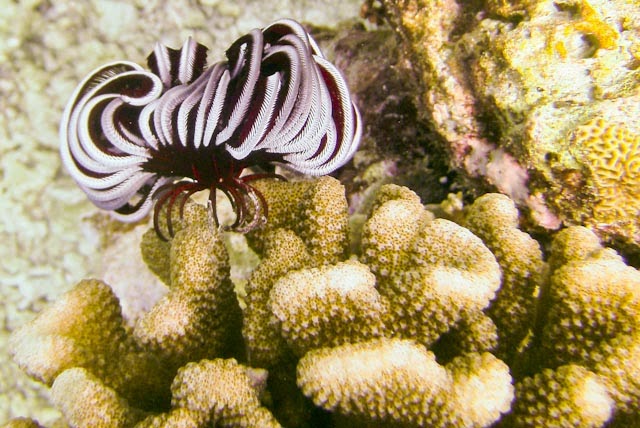 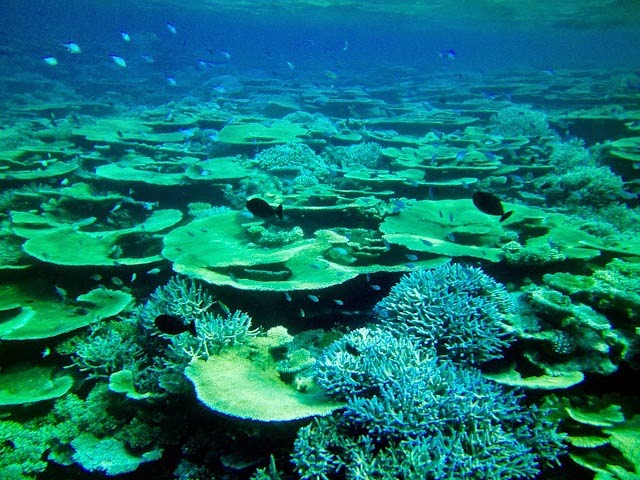 Below the water the life is just as rich and diverse. Sea-temperature rise means the coral isn’t as vibrant as some we’ve seen, but we’ve seen some great formations and a lovely variety of fish life. Coral is everywhere—so it’s not hard to find a place to snorkel (it’s actually harder to find a place to anchor).

Shopping
In Kulhudhuffushi we anchored in the international boat harbour—as the only boats, and waited for the customs officials to return from prayer so we could head ashore. When we headed into town I took in the faded yellow flags for the Maldivian Democratic Party that still flutter over the streets—despite the imprisonment of former President Mohamed Nasheed.

Lining the street were stores filled with a quirky miscellany; cinnamon next to a vice and a box of machetes, and areca nut (betel) found with the rice. What we couldn’t find was flour. Somehow in our provisioning, wheat flour was missed. We never carry tons; it’s easily infested and until now we’ve found it everywhere. 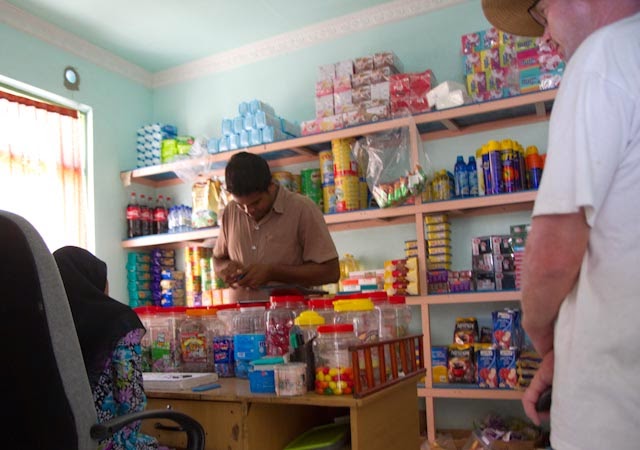 We searched along the wide sand streets and down a few narrow lanes. Visiting about a dozen stores we went through our spiel: ask for flour for bread, show a loaf of bread, and repeat the flour part. Usually we got a head shake. Occasionally the store clerk would look through the whole shop with us before sending us on to the next store. The worst moment came when we chased down the bakery truck only to have the driver look at us in confusion-despite the baked goods sitting beside him.

On a whim we went into on final store. As soon as we entered, we were ready to turn around, it had less on the shelves than most of the others, but when we went through our spiel the shop clerk opened up a bucket of flour.

Yesterday we arrived at a new anchorage. After a pretty snorkel the kids headed to shore and I made belated hot cross buns. Then Evan and I went in and joined the other cruisers sitting in a circle in the sand with the council president where they were talking about politics, drinking water shortages, sea level rise and fishing. A woman in a full hijab quietly brought us drinking coconuts—then returned to a circle of women a little ways away.

I peppered our host with questions—trying to get to the heart of the Maldives, trying to understand what it’s like to live in the place that the rest of the world sees as a perfect paradise.