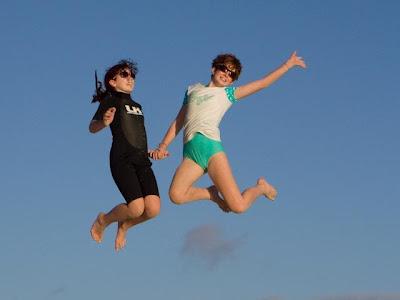 I’m not sure how most parents mark the passing of their kid’s years but for us, alongside the height marks on the wall, and the outgrown shoes, we’ve noticed Maia’s developing maturity by changes in our anchoring routine.
There was a time when she was very wee that when the moment came to anchor I’d strap her into her car seat and try to chant to myself, ‘it’s for the good of the boat’ while Maia protested very vocally and Evan tried to get my attention with hand signals before dropping the hook. Then came the stage where we would talk to her in advance, explaining she needed to play quietly and not interupt us with questions until the anchor was down and the engine was turned off. Sometimes if it was going to be complicated anchoring or docking we’d even pull out special toys.

“Is the engine off yet? No? Then please wait to talk to us.”

By the time she was seven she knew the drill and would tuck herself away with a book until the boat was silent and settled, and then we could look out at the new neighbourhood together. 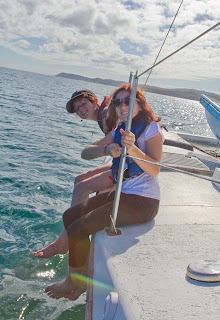 Then came the latest change, “I’d like to learn to anchor the boat.”

Our parenting style falls somewhere between ‘high expectations’ and ‘childhood is short and the magic should be protected’. What this means is when Maia brought home a recent report card we barely looked at it but asked if she’s having fun learning and is getting everything out of school she hoped. On the boat it means we expect her to help with every chore but if her imaginary mermaid friend wants to help too, we’ll get both of them a scrub brush. 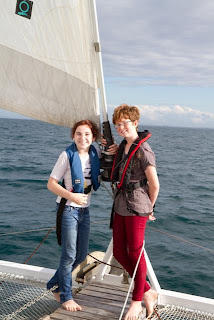 So through the years Maia has ‘helped’ but it was more about teaching her how to do things, and how to be part of a crew, than actually getting things done. Recently though this has changed. Along with bigger feet, and a height mark on the wall I no longer have to bend down to make, the way Maia helps us indicates she’s growing up. When we were hauled out to paint the bottom the quantity and quality of her contribution caught us both off guard. But it wasn’t until we went out sailing afterward that we really saw that our little girl had grown into a sailor.

And as she set the anchor and helped stow away gear, and made her friend feel at home and taught her how to use everything on the boat, we discovered we're sailing with a very different person than we arrived in Australia with. And I couldn’t help but feel proud and amazed.

“I’m not sure a boat will be my dream when I’m an adult,” Maia told me one evening as we watched the sun set beyond our anchorage, “but it’s a good way to grow up.” 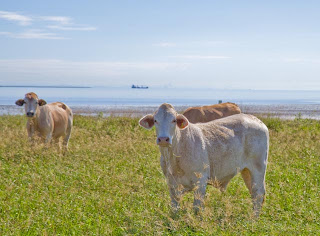 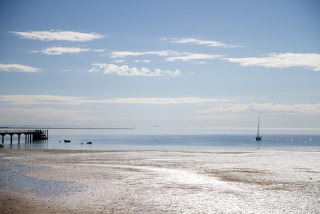 Email ThisBlogThis!Share to TwitterShare to FacebookShare to Pinterest
Labels: anchor, children, Life aboard 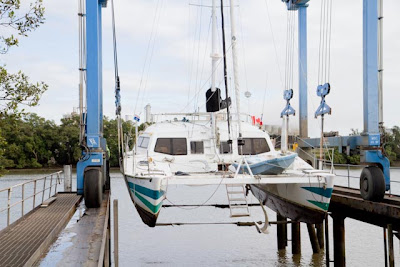 Hauling out is difficult, time consuming and expensive (and occasionally dramatic). So we tend to put it off. In fact, the last time we hauled the boat up onto dry land to paint the bottom was May 2010 (we had such a terrible paint job done at Abaroa’s we ended up careening the boat in September 2010 and adding another coat of paint). This time we were hoping to eek every last bit of use out of our paint, which we did, plus a year or so. About a month ago when scraped a barnacle farm off the boat we knew it was past time.
Anyone with a cat can tell you finding a place to haul takes a bit of research. Because of our width we tend to need travel lifts designed for really big boats—which leads to a really big price. Our strategy is to hunt out smaller-extra wide lifts in industrial boat-yards, which means we end up in interesting places. But the price tends to be slightly more manageable.
This time we ended up in Brisbane Marine Industry Park on the little lift—which Ev had carefully measured and saw we *just* fit on. Though it was a narrow slot, and the current was on our beam, getting into the lift was drama free (yay!). Once the boat was out (Maia: “Oh, I love the smell of a boatyard!”) and we looked over the hull (Evan to yard worker: “It’s not so bad, is it?” Yard worker with bemused look: “It’s filthy.”) we were moved to our spot and the work started. And so did the rain. 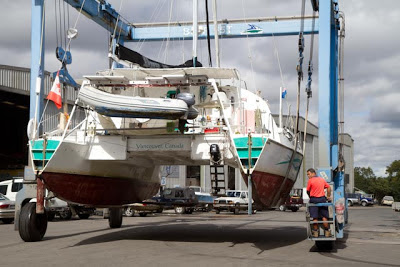 Winter in Brisbane is dry season. You can ask locals and many will tell you about years that went by without measurable rain in June or July. This year though: record breaking. It’s been raining so much it seems to have thrown the weather forecasters off their game. The weekend, which was supposed to include an occasional shower, turned into one big rain fest. We ended up draping the boat with everything tarp-like we own (including the tent) in an effort to keep the hulls dry enough to paint.

Then we ran into another problem. North American power tools don’t run on the Aussie 240 outlets and when it rains non-stop there isn’t much sun available to charge solar panels. A quick trip (with a borrowed car) to the hardware store for a battery charger (and more tarps) solved the problem though. 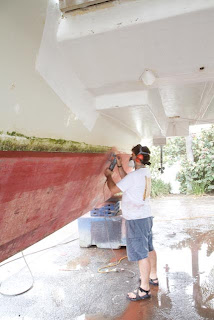 Once we were set up it was time to start sanding. Problem #3 was the discovery that 18 months in brackish water had lead to the development of some osmotic blistering. We had the same thing happen on little Ceilydh after her time in the Rio Dulce—not sure of the science behind it but the blisters were pencil eraser to dime sized and none went into the glass. We treated them by popping them open, rinsing them well, and then any that need filler after sanding were filled.
Next came a couple of coats of paint, a few minor repairs and after four days it was back into the water on a bright sunny winter day and out on the bay for a short sailing holiday.

The paint is supposed to be 30 month paint—which I’m sure we can stretch….
1 comment: