Boats Break; living on them is stupid

Last night while making dinner I switched on the light over the counter and got, nothing. No, there was a faint glow, and if I squinted, I could chop carrots. Then, when I went to rinse the beans, I had another problem, no water. Our water pump has been cycling for no reason—so we need to turn it off when not using it. So up I went, across the cabin, into the other hull to turn on the water, then back to the sink to rinse the beans, then back to the other hull to turn off the water, then back to the beans, only to realize I’d forgot to put water in the pot to cook them. I called to Ev to flip on the water but he and Maia were dealing with a deflating dinghy so back I went…

There does seem to be some sort of law on boats that when one thing goes on the fritz, several more follow suit. On our first boat we had it happen many times, but the most significant occasion (read costly) was when we reached Panama. First the rigging needed replacing, and then the depth sounder died, then the windlass—but my breaking point was when the stereo stopped working. Using a lead line to find the depth and pulling up an anchor by hand are two old-school sailing traditions I can cope with if required—but I’m wasn't quite up for listening to Evan singing sea shanties.
Last night’s breakdowns were not in the same league as Panama—a new light fixture, tinkering with the water pump, slapping a patch on the dinghy (if we could find the leak) are all affordable—just time consuming. But it made me realize how much of our boat chore time is spent in triage. Even when were not actually going anywhere, most of our efforts are spent just trying to keep things functioning and afloat. While Evan worked on the inflatable he had to step over the carcass of one engine, past the brand new one that’s waiting to be installed and fish for tools in the projects-under-way pile.

It’s no wonder really that heavily cruised boats go into refit every few years (or every few oceans). And last night as we tinkered and fixed, while trying to catch up on each other's day and actually eat dinner, it all felt frustratingly endless.
But afterward when we turned on a Christmas movie (at least the computers still work), and started to hang up our lights and ornaments, and watched a quarter moon rise up over our current city, the small and not so small inconveniences began to feel manageable. The to-do list may grow at the same rate as mildew (time to add de-mildewing to the list again) and boat stuff may break at a rate that leaves us feeling we are always a few steps behind, but the reminders of why we live such a challenging life are always there: When we can stop fixing stuff long enough to lift our heads and look out past the bulkhead that needs painting and at the world we've made such an inconvenient journey to see…
17 comments:

Email ThisBlogThis!Share to TwitterShare to FacebookShare to Pinterest
Labels: boat repair, Life aboard

The following is an email I sent to friends on s/v Totem who have been cruising Papua New Guinea and just arrived in Indonesia today. During their time in PNG I have been weather guessing for them since I have a fast internet connection aboard and they had basically only Grib files via sailmail.


I sent this email 22 November.  What I describe became Super Typhoon Bopha hitting the Phillipines 4 December.  Frankly I was lucky to notice this event so early in its development but all the signs were there. 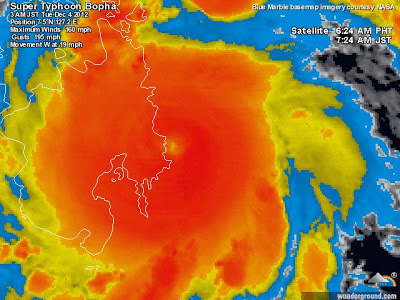 When I write a forecast to them I usually jump back and forth between weather websites and then gather my thoughts and write. This happens to be an unusual email because I was writing as I was looking.  Very stream of conciousness. And sorry for the shorthand - when sending emails via sailmail (where every character counts) I try to be concise.


Wx : to your NE there is a wee CLOSED low that pops up next Friday on ECMWF model. GFS has it further east (more N of Soloms).  It is persistent so probably not a model artifact. When I see closed lows so close to the EQ I pay attention.

Whoops. Looking at GFS precip it's really moist and spiraling.  Serious L? Cyclone? ECMWF 500 mB has it right around surface L (reinforcing), advancing to N of big island PNG next Sunday (2 Dec).  So I've got a closed Low, close to EQ, warm water, spiralling, etc.  This is one to pay attention to folks I think.  More attention over the weekend. Spidey sense is tingling on this one.

OK. Checked GFS wind gribs (something I sometimes do last). [eventually] Tropical storm force winds at least, located at 5N-10N 150-140E heading WNW so not a threat to you. Pull a wide area sparse GRIB starting +96 hrs out if you can with sailmail and you'll see it clearly. Storm swell will start arrive maybe next Wed. 14m seas at core of storm! 1st time I've seen Passagewx just print a number on map instead of using colour legend.

The People We Meet 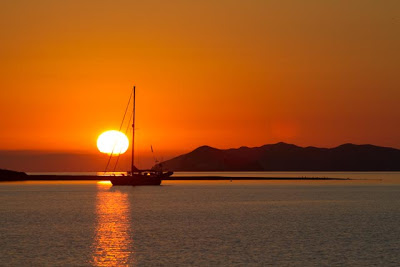 If you ask cruisers why they cruise, the answer, right up there with sunsets and beauty, will be the people they meet. We have become fast friends with people we would never have ordinarily crossed paths with (republicans!), met minor royalty and encountered major politicians, we’ve also met celebrities (though mostly ones only known to a unique subset of people).

One of our favourite ‘you won’t guess who we met’ stories happened on our first trip. We were in a funky health food restaurant in isolated Bahia Ballena, Costa Rica eating an insanely good salad (four kinds of lettuce!). You have no idea what this means unless you cruised that area in the mid 1990’s when iceberg lettuce, wilted cucumber, over ripe tomato and a slice of onion constituted the only ensalada we saw…

Being the only people in the ‘yacht club’ in a seemingly empty bay we couldn’t help but wonder who had the foresight to grow lettuce (and open a yacht club). The question lead to meeting Honey who told us she was an ex-cruiser and that she and her husband along with friends had built a Brown Searunner 40’ tri in Oregon, then sailed down the coast, finally stopping in Costa Rica because the family had grown from five to nine kids and they were out of money. And you know—one thing led to another and they started the yacht club, bought most of the bay to save it from development, and sent some of the kids off to Ivy League schools to polish off the homeschooling…

I don’t know about you—but one thing has never led to the other of owning and protecting some 170+ acres of prime Costa Rican waterfront for me. Not even close. So being nosy I asked Honey what she did—she was a midwife and was helping one of her (extremely well-educated) sons work with local farmers to promote organic (mixed canopy, fair trade) growing—which while noble, wasn’t explaining how a family that used to camp on shore and swam to the beach because they didn’t have a dinghy now owned the beach.

So I asked her if her husband had some other job. A few minutes later we were introduced to Heart, an inventor. A bunch of you sailing types are about to nod and say, ‘ah… I get it’. Which is what Evan said. I, however, shook hands with a bare footed, shaggy haired mountain man in a sheep skin vest and decided drugs were involved.

But no—Heart didn’t grow drugs—instead he took the nascent technology of Nicolas Tesla, and developed a reliable way for 12 volt DC power (stored in our batteries) to be converted into a 120 volt AC current for running 120 volt equipment and then manufactured technology that would help local farmers. Not to mention pretty much every cruising boat in the world. Heart Interface ring any bells?

There’s more to the story—I loved the bit about how they used the power from the first inverter to power the tools to build the next ones, and how without a dinghy they swam the inverters to shore—holding them above their heads… The story cumulates with a power circle on the beach as Heart and Honey put it out to the universe that they wanted the technology to reach the people that needed it, and it ends with a partnership with Rob Trace and the purchase of a whole bunch of vulnerable land… So I could go on, but the true purpose of this post was really to tell about another meeting, a more recent one. 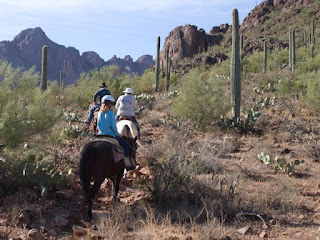 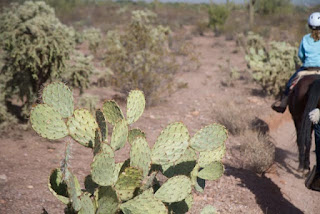 Two years ago I was on an assignment at White Stallion dude ranch with Evan and Maia. An amazing experience that was so much more fun than expected. Even Evan, who claims not to like horses, was a convert.

The only person we met who wasn’t loving the whole horsy thing was a writer called Caroline Lawrence. She was at the ranch as part of her research for a series of books for kids about the Wild West. She told us it would be her second series, the first The Roman Mysteries, was finished and she was moving on to a new theme.

Maia is always eager to learn about new books—so she quizzed Caroline about her books. And Caroline quizzed Maia about horse back riding and how she was experiencing the west. It was a nice exchange and we enjoyed each other’s company over the days to come and then the whole thing may have been forgotten if it weren’t for email.

We’ve met a lot of writers—but Caroline, it turned out (thanks google), was in her own league. If you have a preteen you may know the books (more likely if you are British) and once Maia got started on the Roman Mysteries she was hooked—a challenging addiction when you are travelling all the time and finding book #10 in a series is even less likely than finding four kinds of lettuce. Over the next year we emailed with Caroline a few times—confirming titles (they change from one country to the next) and checking in. Then just the other day this arrived: 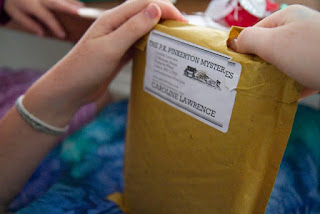 Caroline’s new series, The Western Mysteries is up and running and Maia now has the excellent opportunity to review the new books. She’ll be sharing her thoughts on Amazon in the weeks to come.
I’d share a picture of the latest book and the fantastic inscription—but it seems it’s so precious the book's been going everywhere with Maia…