Landfall Tobago--we're in the Caribbean, man! 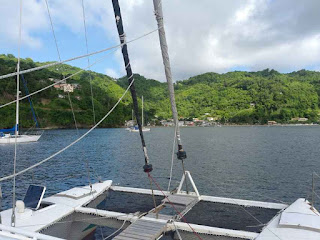 I saw the lights of Tobago when I came on watch last night, and as we rounded Marble Island and headed toward Charlottesville, we entered the Caribbean Sea. Heading to shore was like a cruising cliché: reggae drifting through the streets; the air heavy and warm; and colours that looked so bold and textured they bring to mind a black velvet painting. Formalities (once we assured them we hadn't arrived in Tobago outside of office hours) were easy and friendly. After a yummy lunch ashore the plan was to head back to the boats and swim and nap before celebratory sundowners. This is our 24th country and we've entered our 8th year of voyaging: 30,000 miles of new places, new friends and great adventures. Our afternoon plans changed when we were approached by a guy on the street who was looking for the 'Canadian family'. Evan had gone off separately and discovered the best wifi in town is at the Pearl, which is run by a Canadian woman. Timothy, her son, had befriended an Irish/Brazilian/Australian family and the girl on board was desperate for a friend--so he was playing match maker. The connection was convoluted, but as cruiserly as they come. Meeting new people based on the 3rd, 4th or 5th degree of separation is just part of the charm. So after a brief introduction at a new boat, 'here, we brought you a friend' Maia spent time with a new friend, I luxuriated in the pleasure of jumping off the boat in clear warm water and Evan found enough internet to get some work done.

The Many Toyotas of Suriname

We spent a lot of time driving around the capital of Suriname. About half the population lives there - and the traffic is pretty bad. I started noticing how many different models of Toyotas were around us, most I had never heard of. They mostly drive on the left, and we figured a lot of these cars were used ones imported from Japan. For a interesting read about why used Japanese cars are exported all over the world, even to far away Suriname, read the Wikipedia entry about Japanese car safety inspections. They are frequent, costly, and stringent (no rusting allowed on springs for example). It gets very uneconomical to keep a used car more than 10 years, and so a heavily depreciated car will be exported to a third world, right hand drive country like Suriname. Or New Zealand. Just kidding New Zealand we love you. And if you're going to buy a used car from overseas, a Toyota is usually a safe bet. It became a game in the slow traffic to find models we hadn't seen yet. A good day would get us half a dozen, a slow one only two. Without further ado, the collected Toyotas of Suriname: Alphard Allex Aristo Avensis Auris Avalon Blade Belta Carina Caldina Carib Chaser Crown Corona Corolla Camry Corsa Demio Estima Fielder Funcargo Harrier Hilux HiAce Isis IST Ipsum (good looking compact wagon) Kluger Lumiere Land cruiser Light Ace Mark X (flashy RWD sedan) Mark II Noah Opa Passo Parade Premid Premio Precio Porte Prado Platz (one of our rental cars) Ractis Raum Rav4 RunX Starlet Soarer Spacio Sprinter Tercel Tundra Voltz Vitz Voxy Vic Vessona Wish Windo (like the Samuel L Jackson Star Wars Jedi charactwer Mace Windo) 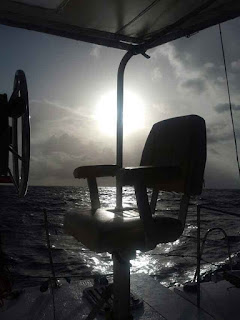 Evan woke me with a whack. Finding me asleep beside him when all indications were that we were sailing (the banging, crashing and whooshing indicated we were going upwind at good speed) led him to question why I wasn't on watch. He had also been asleep but somewhere in his caveman brain he knew someone needed to keep an eye on the cave, err, boat. The answer, of course, was Maia was on watch. While I could empathize with the fear that woke him (I once woke during a storm; upset no one was keeping anchor watch. Evan sent me to look out our curtained window so I could reassure myself our apartment hadn't dragged) I resented the lost sleep. Passages under 1000 miles feel pretty routine these days. I still prep food for the first two nights, we check weather and carefully plot a route-but there's less anxiety. It's possible to just pick-up and go- timing our departure for a working-hours arrival in a whole new country. Even still, I got up and relieved Maia. Peering into the night for squalls and way ward fishing nets. The passages may have become routine- but the same deep instincts that woke Evan keep us prepared.

Not Dead Yet--adventures in Suriname 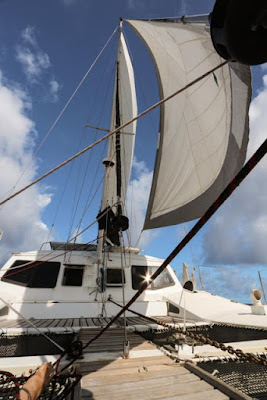 It’s been pointed out that I left off with us in a squall, 100 miles from the Suriname River and then went quiet. Sorry about that.

Navigating up the river was straightforward—we came in on the flood and rode it 30 miles to the moorings at River Breeze in Domburg. There we met the marina owners and settled in to the welcoming space with its friendly restaurant, well-stocked book exchange, pretty pool, clean showers and washing machine: Pretty much a cruiser’s paradise.

Our first full day was spent taking the bus into Paramaribo (and learned that buses are cheap, crowded, irregular and slow—we opted to rent a car after our first effort to economize). In the city we checked in; a surprisingly quick and easy procedure for us which turned out to be the exception, rather than the more typical experience. Then we hit a clinic to have my ear infection taken care of. $45 US and a trip to the Apoteek and I had a fistful of new antibiotics. Then it was off to the grocery store.

It’s been five months since we’ve been in a store that boasts more than four or five types of fresh fruits and vegetables, fresh milk or a selection of cheese, baked goods and chocolate.

While most tourists probably hit a grocery store now and again for snacks or supplies—in our first four days we went to at least six different shops. We’d slowly wander up and down the aisles admiring options of things we’d long run out of, or never knew existed: real fruit concentrates from the Netherlands, tonic of a known name brand, corn tortillas, fair trade chocolate, sesame oil, bagels, fresh anything…

Who needs a museum?

The hardware stores, chandleries and supermarkets might seem like culture enough, but we did spend a day as tourists; visiting the main cathedral, the rum distillery and Fort Zeelandia, which was originally built by the English then taken over by the Dutch. Most of our time though has been spent trying to decipher Dutch names (why so many letters?), eating fresh tropical fruit (mmmm) and navigating the medical system.
Just after I finally recovered from my ear infection and we were starting to plan an inland trip to the Amazon River basin-Evan developed symptoms of a heart attack: moderate squeezing pain in the chest, left arm was tingling/numb, he had some edema (swelling) in his feet and ankles and very high blood pressure. The marina owners provided me and Ev with a ride to the hospital and he was quickly admitted into an overwhelmed emergency room.

The experience was intense--the doctors train in the Netherlands, so that was good, but the vibe is developing world. It was the last day of Ramadan, and a holiday, so there were a number of well-dressed people in distress. At one point several ambulances from a car accident arrived--one of the young men died and there was a very public visitation/mourning in the small emergency room. He was a beautiful young guy and looked flawless (Ev saw the whole process of doctors working on him etc-it's a small emergency room) the disbelief in his death was raw and overpowering. At least 30 people were in to see him and were wailing.

Not long after this, the head doctor let us know that while Evan wasn't showing classic signs of a heart attack-he wanted to admit him for observation and to see how he did through the night. The initial EKG was negative (i.e. didn't show any heart irregularities or damage) and they did some initial blood tests which were also negative. But the next day one enzyme marker (CPK) went quite high, which can be a symptom of a heart attack. At this point the doctors admitted him to the cardiac unit for an angiogram-which they (English being a second language-and us not being versed on heart attacks) told us was surgery, not simply an exploratory procedure.

Communication was an issue for both Evan as the patient and me as the family. When I got home from the hospital I realized I had no idea *which* hospital I had left him in. The next day, when I called the hospital to track him down, I was told to come in and look for him-starting with where I'd last seen him. Payment had to be made in advance of the procedure-and my last contact with Ev and his doctors (before I lost them again…) was that based on the blood test he had definitely had a heart attack and needed immediate surgery and likely a stent-but first I had to pay.

Suriname is in a state of economic distress. Bank machines only give out <$200 at a time credit cards aren't accepted at any businesses (or the hospital) and the currency is devaluing on a daily basis. I was asked to pay a deposit. Initially I was asked for $4400 Suriname $$ or about $750 US, but when I returned with that amount I was told that because of the chance of Evan needing more intensive care in I'd need a deposit equalling 6 days in the hospital's Coronary Care Unit or $1200 US x 6 = $7200. And I'd need it by 7am the next day (it was now past bank closing) or they'd delay his surgery…

Eventually, the hospital accepted what I was able to pull together with the huge assistance of Ley and Neil (about $5200 US-we eventually were refunded $2200 so the total cost of care came to $3000). Ev had the angiogram and gleefully learned he has the arteries of a much younger man and that aside from the puzzle of the increasing CPK #'s and high cholesterol that needs treating, his symptoms were likely caused by some type of esophageal spasms-a very common source of misdiagnosed heart attacks. 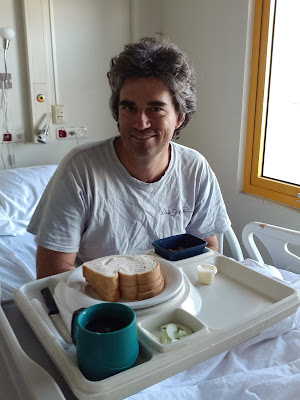 He left the hospital as soon as he had recovered from the angiogram--something about noisy roommates, a 4 am bath time and the food at the place being a disappointment. Most meals consisted of four slices of bread and a condiment.

So we're back at home on the river-monkeys in the trees, birds overhead. We'll be leaving for Trinidad and Tobago in a few days: Our touring in Suriname limited to Paramaribo and the hospital. But we're all healthy and happy-which we were reminded is what really counts.