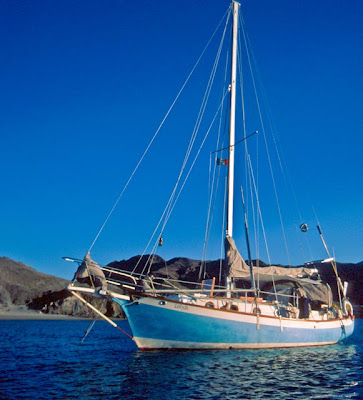 Evan and I have cruised before—which you may have picked up from the odd reference here and there.
The last trip started in 1995 when we were in our mid to late 20’s. We had a Stan Huntingford designed Fortune 30, also called Ceilydh that we cruised and lived aboard for eight years.
That trip took us from Vancouver, up to Alaska, down the US west coast to Mexico (where we spent 18 months) down through Central America and the Panama Canal. From there we headed up through the Western Caribbean and into the US, where we lived aboard in Annapolis, MD for four years.
Our plan on little Ceilydh had been to make an eastbound Atlantic crossing—but after adding a baby and a cat, who grew much bigger than expected (and the baby grew too), the little boat seemed even smaller. So when Maia was 14 months old we sold little Ceilydh and headed home to Vancouver.
Once home the hunt was on for the next boat—a boat we’d already decided would be a Catamaran