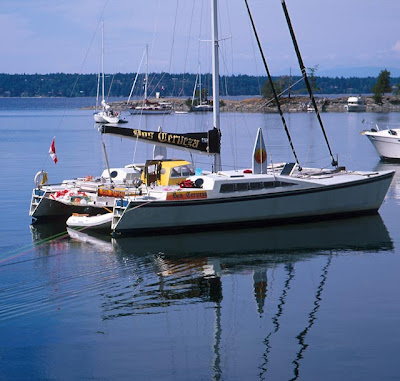 Ceilydh is a Wood’s Meander 40’ Catamaran that was built on Gabriola Island and launched in 1987. By the time we found her in 2004, her original owner had passed away and she was languishing at a dock growing moss and providing refuge for mud wasps.
Somehow, Evan looked at her and saw the bones of a good cruising boat. So we made a ridiculously low-ball offer on her, then sailed her for a season and decided what she’d need to make us happy.
Then came the design and four years of construction. Evan put in one or two days a week, all year round, sometimes in terrible weather. We had loads of support from friends and family—but on the worst days, in the nastiest weather, it was just him and his commitment to our dream: