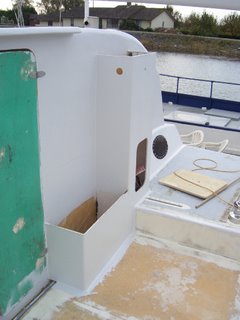 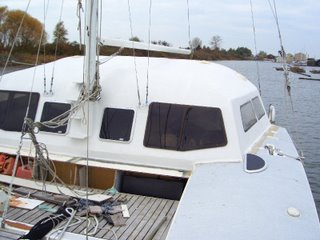 We now have some primer on the cabin. It looks much better than I had thought, now that the fairing compound is all covered up. Lots of little pinholes, a few areas where it isn't very fair, but overall I'm quite pleased. It also decreases the "visual bulkiness" of the cabin to have it painted.

Today I was sanding the primer. Nice high build epoxy, but it's hard stuff. I'm using 150 grit and it eats discs pretty fast. But it's very smooooth when you do sand it. Very nice tactile feel on the rounded corners. Thank god I don't have to sand the whole cabin top (which will be non skid) because it's half the surface area of the whole cabin.

The cockpit shot here has the battery box/see over the cabin step/bench seat shown.
1 comment: