Diane:     Is an award winning freelance writer who wrote the Complete Idiot’s Guide to Sailing and has contributed to dozens of sailing magazines in over six countries. She also regularly contributes stories and photos from her sailing journey to publications including BBC Travel, Men’s Journal, National Geographic Travel and Saturday Evening Post. Self-trained—she specifically developed her freelance career as a way of earning money while sailing. www.DianeSelkirk.com

Evan:     Before setting sail Evan worked as a yacht designer—and was involved in projects as wide ranging as ice-breaking life boats and Volvo round-the-world yachts. He designed and implemented all the modifications on Ceilydh—and was super happy that we didn't sink when we went back in the water. On board he works remotely as an engineer and hands on as an expert in all things that require he get dirty, dusty, wounded, smelly, or shaped into a pretzel. He also takes many of our photos.

Maia, 15:     Was born aboard little Ceilydh—her parent’s first cruising boat, and has spent most of her life at anchor in remote countries. She was happy to discover that she went on to make friends all over the world. She even enjoyed a stint of ‘regular life’ when she went to school in Australia but has mostly 'boat schooled'. She has a unique perspective on cruising which she’s shared in magazine stories and on her blog.

Charlie the Cat:  Charlie joined our lives as part of a foster family of six shortly after Travis the Mexican Boat Cat died. We never planned to cruise with another cat until after visiting Australia, but Charlie just sort of stayed, even though all his sibling and his mother were adopted...

He's surprised us all by making a great boat cat--although he does occasionally get seasick. He did take a short break from the boat while we crossed the Pacific and rejoined us as crew in Oz. 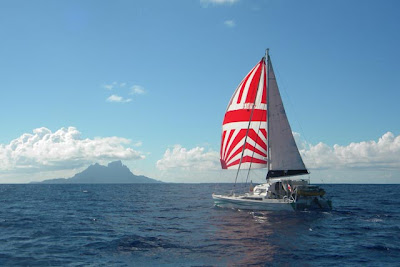 What kind of boat is that?
It's a Wood's Meander 40' Catamaran (heavily modified) called Ceilydh, there's more about her on the page called About the Boat.
Ceilydh (pronounced Kay-lee) is a Gaelic word that means celebration or social gathering, and it's derived from an old Irish word that means companion. As a boat name it has grown to mean that our boat is the companion that gives us access to a life of celebration.

Where have we sailed? What's next?
We left Vancouver in July 2009—went north into Desolation Sound then down the coast to Mexico.
We're spent the summer of 2010 in the Sea of Cortez and headed across the South Pacific in 2011 before landing in Australia. After a couple of years in Australia it was on to SE Asia, then across the Indian Ocean to South Africa, across the South Atlantic to South America and now we're on the home stretch back to Mexico.