Once you leave Santa Rosalia it's almost 80 miles to Cala San Francisquito, the next good anchorage. Making it either an overnight, or a very long day passage. The other detail that you need to factor in, is the further north into the Sea you get--the weirder the winds, the stronger the currents and the higher the tides. We pretty much ignored this detail, and when the boat hit 12 knots while sailing upwind in current riled seas that had 30 knots blowing across them, I started to wonder if a big heavy monohull might be the more comfortable way travel in conditions that changed seemingly every few minutes.
A few hours later, when we should have been sailing downwind at 6+ knots, but were crabbing across a channel at just under 3 knots, I found out from the folks on Hotspur that they had, had just as wet and uncomfortable a ride as we had. Strangely it made me happy to know none of us were terribly comfortable on the beautiful trip..
Today though—I've pretty much forgotten any discomfort that came with getting here. We're tucked into the calm little inner bay with Hotspur and two other boats. The air temp is a few degrees cooler than Rosalia and the water is clear and blue. On the night we arrived, which was Maia's birthday, there were fireworks on shore. We ate cake and drank Sangria while the sky lit up.
You could pass days in a place like this and lose track of the hours and then the weeks. This morning Meri and I set off on one of the dusty roads past the three or four buildings that make up the settlement and walked until we hit a long exposed beach with crashing surf. On the way back we passed a pile of oyster shells—and admired the mother of pearl interiors and wondered about the black pearls they may have contained. Later in the day Evan and I set off for a dive with Terry and Dawn from Manta and learned to recognize black coral and how to negotiate a strong current. Tomorrow I plan to hike along the ridge that borders the anchorage until I reach an old stone fence that had been a mystery to me until Dawn told me what it was for.
The fence is strange and out of place. Built painstakingly on the side of a steep hill it was once a cattle enclosure. In the early days of the settlement, before there were roads, they raised cattle around here. Boats would come for the cows, but they were too big to make it very far into the bay. So the farmers would drive the cattle along the ridge and down into the fenced pen, and from the stone pen they somehow were driven straight downhill another 30 or so feet and into the water—there the waiting boat would lift them by slings into its hold. 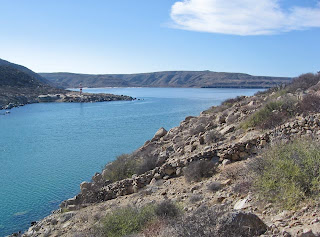 My guess is the cows didn't like it. But the old stone fence is still beautiful.
----------
radio email processed by SailMail
for information see: http://www.sailmail.com

What a wonderful post. I so want to be there with our family, doing just what you are doing, hiking and exploring.