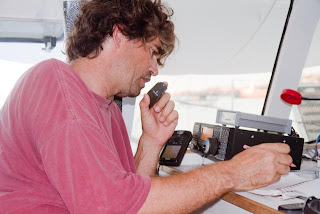 If you read anything about cruising, one of the terms that tends to come up over and over is “radio net” or just “the net”. The term refers to the short and long-range radio programs that happen on VHF, SSB or Ham radio. The nets are designed to help cruisers share relevant and interesting information. In the case of the VHF nets, the focus is on orienting cruisers to a new town, while the long range SSB and Ham nets keep us up to date on weather and let us keep track of our friends.
The cool thing about all of the nets is they are run by volunteers. This is a pretty impressive feat when you consider that a cruising region may have as much as an 80% turnover in boaters from one year to the next. The only way this can work is if everyone who can, takes an active role.
Last night Evan jumped into the net control position on the Southbound Net. We’ve been planning to participate in one of the SSB nets for a while—but it wasn’t until Meri, from Hotspur told us that the Net Control party was well-worth attending (and only people who have done net control get to go) that Evan made the leap.
Basically the role of net controller is a host position. The net control facilitates the agenda and makes sure only one boat is talking at a time. I might be biased but I think Evan did an awesome job for his first effort (and based on her Dad’s good showing Maia is eager to give it a try at some point.)
While we don’t tune in to the net every evening we have found they can be a a great social outlet if we've been on our own for a bit—we’ve first ‘met’ several boats over the radio and began building friendships before even meeting each other IRL--in real life (as they say online).
Nets change times and frequencies every so often but fairly current information on which nets are going on in can be found here: http://www.docksideradio.com/west_coast.htm
The Southbound SSB net is currently:
Time: 0055  UTC
Frequency: 8122 kHz Upper Side band; then switch to 4054 kHz at 0115  UTC
Weather Briefing: at 0100  at 8122 kHz with Don Anderson,  except for Sunday night