Mahi Mahi for Me 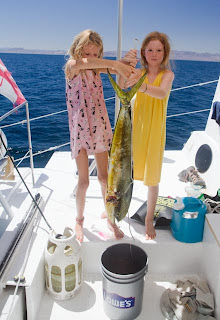 I have to say, I'm awesome at hooking fish. Pretty much every time I toss a line out something (mostly mahi mahi or dorado, these days) takes my lure. The problem tends to come with actually getting to eat the dorado. The first few dorado I hooked threw my lure—but then I switched to barbed hooks and worked on perfecting my 'getting them to the boat technique'.
Once I had a way to keep the fish on the line, it was time to learn to play them. I find hand lines easier than rods to use and like the control of pulling in hand, over hand—while trying to keep the fish on the surface. This has worked perfectly for about the past 5 fishes. The first time I sorted it out was with a female dorado. Once I got her to the boat I simply pulled her aboard. Once I got her on deck the fish was tired, I was triumphant and Evan was off in a locker... Somehow we had miscommunicated what it was that I was doing, and he went to find a glove to hold the fish. The fish and I looked at each other for a moment or two, then she heaved herself off the deck and swam away.
The next efforts had a similar outcome. I'd get the fish to the boat and we'd try one technique or another to land it and then the fish would swim away. Other cruisers began to feel sorry for us and just give us fish—because while some fish stocks are low, there's no lack of dorado these days and everyone (but us) is eating plenty of it.
Jim on Hotspur finally took pity on our situation and walked us through baby step, by baby step what to do when we hooked a fish. Then today—while making the long passage from Santa Rosalia to San Fransiquito (Yes! We've headed north.) we got to put his tips (and the gaff Hotspur gave us) into action. I played the big bull dorado for a bit while Evan got the gaff, and Maia and Carolyne grabbed the towel of death, a knife and a bucket. Then I pulled the fish alongside the boat (but not out of the water) and Ev gaffed him (simpler to write than to do), then Even brought him to the deck and we covered his head with the towel (which soothed him), while he relaxed Ev tied a line to his tail (overkill but...), then we lowered him headfirst (towel and all) into the bucket and Ev lifted the towel enough to see and slice his gills.
Okay, fishing is gruesome.
But with Maia a newly declared vegetarian it's the only meat she will consider eating. And it's her birthday today so this means rather than the spaghetti and veg sauce she had settled on (after every other option got ruled out due to lack of ingredients) she gets to have fresh grilled mahi mahi.
For our next post we'll write about our 80 mile sail. Evan figures he reefed and unreefed both sails 7-8 times through the early morning hours. Our peak speed was 12 knots (which was when we put the double reef in the main) and our lowest speed was two knots (we shook the reefs out for that one). Suffice to say it's going to be a low key b-day celebration. But we're all thrilled to finally be close to our planned 'summer' destination...
Fishing info: We use two 60' polypro hand lines to fish (one from each hull). One has a pink squid the other has a cedar plug. Fish like both lures pretty much the same. Although tuna tend to lean toward the plug and dorado seem to prefer the squid.
----------
radio email processed by SailMail
for information see: http://www.sailmail.com

Hope the mahimahi tasted sweet and the sunset rocked just for you today....

your friend, Lynda in SF