It seems like we're in the midst of the cruiser's birthday season. Maybe it's just the way the odds work out, but five of the current eight kids and several of their parents all have birthdays in the span of time we're up here. (And those who don't have birthdays have anniversaries…)
Right now the six kid boats are anchored in La Gringa to celebrate Amy from Third Day's 13th birthday (Jake from Savannah's 5th, Jack from Just a Minute's 13th, Maia's 9t and Caroline's 11th…) But while we were planning for Amy's birthday we (as in, I, it turned out…) realized Meri from Hotspur also has her birthday in just a couple of days.
As I mentioned in a previous post, birthday gifts are the do-it yourself type around here. The kid birthdays are pretty straightforward (Maia made Amy a beautiful journal) but the adult birthdays are a bit tougher. Last time we were out, we hit on the perfect gift-Evan, being a fine naval architect, is able to do an excellent line drawing of just about any boat. His drawing, combined with a portrait of the person on their boat (when we were able to develop them) turned out to be a huge hit with all the recipients.

These days he's not drawing as much, but we still find boat pictures, or even better, SAILING pictures are really well received. I also know Meri really wants a picture of Hotspur under sail. So sometime back when we were in Escondido we all made a loose plan to photograph each other under sail. The problem with loose cruiser plans is they rely a lot on serendipity, which is not always forthcoming especially when you have husbands in the picture...
So here we are two days from Meri's birthday and we haven't a single picture of them under sail. I mentioned to Evan that the trip to get to Amy's party would be the perfect time to get a sailing picture. Then I asked Jim to sail their boat to our destination (we were only moving 5 miles in light wind) and said we'd follow them out and take a photo or two.
When it came time to leave Evan didn't seem to realize I meant right then, and began making lunch. By the time I made my goal clear, Hotspur was 20 minutes ahead and almost half-way to our destination. While we hurried to catch up, our windless switch packed it in, again. As soon as we sorted that out, we got the anchor up and throttled ahead. Then I wrapped the dinghy painter around the prop and sliced it in half--setting the dinghy free while we drifted with no engine. Once we got the dinghy back and the prop cleared Hotspur had gained a half hour on us. So we left BLA at full throttle and started the chase.
Hotspur was clearly going to win. 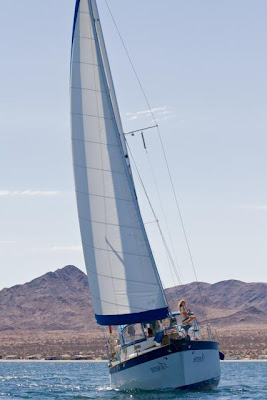 So Evan proposed he pursue them in the dinghy: An idea that seemed fine until he actually got out into the current and nearly became airborne in the short, steep chop. While he negotiated the waves with Maia, I tried to turn on the auto pilot to get the big boat sorted out. The auto pilot refused to work-so I watched him from the wheel and made running dashes to take down awnings and get the charts out-just narrowly avoiding putting us on the sand bar.... 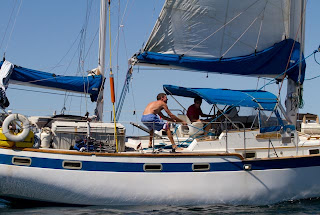 Eventually it was clear that because of the messy seas Hotspur would reach the anchorage long before Evan and Maia would catch them-so I called Jim and hinted to the fact we were really, really trying to get their picture. Right. Then. He took pity on Evan and tacked back toward the dinghy. Evan shot off frame after frame and the photo shoot finally happened. 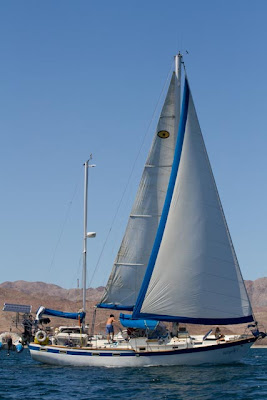 When Evan got back to Ceilydh he and Maia made a great mid-ocean transfer back onboard and then we promptly lost the dinghy. After making the second dinghy recovery of the day we were back underway. No doubt the four boats we were travelling in company with were wondering what the heck we were up to (you can't explain a mission like this over the radio because everyone listens in…)
A few minutes later we pulled into La Gringa, where our anchor wouldn't set on the first go. Because the windless switch is broken.
The photos are really nice though.
----------
radio email processed by SailMail
for information see: http://www.sailmail.com

Sounds like quite the adventure! But I don't see how it was Evan's fault :)
Blame the cat.

Where is the line drawing of OUR boat? (whinewhinewhine)

Sounds like a typical day on a boat to me. LOL

Okay, blaming the cat.
And Bill, you're right. The notable days are really the ones when nothing goes wrong. But I have to say, losing the dinghy twice in one day is a personal best.