All in a Name--Canal de Ballenas 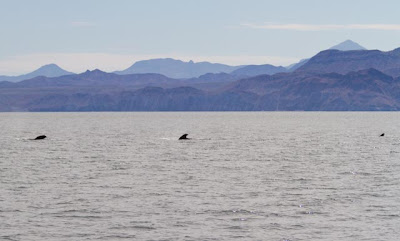 Most of the places we visit in the Sea of Cortez are named for saints or explorers—occasionally some places are named for their features or use. But like most things that were named long ago those names don't mean that much anymore. 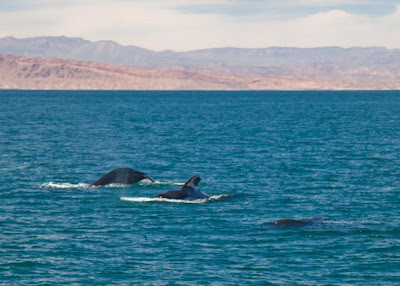 Neptune must have been smiling on us today though (or he appreciated the little fish rescue of this morning) because as we journeyed up Canal de Salsipuedes (Leave if You Can Channel) and into Cannel de Ballenas (Whale Channel) we saw a big pod of dolphins, then a pod of 5-6 pilot whales and then a pod of 8-10 fin back whales. By now we thought we had reached our whale quota for the week, or month, and as we compared our photos against the identification guides we savoured the experience. 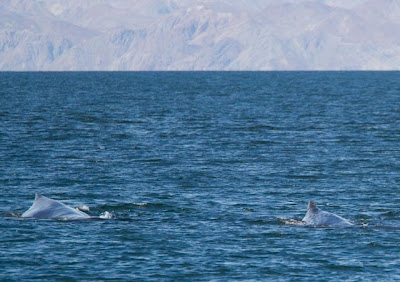 Whales are pretty easy to sight in the distance—especially on a calm day. And when I headed back out to my favourite lookout chair, I saw the unmistakable spouting of more whales in the distance. As the pod traveled south and we headed north we realized it was another pod of pilot whales—with their big fins and bulbous black heads they are easy to identify. This pod was much larger than the first and they stretched across our bows toward the shore and seemed as interested as us as we were in them. Just behind the pilot whales I realized there were much larger spoutings that had to come from a fourth pod. Within minutes we were amongst a pod of sperm whales. This was also a large pod and we watched the long sleek whales glide torpedo-like along the surface, before easing themselves under. It was good that we didn't learn until later that they are known to be aggressive to boats... 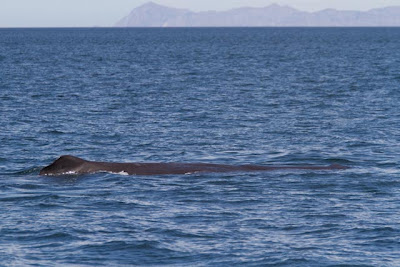 I don't think I can convey what it's like to travel through four pods of whales over the course of a few hours—but it's breath taking. We seem to work so hard to separate ourselves from the natural world, but when we stumble right into the midst of it, when we see how huge the creatures are and watch them interact with each other (and when we're lucky, with us), it's both humbling and magical.

Canal de Ballenas was probably given its name almost 300 years ago. And as I watched the final whale fade into the distance I wondered if the name will still be relevant 300 years from now.
----------
radio email processed by SailMail
for information see: http://www.sailmail.com

Wonderful experience and many thanks for sharing it with me today.