Our boat didn't come with any strong bow padeyes for an anchoring bridle.  We use a couple of spinnaker blocks for our bridle.  But they have a couple of drawbacks:  the blocks use chainplates that are not oriented the correct direction for an anchor bridle loads, and they are on the outboard side of the hulls, so the bridle chafes the hull a bit.  So we need a strong connection point on the inside of each hull.  It would be great if this was strong enough for our parachute sea anchor as well, and the existing spin block chainplates would be nowhere near strong enough for that.

I've noticed that older production cats often are missing these too, but newer ones are starting to incorporate them into the boat, usually at the ends of the forward cross beam.  I would be wary of using some of them for a parachute sea anchor though.  Most don't appear robust enough.  For ordinary anchoring bridles they should be o.k.

I could just go the easy way and get a couple of very high strength s.s. padeyes, add some internal fiberglass reinforcing to the bow and call it good.  But these padeyes are costly (> $100 each).  They also concentrate the load in a fairly small area which is not good for cored construction since there is no existing high strength core in that area.  It would be better to spread the load a bit.  And that's what the soft padeye design is designed to do.  The drawing below tells the story pretty well, but a bit of background in order.

The design load should be greater than the breaking strength of the 5/8" double braid nylon sea anchor rode, or about 15,000 lbs.  I will use a 1/4" spectra rope lashing for the connection to a bridle.  6 turns of 1/4" spectra have a breaking strength of around 44,000 lbs if you don't use knots on the loaded portion.  A lashing with a number of half hitches keeps the loaded part knot-free.  I'm sure I wouldn't get close to a 44,000 lb strength, but I'm also sure it will be stronger than the anchor rode too.

To secure the lashing inside the boat, a 6" length of aluminum pipe is used.  These are sometimes called "dogbones".  This gives the spectra a nice big radius to go around and spreads the load over a bigger section of hull.  The inside of the bow will have extra glass reinforcement added in the load bearing area.  Then I'll use a bit of grp pipe I have to protect the core and prevent any localized compression failure.  I'll also use a bit of round grp cover plate glued on the outside to spread any shear loads into the hull skin.

On a racing sailboat I'd just bodge a whole bunch of silicon caulking into the fibers of the rope and the opening and accept a bit of inevitable leakage.  I'll try that first, but if it leaks too much I'll probably fabricate a very light grp box to contain the leaks with a drain hole at the bottom.

Any questions?  Want me to design one for your boat? (Click on the picture for a better size drawing) 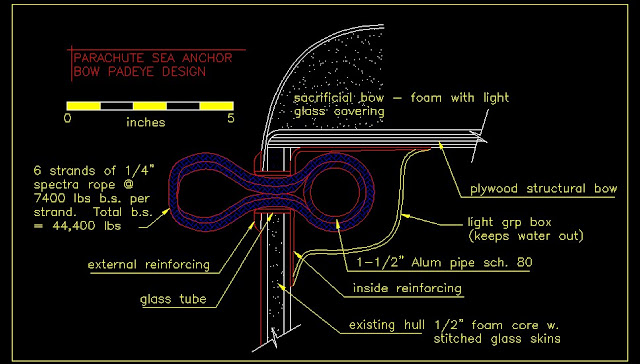