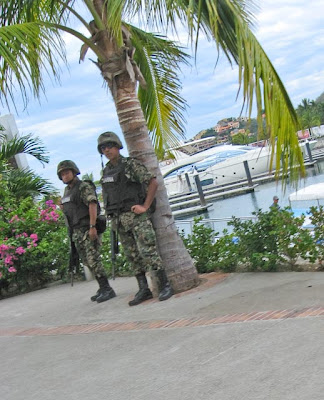 It probably shouldn’t surprise me so much—but a lot of the comments I’ve gotten about our life in Mexico this past year have had nothing to do with the incredible wildlife, or beautiful landscape, or even learning Spanish— but instead with whether a latent death wish is a requirement for sailing south of the border. Typically the comments come from people who haven’t delved beyond the hype and hysteria of headlines and are as likely to spend a vacation in Iraq as in Mexico. But enough of them come from people who would probably really enjoy Mexico that I thought I would share what I’ve learned.
Putting the headlines in context:
Mexico is clearly facing security challenge as the government grapples with the drug cartels. But this is not a country in the throws of a nation-wide violent war. Mexico's murder rate has actually been falling. The National Public Security System reports that in 2008, the murder rate was 12 people per 100,000. But in 1997, that number was 17. And most of these murders are concentrated in Mexico’s most dangerous locations: Juárez, Nuevo Laredo, Reynosa, Monterrey and Cuernavaca. Murder rates among average citizens continue to fall.
And because I tend to like looking up stats I can also tell you that Mexico's congress pegged the national crime rate at 1,248 violent crimes per 100,000 in 2007. There is no arguing that this is high — the average U.S. rate was 467 per 100,000 that same year. But parts of the United States are just as violent or worse; Detroit, Michigan’s rate was 2,289 per 100,000, while the big city we used to live near, Baltimore, came in at 1,631.
Looking at a map:
Mexico is a huge country that covers 758,449 sq mi—making it about 1/5 the size of the US. So reports of drug-related violence in Ciudad Juarez don't mean you're at risk in Cancun or Cabo. In fact both Cancun and Cabo (along with pretty much every other area popular with tourists (except Acapulco) are among the safest places in Mexico—and statistics indicate they’re often safer than similarly sized US cities. To put this in context, does knowing that Memphis has one of the highest violent crime rates in the US keep people from visiting Yosemite, or even Graceland?
We’re not the targets:
We’ve all heard the stories about innocent bystanders being hurt. But considering the surge in crime has been fueled almost entirely by a turf war over the lucrative trade channels that funnel drugs from South America into the US (Mexico itself isn't a big producer), the targets are rival drug dealers, police, political figures, and wealthy businessmen and their families. Foreign victims are usually caught in the wrong place at the wrong time. Out of the more than 1.2 million Canadian tourists who visited Mexico in 2007, the Canadian Consulate received 97 requests for assistance related to arrests, 22 requests related to assault, 23 related to deaths and 117 for medical assistance.
Traveling Smart:
From a purely personal perspective, I’ve never felt unsafe anywhere we’ve traveled in Mexico. We use public transit, go out at night and often walk long distances through unfamiliar places. We’ve also crossed the border at both Tijuana and Nogales several times this year and have been impressed by Mexico’s rigorous security precautions.
We’ve found Mexicans to be friendly, hospitable and helpful. But we also know there are dangerous places—we’re skipping Mexico City for now, and when we reach Acapulco we’ll be cautious about where we travel. We also take basic sensible precautions: not driving long distances at night, not wearing flashy jewelry, avoiding protests… That sort of thing
Don’t take my word for it, but also don’t get your info from the headlines. The US State Department has an excellent section on Mexico—which is kept up to date and highlights dangerous areas. Canada's strikes me as a bit more sensationalized and doesn't highlight the safe from unsafe as clearly but it also has good info.

Great post. We are headed to Mexico Dec.11th for three weeks. We also have always felt safe even in little towns, pretty far off the gringo trail.

I believe ignorance is one of the biggest problems facing this country.

It tends to be a preaching to the converted thing sadly... I have to say that reading any media reports on Mexico right now is awful--there are such nasty things being said. Especially when you read the comments sections.