Thankfully—not us.
But whenever a wounded boat limps into harbour, every boater tends to pause and imagine the what-ifs… 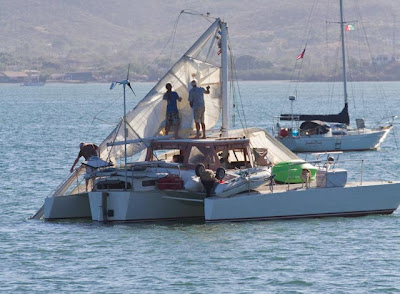 The story of this trimaran is a bit of a sad one. The boat is owned by a long-time Baja sailor. He decided that this was the year to sell it. He’s got a place on land. And as everyone knows, boats are a heck of a lot of work--especially if you’re a single hander on a budget and your boat is getting on in years.
Enter the family with a dream and a pile of cash in hand.
Old plywood trimarans are a favourite within a subset of sailors--mainly because they’re cheap do-it-yourself craft that (if you get lucky and get a good one) can jumpstart you into the cruising life.
The trick with buying a cheap DIY boat though is to go into the deal with your eyes wide open. Unfortunately a lot of people who buy the cheap boats are actually people trying to buy the cruising dream with out paying the full price and without a full concept of what it really takes. And in the case of this boat, the family that came to buy it decided to save money by not having the boat surveyed. The fellow buying the boat felt he knew enough about boats to survey it himself. 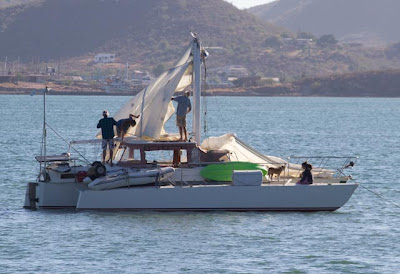 There are places to save money with a boat--but most people agree the survey isn't one. I know some very skilled and hugely knowledgeable boaters who would never survey a boat for themselves. It's too fraught. You're too emotionally involved right from the outset. It's too easy to overlook the obvious when you want a deal to work out.

But sometimes Neptune looks out for innocents. Because the owner put off sealing the deal. He wanted one last sail on his old boat before he decided if he was really ready to part with it.
So they all set out this morning. They were headed on an overnight passage to Escondido. Once they got in he would sell her. But five miles out the wind piped up. The old boat was making seven-eight knots. Then the starboard shroud chainplate came apart and the mast came down. 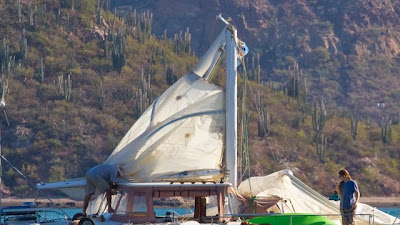 Fortunately it happened close to shore—before they hit the larger seas and stronger winds. And before night fell. No one was hurt and with careful actions they saved the sails. Happily the singlehander wasn’t on his own, and luckily for the family their nest egg and sailing dream isn’t currently in pieces.
But hurt boats suck.

Been reading your blog for a while now, Diane. Very nice! Sadly, we recognize the family in your photos. They're from Kauai and have been looking for a tri for some time. I'm glad they weren't parted with their savings on the deal.

They are a really nice family. Most people would have walked away after and experience like they've had--but they stuck with the owner and worked their buts off to save as much as possible when the mast came down. I hope the right boat comes along for them soon.