Reefing Issues... (A technical post by Evan, who's puzzled) 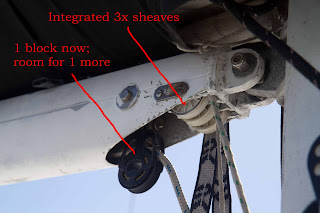 When we bought our boat it wasn't set up to reef the main at all. So when we added the cabin I set it up for single reef point lines--which worked o.k.. Then the One-Eyed La Paz sailmaker added a second reef and the line leading got complicated. 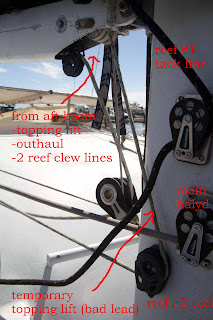 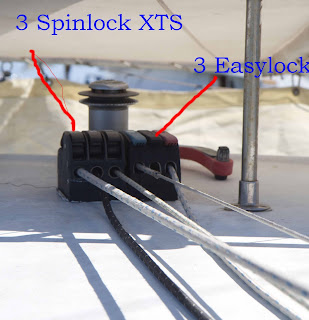 I've got 3 cheek blocks on the side of the mast for:
- reef 1 tack
- reef 2 tack (currently being used for topping lift but lead angle sucks)
- main halyd
I think these will all work ok though I will upgrade wee plastic Harken 57 carbo cheek block to a bigger cheek block for a reef.  They lead to the 3 Spinlock clutches to stbd.

My thinking is to use 2 of the integrated sheaves at the front of the boom for the outhaul/topping lift because they are less loaded than the reef clew lines. I would use the Harken block aft of these on the boom for reef 1 and add one more sturdy Harken block for reef 2.

The 4 lines coming aft would go to the triple Easylock clutch + 1 cam cleat for the topping lift.

My big issue is that I only have one double block below on the mast to turn 4 lines coming aft. The mast base is too low to directly attach blocks because of the curve of the cabin roof top. This is all background to my big question:  how do I reasonably attach another double block to the mast so I can run 2 more lines aft without lines fouling the existing double block?

I sent my question off to Jamie the Two-Eyed Sailmaker on Totem and got this response (we're leaning toward 3e but welcome further discussion):


Complicated, damn!
1.       First thought, not suggesting that you try major changes, but I’m not a fan of single line/aft led reefing. The longer line runs allow more stretch/chafe, lines clutter up the cockpit, and it maintains big stress on the gooseneck. Is it possible to simplify even 1 less line going aft, such as the topping lift – instead exit to a cleat on the boom? Or if the outhaul has a purchase inside the boom it can be cleated on the boom?
2.       Along similar lines (ha ha) if it takes 2 people to reef anyway consider removing luff reef lines and use the tack hook/dog-ear method. Doesn’t solve aft-led line problem, but I does simplify the whole affair.
3.       If you’re stuck and really need to run 7 lines aft (3 from stbd mast wall, 4 from mast base) a few options come to mind for the 4 mast base lines– though a little tough from the pictures to see how the double block attaches.
a.       Replace 2 sheave block with 4 sheave block (Harken?). Downside is different load/function lines running through same block system will likely led to lines binding.
b.      Use 2 blocks with 2 sheaves each vertically oriented (currently horizontally oriented). Each block base could be non-swiveling and shackled to a single large shackle (or stout O-ring) at the mast base. Use the 2 smaller sheave for the outhaul and topping lift lines / larger sheaves for leach reef lines. Binding may still be an issue, but maybe less so.
c.       Use 2 block, 2 sheaves each. Attach 2 Spectra (yes, I got it in there!) pennants to the spot where current 2 sheave is attached. Lead them forward, around the mast and back so that one block is oriented on each side of the mast (but just aft of the mast). This gets some separation between the blocks and puts the block a little higher (if that helps). You could also use some bungee cord to prevent each block from moving too far out of place when not under load. Be sure that the base attachment point is up to the lateral loads.
d.      Skip the fairlead approach and just bring lots of line.
e.      With boats moving toward lifting keels, why not go one up and set-up a dropping mast. The mainsail remains fixed at the mast head. Build a carbon column from the mast base to the bilge. Cut hole in bottom. Install 1203:1 purchase system for dropping/lifting the rig. Of course the shrouds may loosen a bit but the mast will be shorter, so shrouds become superfluous – like nipples on a man.
f.        Duct Tape!
g.       Real men don’t reef anyway you pansy.
h.      You’re in a catamaran, so what you really need to worry about – because you’ll be upside down – is reefing the dagger boards.
i.         You’ve read Harry Potter right? Skip the boat and use the flu network.

I forwarded this to my physicist spouse across the room. Let’s see what he thinks; it is beyond my ken.

Physicist spouse looks at pix and discussion, and notes that the two-eyed sailmaker skips the question and notes the massive complexity of the rig.

Now, I'm coming from performance catamarans, and I suggest (really) full batten sails, because they are easily luffed without damage from flapping and chafe and a rotating mast. With your stationary mast, your aerodynamic efficiency with a double reef closes on zilch, and the point of sails is to go forward, not push you sideways. My instinctive response is that you've spent too much time inventing new ways of doing something pretty unnecessary. If one piece of the spiderweb breaks, you've got jammed sail under storm conditions, followed by radical solutions.

SIMPLIFY. Cats easily adapt to rotating masts, with their wide stance, and if you use a blade mast (build it yourself), it's the last reef. I've seen cats your size run five knots under blade mast alone, in 40 kts of breeze

Good luck with your topological experiment.

Yes, e. is an exceptional plan, very good idea, a la Waterworld, but that's a big project to tackle before the puddle jump. I honestly favor 1., but if you don't like, what about using the mast pulpit (or whatever that horizontal bar is aft of the mast in one of the pics)? Is it farther from the mast than it appears? Would the lead work if you attached either the existing or desired block to it? Best wishes, looking forward to the solution post. Michael