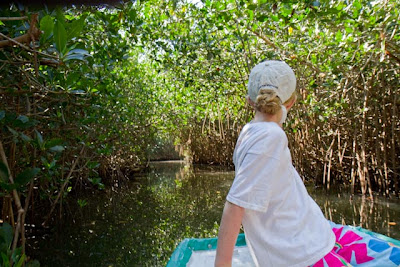 “This is how Disney’s Jungle Cruise should be,” Evan said, as the mangroves closed in around us. Any moment we expected to be ambushed by charging hippos or attacked by an anaconda, but instead we caught sight of an ibis, nestled deep in the droopy green foilage. After an exciting surf entry over the river bar we were now floating along the meandering river: the splash of fish, and the flutter of birds and butterflies gave us a hint to what lay hidden. 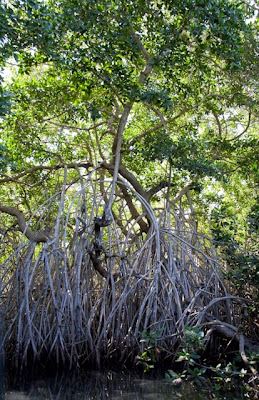 Characterized by lazy brackish waters and densely growing bush-like trees, mangroves are a frontier zone between land and sea, a harbour for an unrivalled diversity of life. Over half of Mexico’s 1050 recognized bird species have been sighted in the string of mangrove lagoons scattered along Mexico’s western coast.
Under pressure from development, and seemingly a waste of good waterfront, mangrove ecosystems are disappearing at a disasterous rate. Statistics from Greenpeace Mexico and the federal Ministry of the Environment and Natural Resources say that mangrove habitat in the country's coastal zones fell from 1,041,267 hectares in 1976 to 683,881 in 2007. By 2025 the country expects to have lost an additional 40-50% of its existing mangrove cover. 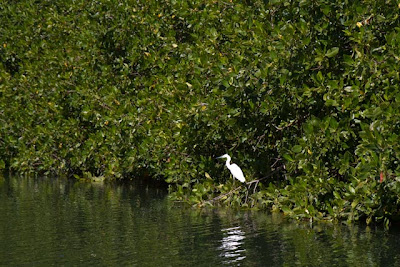 Tropical mangroves capture carbon, incubate numerous aquatic species, prevent coastal erosion, provide windbreaks from storms and shelter migratory birds. But tourist development, new subdivisions, pollution and lack of understanding mean they are at risk, despite a tough new law protecting mangroves that was approved by the Mexican Congress in 2007.
One potential saving grace of mangroves is they are very cool to visit. 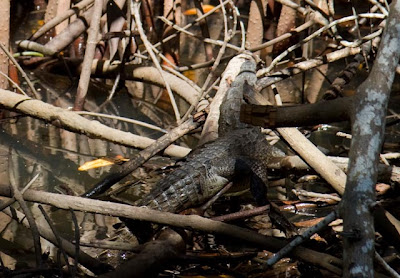 “Crocodile!”
We just caught a glimpse as it left its sunny perch and slid into the tea-coloured water. A few minutes later (after learning to scan deadfall in the sunny areas) we sighted our next crocodile, seemingly smiling in the sun. We all squealed and tried to position ourselves for a picture—but the current and the little crocodile’s reticent disposition, meant it was under water before we could snap a good shot. 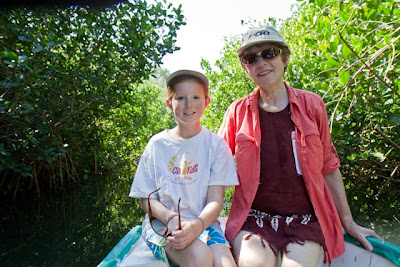 The end of the ride took us to a beach, surrounded by high fences. Just a year ago this was a popular holiday spot—with palapa restaurants, a smattering of homes and camping. Then its apparent long-time owner called in the state police and had the residents removed so he could begin development. Now it was under guard and we needed permission to visit the beach.
After our time at the beach we headed back to the dingy for the long ride back through the meandering jungle. As we left, I looked back at the fences and the traces of the buildings that had been plowed under when the army came to remove the beach-side businesses, and I couldn’t help but worry what modernization might bring to the mangroves. 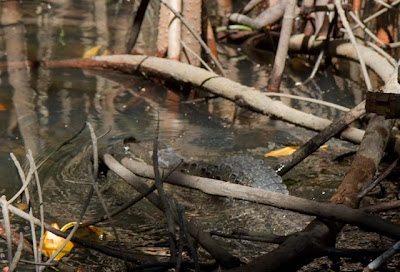 But then we caught sight of a crocodile and were carried away by the wonder of it all.

Mangroves are the best part of the tropics experience. Wildlife and fish and butterflies... Love it.

My heart breaks for the ex-residents and business owners of Tenacatita. I will miss the amazing fish rolls we ate there (stayed a month in 2003, our favorite place in all of Mexico). Just won't be the same when we are there next year.... Thank goodness the "jungle cruise" is still beautiful for now!

Sara, The whole situation is heartbreaking. It's hard to understand how it was allowed to happen...