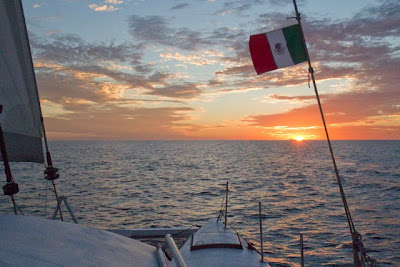 “Is it meant to be wet down here?” my step dad, Frank called from the head in the port hull. “There’s water all over the floor.”
Evan was dropping the main and I was off-watch and napping. We’d been traveling for almost 24-hours and were sort of used to my parents asking land-lubber type questions. So neither of us rushed to go see--who knew, it had been a bit rough and maybe water had sloshed out of the toilet, or maybe Maia was extra enthusiastic in her face washing. Frank called again, “It’s spraying all over...”
That made us jump. Evan hurried down and found the pre-filter housing on the spectra water filter had cracked and dropped right off. So rather than pumping water through the water maker, we were pumping seawater all over the hull.
Evan shut off the water maker and pried opened the overflowing bilge. We know units can fail and can make things wet—so we installed it above a deepish (for a cat) bilge. Evan grabbed the emergency bilge pump and started pumping the water into the shower sump (located just aft and technically where the bilge should be draining). Midway through pumping we both had the same horrible thought at once, “The charts!”
Just forward of the water maker bilge is a deep compartment where we store all our charts, and loads of spare electronics. It’s supposed to be a watertight compartment—but when Evan was doing some plumbing he breached the bulkhead with a hose, and rather than fixing it then he added it to his ‘someday’ list for repair.
Even before he’d pulled off the last cover board I could hear the sloshing.
Nothing sucks quite so much as half-sinking your boat—especially when you have witnesses. We had already had a challenging trip: the weather wouldn’t co-operate so we were a few days late heading south from La Cruz to Tenacatita. Then the weather we did get was chilly and the seas were big and lumpy—leading to an ‘are we there yet’ atmosphere that didn’t make for happy sailing. Now we were soggy and about to put wet crap all over the boat in the hope of drying it.
Evan fed the bilge pump into the bottom of the compartment and I started pumping—marvelling at how much water our boat could hold with no apparent change in her sailing ability. Then the bilge pump stopped sucking. Evan shook it and blew in it, but nada. So he took it apart and found some long lost Playmobil pieces had been sucked up inside. 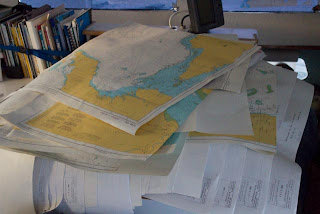 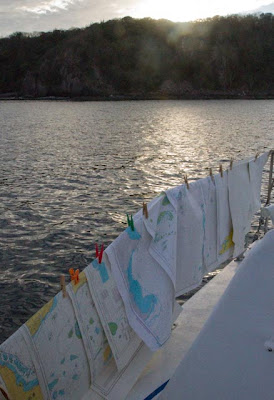 Once the compartment was dry we starting pulling out the contents and assessing the damage. New Zealand’s charts were soaked through, as were Central and South America (which I guess reinforces our plan to skip those destinations for now…)  The rest—barring a bit of Australia, were tightly enough wrapped in plastic that they were unharmed. The same can’t be said for our spares—we’ll need to test those in the days to come. 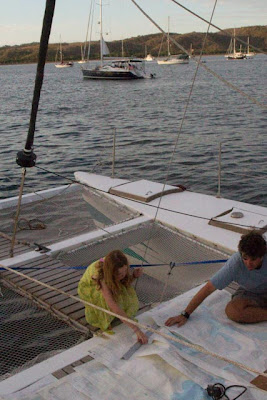 But considering how many times we’ve left the water maker running when we’ve headed to town or to a friend’s boat—we feel like we got off lucky (actually we sort of think it sucks that we always get to learn stuff the hard way, but whatever…). We think the water maker only ran for a half-hour or so after the housing failed but in that short time it pumped in a hell of a lot of water. 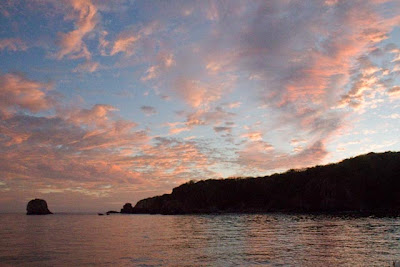 A few hours later we pulled into a gorgeous but rolly Tenacatita and started hanging out our charts to dry. We watched the sunset as we ate dinner. And late in the evening as I watched the Southern Cross rise over the horizon I couldn’t suppress the feeling that I’m just a little bit fortunate. As for my parents—they’re going to a hotel. They seem to think life is more peaceful on shore…

Ugh! I was completely enthralled by this post (in a "I hope it all works out kind of way.") So glad it did! Wow. Glad the boat is safe and you all are too. Tucking this post away in my memory banks. All the best!