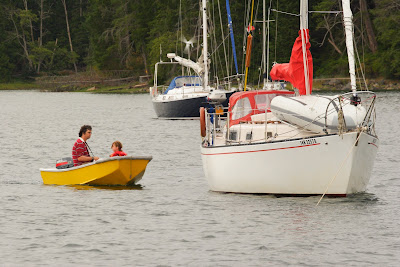 We gave up our car a couple of weeks ago.
We’ve been carless before and relied on our bicycles for transportation, but this time we’ve sold those too. These days, other than our kayaks, our primary mode of transportation is by dingy. And seems how we’re rarely at a dock, our dingy is even more important than a car. We use it for sightseeing, visiting neighbouring boats, scouting out good places to picnic and go grocery shopping.
It’s a system that works pretty well, when you plan ahead.
It’s less than perfect when you find yourself anchored 8-miles from the nearest settlement and discover you have no cat food. 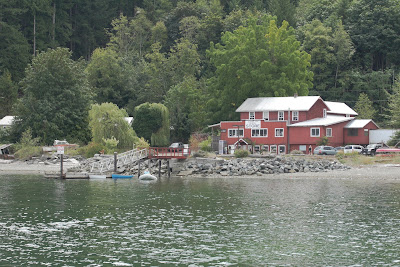 Seaside villages in Desolation Sound are well set up for boaters. The stores often have more dock space than land-based parking and are well stocked with appies and alcohol. What they don’t have are regular hours or easy anchorages. So when you’re 8-miles away, and you only travel at 8-miles an hour, the best option (after attempting to make something the cat would eat out of brown rice and tinned sardines) is to hop in the dingy (which goes twice as fast as the big boat) and head to the shops.

If you were headed to the corner store on an evening cat food run, it probably wouldn’t be a big deal. But when your outing takes you across two channels, past four uninhabited islands and up one sound - it’s called an expedition. It’s something you only do after unpacking three lockers and two cupboards (just in case there’s more cat food stashed somewhere you forgot), checking the weather report, listening to sea state reports, topping up fuel tanks, grabbing the handheld VHF, checking the chart for unmarked hazards and rocks, double checking that the dam cat won’t eat the glop you made, packing a light (just in case sunset happens before your return) and putting on your life jacket. 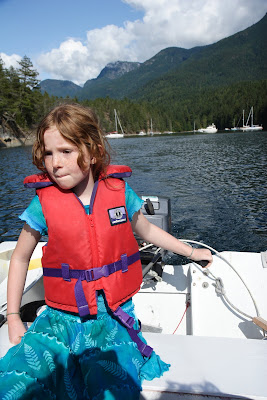 It’s safe to assume that the cat is not the least bit impressed when you make an effort like this on his behalf. But I’m grateful that we went with a motor on the dingy this trip – it would have been a bitch to row all that way.

When the cat gets hungry enough, he'll eat your glop. I remember running out of dog food... in Cuba.
There was a Canadian couple who actually sailed back to the Keys to get their dog food and then back again. Crazy Canadians.

Mean lady - first you complain that we teach him to swim. Now you don't think we should feed him...

Google said...
This comment has been removed by the author.
4:05 PM

Are you still using this dinghy? Any suggested improvements?