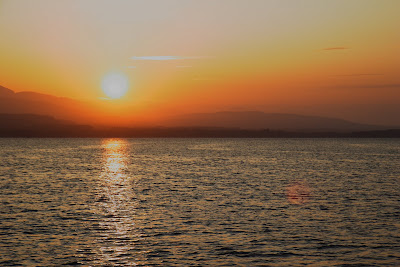 We first saw E in , tucked in out of the rain looking sturdy and homely amongst the sleek yacht club boats. Her old fashioned lines, tan sails and British flag piqued our curiosity. She was small to have come so far, maybe 27”. But as fellow bluewater cruisers, we watched her decks with more interest than those of the other boats. We hoped to catch a glimpse of her skipper, the way kids eagerly watch the moving truck for playmates when new neighbours move in.

We met her skipper, R, a few days later – in Prideau Haven. Conversations between sailors start in a different place than normal chats. Rather than talking about careers or kids we talked of where we’ve been and who we know in common. Then we moved on to boats: boat’s we’ve had, designs we admire, boat’s we’d like to sail and then, most importantly, we shared our dreams.

Dreams are fragile things, but speaking them out loud can give them power. The problem comes in choosing who to reveal them to. To say, I dream of seeing this particular and this particular harbor and I plan to get there under my own power, by my own hand and with my own skills- is a dream that’s easy to have but hard to make real. And to share such a dream with someone who doesn’t really understand can take away the magic it needs to thrive.

We met R a few more times. He was always smiling and always ready to share a story and his dreams – to visit Îles-de-la-Madeleine, to convert to the dark side on his next boat and get a fast Trimaran. We tossed around ideas and plans – I jokingly referred to him as our single legged, single-handing friend – in reference to his prosthetic leg. The last time we saw him was in Smuggler’s Cove - he looked tanned and happy and told us his plans to visit the before putting his boat to bed for the winter then trucking it east.

“Mayday this is the vessel E I’m taking on water and abandoning to my dingy.”
R’s voice was breathless, but unmistakably his. We listened as the Coast Guard asked his position and then plotted his latitude and longitude on the chart we had in front of us. We discovered we were once again crossing paths, but weren’t close enough to help.

We’d been in this position before, listening as fellow cruisers lost their boat. There’s a helplessness to it and the sick, morbid fascination of being voyeurs. But there’s more to it than that – there’s a vulnerability and a desire for answers. As the drama unfolded I felt a need to know how a boat could sink on a calm day in semi-sheltered waters – as though somehow by having that answer I could save myself from that fate. And there was the pain of knowing someone’s lovingly cultivated, painstakingly realized dream was sinking before his eyes.

We listened for achingly long minutes as vessels reported their progress as they sped to his position. Then we listened to his rescue unfold, the news he was safe. We heard that he told his rescuers that E had been holed by something he couldn’t identify and out of fear he could be trapped with only one good leg he had abandoned her without trying to repair the damage.

Then came the words that made the story lose shape. It seemed he was refusing to let the navy personal, who had fished him and his dingy out of the low grey swell, go aboard his boat and try and save it. He said there were three holes and it was unsafe. Then the police boat was on site, reporting that R was physically ok but agitated by the attempts to save his boat. As salvage pumps emptied the water out of the boat's hull, and brought her back from her plunge, the police reported they were, “looking at the criminal aspects.”

Dreams are fragile things. They can be buffeted and broken by personal storms you didn’t know were brewing. They can drift away. They can sink into low grey swell when help comes sooner than planned but later than when it's really needed.

We saw the boat towed into the dock a few hours later. When we went over we found R slowly unpacking the boat's sodden lockers, looking weary but unharmed. The boat was whole and floating, she had a few new scratches but nothing that resembled holes. We talked about how to dry out a half sunken boat and how save a drowned motor but we were careful not to ask how the boat had gone down and R was careful not to tell us that part of the story. He was subdued, his bright smile and easy laugh were absent, but in an off guard moment a dream slipped through. "E still has miles in her," he told us.
They’d carry on.

We absolutely LOVE following your adventures and this time we get daily updates - well, almost. Keep up the great writing.

Wow! Fascinating story. But more importantly, you put into words many of my feelings I have never been able to express. Dreams, the listening to a mayday... Thanks for articulating them!

We miss you.
Heather