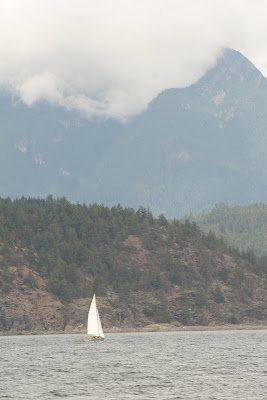 I always thought Desolation Sound was given a bum rap by Captain George Vancouver when he charted the area in 1792. Pretty much any cruising guide will tell you about its charms: zillions of islands, fjords and beaches nestled at the base of a snowcapped mountain backdrop, (dominated by 9,000 ft. Mt. Denman). But my guess is when Cpt Vancouver did his time, charting the rocky little bays that twist and turn with currents that don’t make sense and wind that comes from all directions at once, it was raining and blowing a gale.

In those conditions calling the place desolate is sort of a compliment. 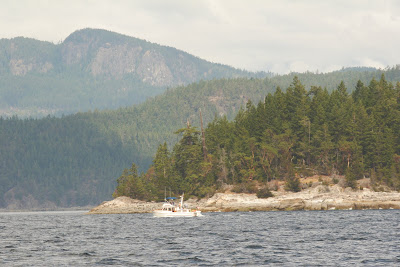 The good news for us is Cpt V did an awesome job charting the place – so as the wind kicked up and the skies opened we took cover in a peaceful cove where we cooked up a pasta dinner, baked a cake, invited a friend over from another boat then let Mother Nature do her thing.
This morning the air is crisp and clear. We kayaked into a tidal lagoon and played in the rapids and decided that Cpt V was a bit of a curmudgeon who probably just needed a vacation or something. Actually, we thought something else, but this is a family blog.