On our boat we use solar panels for generating 90% of the electricity we use aboard. When we are motoring the engine alternator provides a lot of power, but we are anchored a lot more than we are motoring.

We use a lot of electricity. The big consumers are the refrigeration system (especially when we are cooling many litres of water each day), the watermaker, and our main computer. So we have a lot of solar panels. Unlike most boats we don’t have a nice matched set – rather we have a 50 Watt panel from the old boat, 2 x 75 Watts that some nice friends donated to us, and a 85 W and a 90 W that were bought on Craigslist. Total power is 375 Watts which always seemed about enough (except in Southern California around Christmas time with lots of clouds and very short days).

Our friend Jim on Hotspur who has a similar amount of panels said that HE was getting as much as 25 Amps on sunny days. We were getting 15 A. (o.k. our 50 W panel is wired differently to the others and doesn’t show up on the ammeter, but still we should be getting more power). Out came the multimeter to determine if the panels were producing. All seemed to be producing their rated voltage. Hmmm. I threw a towel over the panels, one at a time. Di was inside checking the amperage. When we covered one panel, the amperage did not change. Clearly we had found the offending panel.

Our panels have individual wiring running to a common junction box, and then one large set of cables to the solar panel controller. I checked the wiring to the junction box but there was good continuity there. It was only when I wiggled the terminal strip inside the solar panel’s own junction box that the voltage dropped. The terminal strip was badly soldered to a circuit board. A little soldering and we were back in business. Another 2.5 Amps suddenly showed up on the ammeter.

We realized we have been operating with about 300 Watts of solar power the past year. What a bonus to gain that additional power! It’s going to be useful this summer as the refrigeration runs overtime in the very high heat (~35C during the day, 28C at night) we are experiencing. Overall we are very pleased with this amount of solar panels. We never have to run the engine to charge the batteries except around Christmas as I noted.

Technical note:
We use a Blue Sky Solar Boost 2000E controller. Works fine, but noisy on the SSB. We just open the breaker to the solar panels when we want to use the radio. The Nova Kool refrigerator controller and some cabin fans are also electrically noisy and have to be shut down when using the SSB. 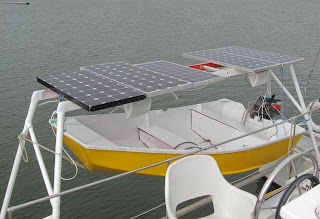 do you have any pictures of your deck with the solar panels installed? I'm going to be on a similar sized cat and am curious where you have them placed and how much room 350w of PV require.

we just added a few for you, Jeff.

Solar panels are great and are big help for people to conserve energy. Many of these and all you need to know about it is available online.

Home solar panels can either turn sunlight into electricity or hot water.