Flying Free from the Sea 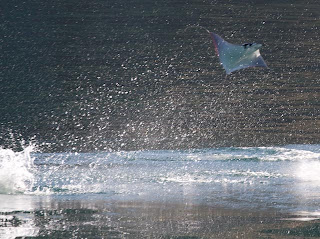 Smack! Without warning, a mobula emerges from below the water near our boat, its long flat body glistens in the sunrise. Flap, flap, maybe a somersault or two, and then smack! It happens all around us. Elegant flips. Comical belly flops. Choreographed group leaps. I see one mobula leap a few times in a row; while others leap only once and then disappear. Then the school moves away; wing tips at the surface, they fly on. 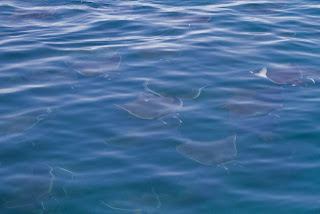 Both mantas and mobulas are members of the Family Mobulidae, a group of fish that we know very little about. I recently learned that we weren't the first to mistake mobulas for small mantas. Many people use the names interchangeably. With the locals, there is no distinction; any of the four species of mobulas in the Sea of Cortez (tarapacana, thurstoni, munkiana, and japanica) go by a single name: cubana or manta. 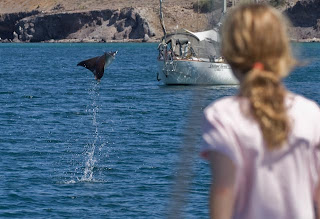 In this anchorage, today, we have hundreds around our boat. It sounds like gun fire as they leap and tumble. There is no shortage of explanations for why they jump. Some researchers think it is to dislodge parasites. Others think it might be a crazy way of keeping fit or simply playing. Others believe the sound of the slap immobilizes krill—which makes it easier for them to feed. Maia believes they just want to fly—just like she does. 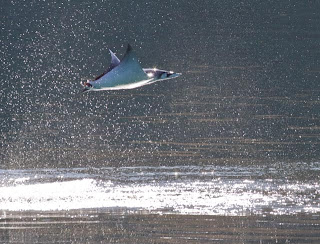 It is hard to imagine, but this fish, which we know so little about, is under pressure. As the food fishery in the sea continues to fail, local fishermen are turning to the cubana. The meat is said to be stringy and strong tasting. And it barely earns the fishermen enough to pay for gas. But when there is not much left to eat you catch what you can.


While we watch them leaping free from the sea it is hard not to feel shame. In John Steinbeck's memoir Log from the Sea of Cortez. Steinbeck wrote of a sea that was “ferocious with life.” “There was food everywhere. Everything ate everything else with a furious exuberance.” We are warned against anthropomorphizing the motives and emotions of the animals we encounter. But with creatures of the sea—which are so foreign and fantastical, it's hard not to imagine what they feel. Steinbeck called it “joyful survival”.
There are moments though when I encounter a reef, which should be thick with life, but it is nearly deserted that I long to see joyful survival. But then, the mobulas come. Few people have ever seen a school of rays glide by underwater. It's truly a thing of wonder, the salt water thick with strange and wonderful creatures as they fly past, living a life we barely understand. 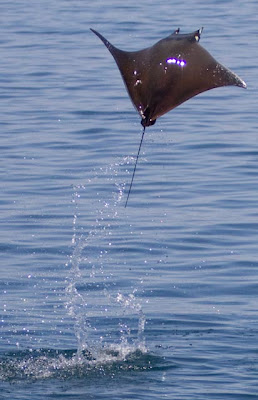 Once they go, I worry for them. They are easy prey for fishermen and there numbers are dwindling. But still they live with such exuberance. Explain those spectacular leaps however you will. To me it looks like joyful survival.

Whooooo! Awesome photos and fabulous info. I especially love the one with Maia in it. I agree, they just want to fly.

Fantastic photos and account of these creatures. I'd love to connect with you to feature a post with our readers about your family's unique experience. Please get in touch if you are interested.

Hi Anon,
Not sure who you are:) So it makes it tricky to get in touch with you.
cheers
diane (at) dianeselkirk.com