A month or so ago our friend Meri from Hotspur mentioned she had bought spare snake bite kits, just in case she encountered cruisers who didn’t have them. Evan and I were slightly surprised by the offer because, unlike Meri, we haven’t really run into many snakes here, actually any snakes... But as Meri shared tale, after tale of snake encounters and near misses, I listened and then bought one of her spare kits. 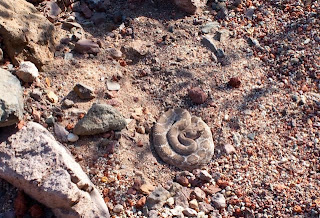 There’s something vaguely disconcerting about hiking in a region that has 15 different species of rattlesnakes, plus another 30, or so, other types of snakes of varying levels of deadliness (although some have cheerfully alliterative names like the Espiritu Santo Sandsnake or the Partida Norte Nightsnake so as not to worry you.) But if, like me, you come from a place that doesn’t have much in the way of poisonous snakes, it’s hard to know how afraid to be. 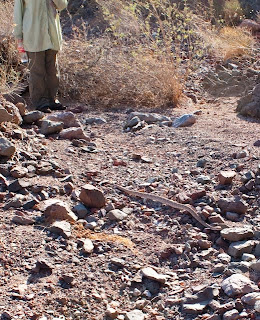 When I think of rattlesnakes, I think of old John Wayne movies: The lovely damsel riding through a peaceful arroyo, only to be struck down by a rattler the size of an anaconda. Not even their name helps dispell the image of death. The Baja California Rattlesnake (the most common species around here) is Crotalus enyo in Latin. Crotalus comes from the Greek crotalon, meaning a rattle or little bell. The name enyo refers to the Greek mother of war. So basically the snake is showing up for war, with bells on. And the Crotalus atrox, or Western Diamondback Rattlesnake, which is what our snake sort of looks like, ranks as one of the most dangerous snakes in the world (uhg)... 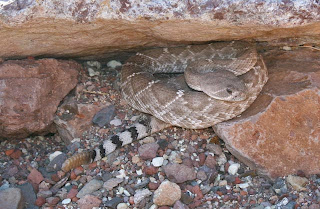 Like every scary animal that can kill us, rattlers have an image problem. They are easy to wipe out and several species are verging on extinction. But there are very few people who are interested in saving a snake.
I knew all of this, vaguely, when Meri, Lori (Third Day) and I went for a hike this morning. We decided to beat the sun and headed into a San Marcos arroyo for a pre-coffee hike. 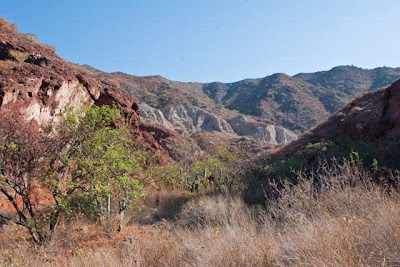 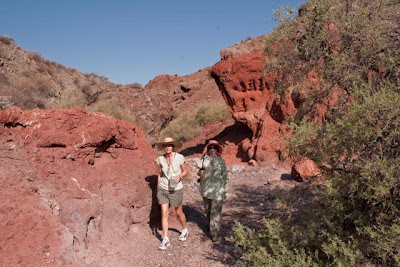 There was no trail. But we made our way into the island's interior, marveling at the changing geology and and the stunning vistas. On the return trip we saw it all in reverse, but were as fascinated as we were on the way in. We saw humming bird nests and more lizards than we could count. We admired the rugged, gnarled trees and watched the light play on the rich red rock. We were making a plan to bring our kids back to see it all, when I just missed stepping on a rattlesnake. 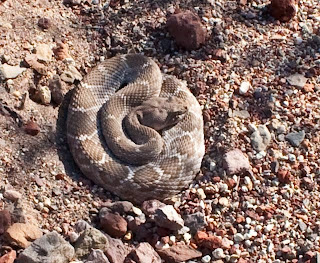 Lori saw it though, and screamed. Then she made her way past it. Then we all looked at the snake, which looked back at us and Meri tried to sort out how to get past it.
“Will it chase us?” I asked, as it began to uncoil itself. The answer, it turns out, is no. Rattlers are shy and non-aggressive (except for maybe good old C. atrox...). And it seemed our rattler had finished sunning himself and simply wanted to move to a shady spot. “You should be taking pictures!” Meri told me as I backed away. Her suggestion snapped me out of my moment of fear and I became fascinated by the beautiful creature. 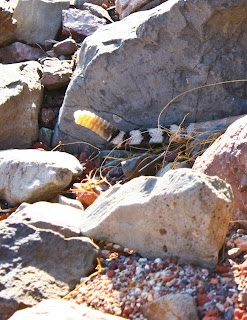 We watched him, for a while and discussed that this would have been a good time to be carrying our snake bite kits, and then we carried on.
Enriched.

I have been wondering all along about snakes in the Baja with all of the hiking you all do. Maybe my radar was on b/c Zach's newest love is watching Steve Irwin documentaries and he manages to find every snake under every rock everywhere he goes. Zach is begging lately for "snake handling classes"... still looking that up on the local homeschool lists ;)

After a bunch of search Meri has confirmed our snake: http://en.wikipedia.org/wiki/Crotalus_ruber