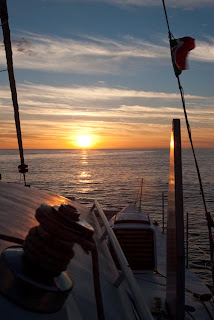 We headed out of Mazatlan's old harbour first thing Saturday morning. Our first goal was to find fuel. The weather report for our crossing was typical; either no wind, or light and in our face wind—so we wanted full tanks. Finding fuel in Mexico has become easier in the past 14-years. There are actual fuel docks now. Not all of them are staffed (and the one we were directed to in the old harbour didn't even seem to have fuel...) but heading into the marina zone to fuel up was still a much simpler option than arranging to jerry jug fuel by cab.
By noon we were underway. With just a low southerly swell running it was calm enough for Maia and I to make cookies—and take advantage of the cooling breeze that comes with motoring. At one point we noticed a couple of seabirds standing on the flat sea. As we motored closer we discovered they were hitch hiking on the backs of two turtles. Then the dolphins came—leaping and diving all around. As we ate dinner, watching the sun set into the calm sea, we thought that motor boat people might have something on us sailors. 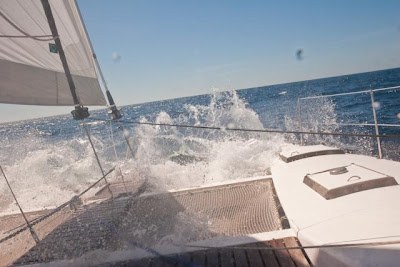 We've noticed that the waves arrive well before the wind in the Sea of Cortez. And as the night grew black we began to pitch and shudder with unseen wave slaps. But by midnight our sails were up. We left a luminescent wake as we sped along, hard on the wind. 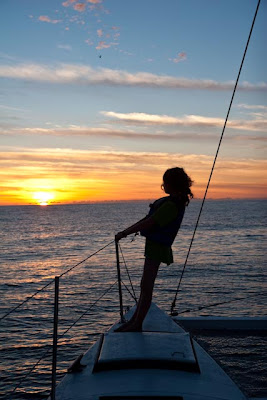 Our second day out always seems to pass in a fog. When the seas grow quieter one of us cooks a meal—these are always approximate in timing, we eat when the conditions and our hunger agree. Unless it's calm our meals tend to be heavy on the starch—lots of potatoes, rice and pasta.
While Ev and I both like being out, Maia seems to thrive on being at sea. She spends hours on the bow or in the nets, telling herself stories. She wanders around in a dreamy state, occasionally telling us how much she loves the ocean. She planned a ceremony (much like the one her friends will have when they cross the equator) to celebrate when we hit the halfway across point in our crossing--then she thanked Neptune for giving us permission to explore the oceans and have adventures. 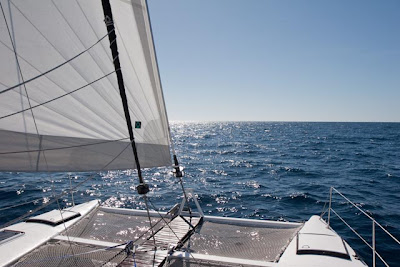 My midnight watch, on the second night, started in complete calm. The seas were flat, only our main was up, offering the lightest push to help the motor. Halfway through my first CBC DNTO podcast we started to pitch, the wind was still calm, but the seas became steeper and steeper. Unlike a monohull, which has just one surface that gets hit by a wave, multihulls have all sorts of places that can be slapped, shoved, smacked and slammed. In confused seas the ride tends to become jerky, and when going into the wind we hobby horse on the steepest peaks. More than the motion, it's the noise that tends to wear on me, it's like being in a drum; the drum of a rhythmically challenged three-year-old.
I woke Evan as the seas became steeper. There was both a reef and a boat of some sort not far ahead. We didn't have wind yet, but the size of the swell made us certain something strong, perhaps a Coromuel, was coming. We reefed the main and tried to sort out what the boat, which now lay directly in our path, was doing. The radar showed it stop, then start, then switch course, and then stop; all the while we drew closer together. We were on a collision course. We made a large and obvious course change and the mystery vessel followed. Was this a fishing boat trying to protect its nets? A vessel in need of assistance? A patrol boat? Something more sinister?
We called in Spanish, and then in English on the VHF radio. On our third call we got a response, “Ceilydh, this is the sailing vessel Lady Bug.” It turned out that they were trying to sort out what we were doing as well, and in both our efforts to avoid a collision (while dealing with sails and seas) we kept turning into each other's path. We'll go around your stern, we said. Soon their lights disappeared into the night as they continued north and we turned back into the west wind, which was now blowing to match the seas. As dawn slowly came, turning the Baja hills red, then golden, we took turns napping and continued to make our way upwind. 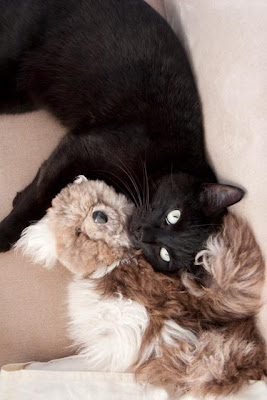 Charlie is not a half-bad boat cat, although he does get scared.
Soon we'll anchor. But first we need to find just the right cove.

More accurately, Charlie is not a half good cat.

Thanks for your comment on our blog- so good to read of Maia's love for the long passages. I can't wait to do one with our girls-

What a nice little crew you've got. We are thinking of getting a boat-cat as well.

Maia thinks one of these messages is from Sarah, who does not love Charlie the way she should:)
EJR-passagemaking with kids is pretty cool. All the friends we know who have done them talk about what great family time they are. After the fog passes;)
TWT-boat cats have their pros and cons, but we've found the amusement they offer (and the company on night watches) is worth the hassle of having them.