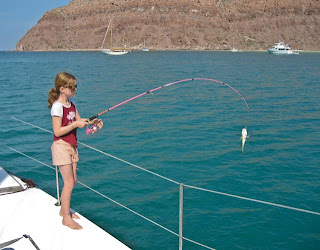 Maia caught her first fish this morning. She's been a part of catching other fish, but this was the first time she cast with her new pink rod, wound in the light-up reel and ended up with a fish on deck. The problem, once she pulled the little striped bass aboard and looked into its little pleading eyes, was she had no desire to kill and eat her fish—so she released it back into the water. Then went back to casting, without a lure.
We do like fresh fish though. And despite trolling with a meat hook during the past two days of travel we've come up empty. There is something not right about being fishless in place like this—where the clear blue water advertises schools of fish that are being caught by everything from pelicans to sea lions (just not us). 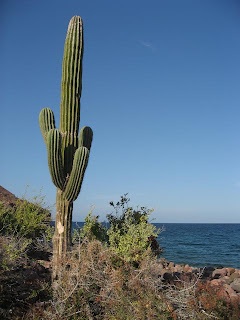 We're in an anchorage called Caleta Partida, about 20 miles from La Paz. The protected bay was created when an ancient volcanic explosion divided the one island into two. Before the afternoon winds came up we decided to take the dingy through the shallow channel between the islands to the rugged and exposed outside to visit some sea caves. On our way there we noticed the fish camp had someone in it, someone who (given the enthusiasm of his wave) seemed friendly .

While catching our own fish holds a certain type of appeal, Evan and I both take after Maia when it comes to buckling down and doing the deed required to turn cute swimming fish into filets. So when we have the chance to buy pre-killed, pre-cleaned and pre-fileted fish we'll mumble something about supporting the local economy, or having a cultural experience and get our fish the wimpy way... 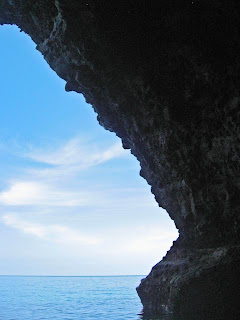 After our sightseeing trip, where we debated the colour of the cliffs (which range from ocher, to lilac to salmon (or pink, purple and yellowy-orange) we went ashore and introduced ourselves to Arnoldada or Arnafa or something Arnie-sh (despite getting him to repeat his name several times we still weren't sure...) The fisherman offered us a roosterfish, but didn't want money for it, he wanted to trade and said he needed sunglasses. We have loads of sunglasses aboard. We find them, we buy them, they get forgotten by guests... So Ev headed back to the boat to get a few pairs for him to choose between and while Don and Maia built sandcastles, Alison and I chatted with Arnie. 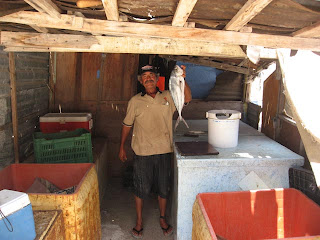 My Spanish sucks. Arnie said his Spanish is pretty good, but his English in non existent. So while I don't do tenses and when I get stuck I throw in random French words, the conversation was in Spanish. Which meant it went something like this:
A: Something, something over there, something cave, something pictures.
Me: There is a cave over there with pictures? Can we walk there, can we enter the cave? (at least this is what I think I said)
A: Yes. Something, something, something walk, near something, over something something cliff. Beautiful pictures. First cave no, second cave yes.
Me: So if we go in the second cave, which is over there near a cliff, we'll see cave pictures? Or we should take pictures?
I also learned that the next two days may, or may not be windy or may be very windy, or only windy at night. And that it's easier to catch fish at either a high tide or when your battery is charged—not sure. And he has seven children, between two families the youngest is a new born (this I'm certain of). And his goes to the fish camp five weeks on and three weeks off and his family joins him during holidays. And he likes it when the yachtes visit him, but most just wave and keep going.
As far as the cave goes—that adventure is still to come. We had fish that needed to get back to the boat and be made into delicious tacos.
On the way back to the boat I saw yet another pelican catch yet another fish, and this time rather than feeling jealous I felt smug. My fish not only had been deboned it had come with a story—a good story, even if I didn't understand all the words.
----------
radio email processed by SailMail
for information see: http://www.sailmail.com