It was our old friend Stewart who spotted the sea turtle: A green lump, drifting asleep on the ocean’s currents. The girls all rushed to the side of the boat to watch it as we sailed past. Maia was awed. “Maybe it’s the one I released,” she whispered. 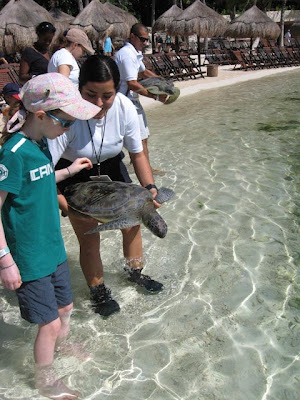 The idea that this turtle was the same one she set free from the Yucatan last year is improbable. But as we say goodbye to friends who are sailing off to the South Pacific, to their Land of Beyond, I want her to believe in the improbable.

One of the first things we taught Maia about goodbye was, if it really matters to you, goodbye will somehow, someway be followed by hello. “The world is round and that means we’ll meet again,” is a phrase that was given to me when my tears came at a long ago goodbye. So it’s a phrase I’ve passed on to Maia, to help her through the hardest moments in cruising. 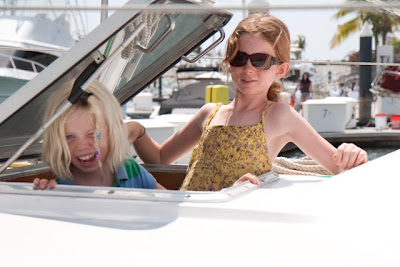 She holds those words tight. And amazingly this week (one of huge and heartbreaking goodbyes as Maia, Mairen and Siobhan go different ways) has been the week where the phrase came to life, and our round world brought us old friends from unexpected places. 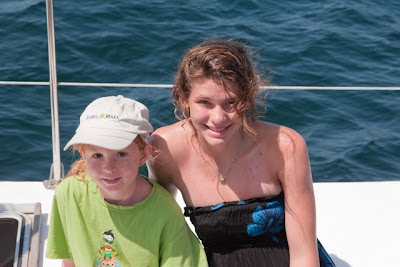 Coral was born when we were all sailing in Mexico last time. Her parents were two of our favourite people, always ready to offer help, or a laugh. They’ve stayed in our lives through the years, drifting in and out unexpectedly. And if by magic, Coral and her dad, Stewart (and his lovely new family) turned out to be holidaying in Mexico this week.

So we went sailing, and during that sail we told Stewart about another, even more improbable connection. We met a nice couple, Karl and Andrea (and their two boys), at the marina. We discovered that they too had cruised before the kids came along—a few years before us in fact. They were on a Westsail 28, they said. We knew people on a Westsail 28, I responded: Todd and Steph on Mangoe. We loved them, I explained, but lost track of them after they had their first babies in New Zealand and we moved back to Canada.

It turns out Karl and Andrea had sold their old boat to Todd and Steph, and Andrea said they are still in contact with them. So now, we are too. Which is how we learned from Steph that they are still in New Zealand and have four kids now. “The last one- you'll never believe- named Ceilyh ( no D- just too much.)" she wrote, "Cuz we've always loved that name and of course there are great memories associated with it.” (Our last boat, a Fortune 30, was also called Ceilydh--so there is a baby named after our boat!!) 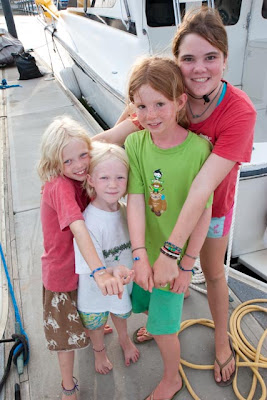 And this morning, on the day we’ll say a few more big goodbyes, another friend arrived. This one doesn’t go back as far, but for Maia, she may be most significant of all. Amy, from Third Day is here.

There was a moment, when the turtle drifted past us, while old stories were being exchanged, when Maia began to believe that the currents that carry nomads apart can also bring us back together. And she made a pact with that turtle, to keep an eye out for him on the ocean, and to say hello again someday in the future. “The world is round,” she told him as he drifted out of sight.