An hour or so out of the actuator arm of our auto pilot stopped working. After cursing it a bit, we put a spare on and sailed on toward . Autopilots are one of the more important pieces of equipment onboard— and as romantic as hand steering seems—no one does it. Monohulls use windvanes for long distance sailing but multihulls (which can’t use windvanes) are stuck with finicky pieces of electronics, built by crap-ass companies, which have a tendency to get uppity about everything from being near salt water to the running of a single side band radio.

Despite the temperamentalness of the things—we love ours.
All four of them.
Just because we love them doesn’t mean we trust them...

Our newest (and favourite) autopilot is the one that broke (unlike children it’s perfectly okay to favour one piece of electronics over another). So when my parents visited we sent the actuator home (it had salt water corrosion) with them for warranty repair.
They, being the type who pack light, stuck the arm in their carry-on luggage and went on their merry way.
Until they hit security.
The actuator may look like a boat part to us, but to the TSA it is a bludgeon. And the old folks, who look like typical tourists to my eyes, were clearly terrorists. 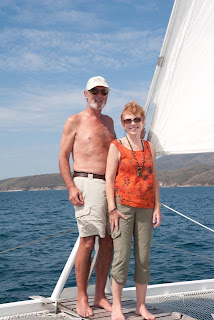 terrorists
Terrorists with bludgeons are not treated well by the TSA. So after being thoroughly searched, having their luggage shredded (they had to tape it back together), and barely making their flight, they thought it was important that we mention to people that boat parts really belong in checked luggage.
Who knows what the TSA would make of watermaker filters or VHF radios…

Evan,
I walked through security a couple of month ago with a large potable water pressure pump and two bags of toilet chemicals (white powder)It took some explaining but in the end they did let me carry it on.I do of course look less like a terrorist then your parents. I am flying down in a week with a bunch more parts and will definitely check all these weapons. I hope to see you in La Cruz