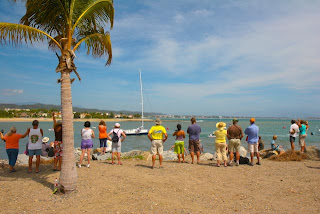 Not to judge anyone or anything, but we have one of the MEXORC boats to thank for a really great afternoon of entertainment on a day when we were all saddened by the devastation in Chile.

Our part of the Tsunami arrived in Banderas Bay (Puerto Vallarta, Mexico) right on schedule; about midday. We didn’t get the big waves the kids were worried about, instead we had a gradual decrease in water depth coupled with a series of low surges that would flood into the marina (and bay) at 5+  knots for 10 minutes and then reverse direction and rush out again at the same speed. 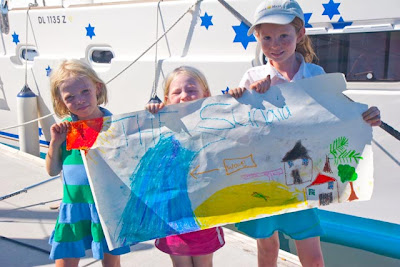 The kids get a tsumani lesson from Totem -- with a bonus
We watched our neighbour boat head out during one of the surges and nearly get swept onto the rocks by the current. After that, we assumed most boats would stay put--we were expecting the waves to pass in 2-3 hours. But one of the Mexorc boats decided to head out anyway—with the races set to start tomorrow we guess they wanted to practice. 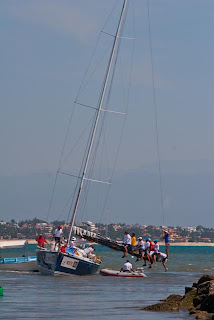 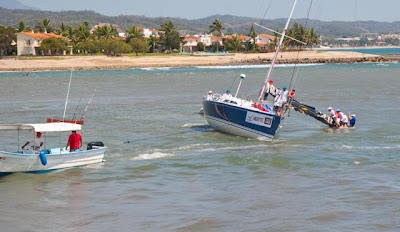 We have particularly low water right now because the tsunami surge happened to coincide with low tide. And the marina entry has limited water at the best of times, so when the boat (which probably has a 12’ deep keel) headed out, no one was surprised that they got stuck. 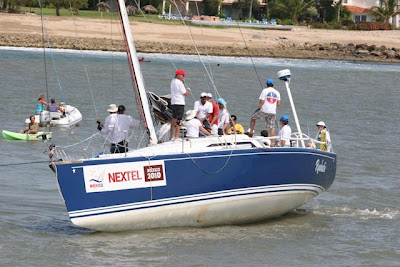 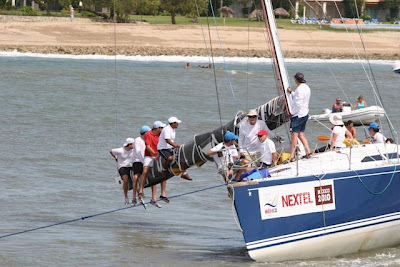 What we were surprised by was the fact that after they were freed, and came back in, they decided to try again. This time they got REALLY stuck. 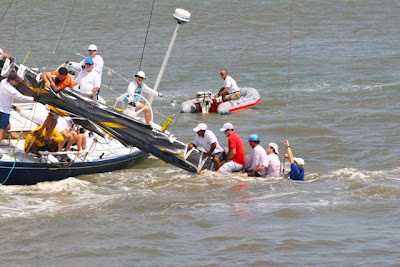 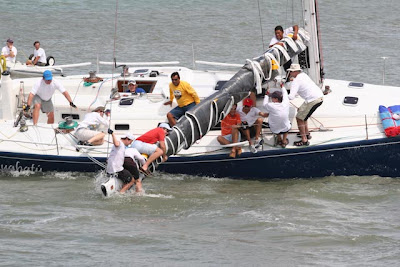 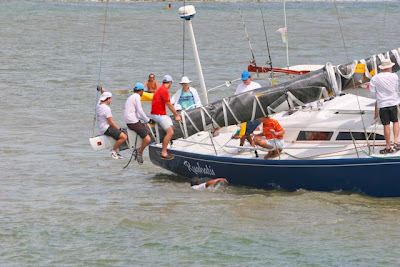 Watching from shore we were able to critique the many things the crew did wrong and the many ways they could do better. It was pretty scary watching some of the manoeuvres (tow lines have been known to snap and we were worried for the bow man) and the boom (which was filled with people in an effort to heel the boat over) would hurl from side to side when the boat switched positions. And note the MOB, no one aboard seemed to notice him, but we did. The current changing directions every ten minutes was the biggest problem, it caused the boat to spin around and heel over unexpectedly and tended to work against the tow boat and inopportune moments. 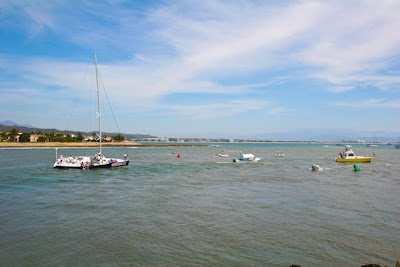 After an hour or so the boat was towed off the bottom by two boats in tandem. Excitement over--for now. Unfortunately no one is quite certain when we'll get our water back and several boats are waiting in the bay hoping to get into the marina.

Email ThisBlogThis!Share to TwitterShare to FacebookShare to Pinterest
Labels: aground, mexico, Mexorc, tsunami

Wow Di, Evan and Maia you guys have had some crazy adventures. I am saddened at the devastation the earthquake has caused but am glad you guys are out of harms way.

I love that two of us can report on the same event http://sv-totem.blogspot.com/2010/02/tsunami-report-la-cruz-entertained-by.html from different perspectives.