It was the sounds of Mexico I may have missed the most in the years we were away. Those boisterously urgent radio voices that give way to songs, which seem to drift aimlessly and indistinguishably one into the next. Unlike most spoken Spanish, I seem to understand words when they’re sung—but that may be because there are only a handful of themes in Mexican music and broken hearts only require so much vocabulary to describe them. 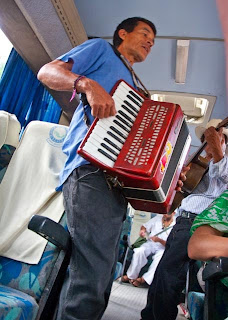 I thought I would crave Latin music when I left last time. So I bought a few CDs. The only time I played them was when Maia was a baby. For reasons known only to her she went through a stage where nothing but Ricky Martin, rocking out in Spanish, would make her smile. Good old Canadian singer songwriters made her howl, soothing new age music, like Enya, made her screech. So I played Ricky’s Spanish album, on endless repeat until she got over it. Then I thought about throwing it away.

Other than for that short time and the odd Mexican dinner, the music never seemed to fit. Perhaps it needs the heat and languid pace of Mexico to sound right. 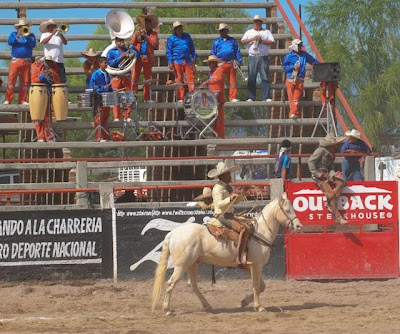 But now we’re back in Jalisco, the birthplace of Mariachi, a music style that’s often mocked but that I learned to love around the same time I really started really liking tequila. Evan’s pretty sure there was some overlap between the two events, that while I was painstakingly researching whether I preferred the smoothness of a reposado over the edge of anejo there was an unrelenting guitarrón and vihuela strumming seductively in the background—hypnotizing me into thinking musicians dressed in embroidered charro outfits and sombreros were the hippest thing in music.
I like to think I just got in touch with my inner Latina. 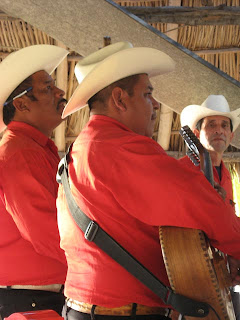 The good news is we’re in a place where we hear music everywhere, everyone sings. For a few dollars we can buy a song or two while we sip our margaritas on the beach and I can close my eyes and sob to Cielito Lindo. Then, when we bus home, the buskers come out and stroll the aisle. Where the buskers let off, the radio leaks in from buildings and cars, filling the air with a throbbing tempo. 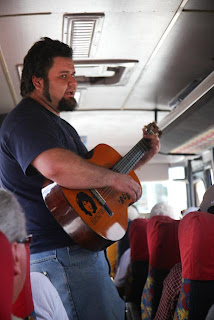 The bad news is we hear music everywhere, everyone sings. Especially on the bus. There is a particularly enthusiastic father-son duo who we’ve seen (and heard) more than we’d like. The boy's uniquely high-pitched-nails-on-black-board version of Cielito Lindo is enough to make me close my eyes and sob. But they only ever play the same two songs, ask for a tip and move on. And luckily, so far they haven't played my other favourite: ¡Ay Jalisco, No Te Rajes!

I think about not tipping the father and son when they board our bus and play. I see other people mulling the same thought as the windows rattle painfully with the boy's heartfelt Ay, ay, ay, ay’s
But then the song continues, to a nearly bearable:

sing and don't cry,
heavenly one, for singing
gladdens the heart.

I imagine the boy’s shrill voice will break someday.
And so I tip him, hoping to keep his gladdened heart intact.

I like mariachi, too. Still trying to like tequila - I'm picky. There is nothing like a fresh margarita in Mexico though - not the sour mix ones, yuck. Enjoy the tunes! What a wonderful cultural experience for M.

You inner latina? I haven't had a laugh that good in a LONG time!
:)
I remember a certain pair of Canadians trying to salsa dance a few times. Ahem.
Yes, I too LOVE mariachi bands. I told Doug I want a big, flashy mariachi band t serenade my on my 40th birthday.