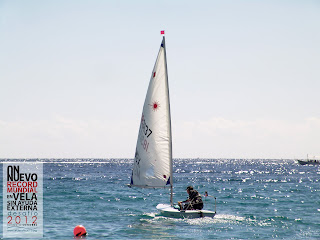 The girls just came roaring back to the boat looking for supplies to get autographs with—the reason? 17-year-old Tania Elías Calles, had just sailed into the harbour in her laser from Cabo San Lucas, completing the 300 nautical mile sail in a boat that’s only 14ft long. Tania is trying to raise funds so she can sail for during the 2012 London Olympics and her crossing of the Sea of Cortez set a Guinness World Record.
As a sailor, I’m pretty thrilled that Maia and her friends have access to a role model who’s fulfilling her dreams in such a focused way. Tania is not only trying to raise money for her own sailing goals but she’s also supporting Foundation Gana MX, which addresses childhood obesity in .
As a mother though, the idea of my own daughter setting off on a 48-hr-sail across water that can be, well, nasty, kind of scares the heck out of me. I remember how invincible I felt at 17. I also recall how that feeling of supreme smartness and immortality caused me to make some really bad decisions in the pursuit of stuff that seemed like a good idea at the time.
I feel the same way about Abby and Jessica Watson both are 16-year-old girls striving to be the youngest women to sail around the world. There is part of me that cheers for them—they both seem to be level headed, capable girls. And Maia and I both *love* one of Jessica's reasons for sailing around the world:

“For almost 6 years my family lived on our motor boat traveling and based at different marinas on the east coast of Australia. When you live on the water, it's sort of like an unwritten law that when another boat is pulling in, you stop to give a hand and take their lines.”

“But being a 'little girl' meant that more often than not, my offer of help would be completely ignored, while the line was passed to the fully grown man next to me.”

“I found this incredibly frustrating as I knew that I was just as capable of handling the lines as anyone else. I hated being judged by my appearance and other people's expectations of what a 'little girl' was capable of.”

“I hope that part of what I'm doing out here is proving that we shouldn't judge by appearance and our own expectations. I want the world to know exactly what 'little girls' and young people are actually capable of!”

But 16 *is* really young and the world is really big. I also wonder how far we can push these records down. Clearly one country decided 14 was too young, and the Dutch courts barred 14-year-old Laura Dekker from her plan to compete for the ‘youngest’ title.
I guess I wonder where personal goals and societal pressure collide. We’re so focused on higher, faster, further, younger--that the quest for a title might get in the way of good judgment.
That said, in a world where so many things get in the way of a happy and healthy adolescence, I’ll probably keep cheering for girls who are doing their best and reaching for their dreams. And if Maia decides to reach further than I’m comfortable with, my guess is I’ll bite back my fears and help her get there.

Very well put! And I so know what you mean.

My little sailor is less than a year old, but I wonder about the same thing. It seems kind of a catch 22 of raising a confident, talented and and skilled young women. It is both what every parent wants and fears the most.