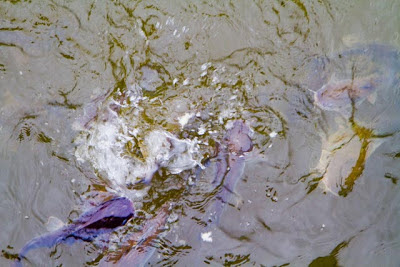 Shortly after arriving in the Brisbane River we noticed the occasional loud thump against our hull. For the first few months we assumed we’d been hit by a wave slap or maybe a bit of debris, but eventually we realized the thumps were fishier than that (sorry couldn’t resist…)

Our river is known for the thousand plus bull sharks that swim and feed here. They are born at the mouth of the river then the pups swim upstream where they grow up to 3m. Most of the sharks in our part of the river ‘only’ get to about 1.5m, a size that’s not considered dangerous to people (though world-wide bull sharks are blamed for more fatalities than any other species) but can be hazardous to small dogs (and the occasional race horse).

But being a shark lover I found the idea of sharks outside our boat more fascinating than frightening. And I was eager to get a glimpse of this cosmopolitan creature that can live in fresh or salt water and that seemed to be bashing our boat with increasing frequency and enthusiasm.

Bull sharks are pretty mysterious (they are known to jump out of the water and spin like dolphins for no clear reason) but one behaviour: the bump and bite, is pretty well-known. This is when the near-blind shark head-butts their prey before sinking their teeth into it, this lets the shark figure out what its about to bite.

This is what we assumed was happening—for some reason our boat appealed to sharks, so they’d bump us, realize we weren’t really food, then move on. Only to decide to try again a few minutes later. Then the behaviour changed. Every time we filled the sink to do dishes the bumps became concentrated right around the drain. We’d get a ‘bump, bump, bump’ and the plug would pop out and our fresh water (with yummy food debris would drain away).

We tried to convince ourselves we were imagining it—maybe the plug fit poorly, or something. So I read up on the sharks some more. When in the ocean they eat fish, stingrays, dolphins, sea turtles, other sharks, molluscs and crustaceans. In rivers they have a more varied diet that includes fish, crab, shrimp, squid, sea urchins, turtles, birds, bats, dogs, rats, cows and antelope (apparently). I couldn’t find a single reference for bull sharks liking dish washing debris.

So we pondered and we held in the plug with one hand while we washed quickly. Occasionally after having the plug bumped free I’d rush outside to see if I could glimpse our ‘shark’. I’d see splashes, a flash of silver but nothing conclusive until one day when we threw mouldy bread over the side.

The water erupted. But not with the shark I had expected, instead there were dozens of catfish. 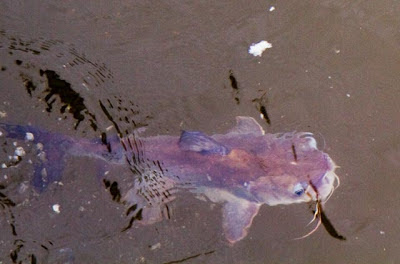 It seems we have a permanent school under the boat now—they make dishwashing interesting. But we kind of find them endearing.

Email ThisBlogThis!Share to TwitterShare to FacebookShare to Pinterest
Labels: Australia, Life aboard, wildlife

Glad you're fond of your catfish. We, on the other hand, are not at all fond of our carp. They bang on the side of the hull to loosen the growth so they can then chew on it. Bang...grind...bang..grind. Here is a video so you can hear that you are not alone on this.

Oh, Deb!! I think you solved our mystery. I do hear banging in other places and a crunching noise. Same behaviour I'll bet.

You just taught every Cajun in Louisiana a new way to fish for a local delicacy, catfish. LOL

Dang, you sure know how to spin a tall shark story!!!

Next they need names. I know Maia can find a couple of identifying marks and tag appropriate names. Deb, I'm slightly disturbed by the "bang...grind" routine! OH and now it's time for a pedicure party. People pay big money to have catfish nibble dead skin off their toes! Hey now that we finally have The Internets again I can see the pretty blog updates. Nice!!