The Cricket, more adventures Down Under 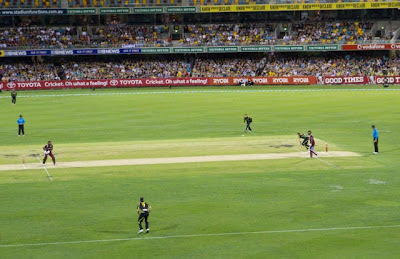 'Why is it THE cricket?’ I asked, as a group of us sat around a table eating prawns, drinking wine and enjoying the dinner that came with our VIP cricket tickets. “Don’t you go to THE cinema? It’s just a definite article,” I was told. (Which made sense.) “Just like going to the tennis or the hockey.” (Mmm, not so much.)

The cricket is like that for me. It almost makes sense: You have a bowler trying to throw a ball at a wicket and a batter trying to hit the ball so it can’t hit the wicket. Good so far.

‘Wait! Are there are two batters running?!’ I was slowly putting it together: An over is six balls. We were at a 20 Over game which meant it would be over in about three hours (or four if you add in dinner and supper breaks) versus a test match which takes five days (six hours a day with tea breaks, and maybe naps). “Test matches,” I was told, “are wonderful. Like watching a waterfall.” 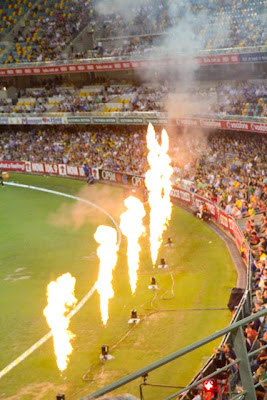 But while I had sorted out the overs and the innings, and took great delight every time a batter got a six (ooh!! Pretty fire explosions and loud music) it took me thirty minutes into my first ever match (thirty minutes!) for me to realize two batters were running at the same time.
It took me even longer to realize that when a batter hit the ball out of the ballpark (cricket pitch?) and into the stands (scoring a six—as in six runs. Fire!! Ooh, pretty.), the guy who caught it didn’t keep it, have it autographed and then later sell it on Gumtree—no, he gave it back. “They only get one ball,” my interpreter, the ever-cheerful eight-year old Alex, explained. Apparently even if the ball breaks they need to sift through a box of other used balls and find one there. A very economical sport this. 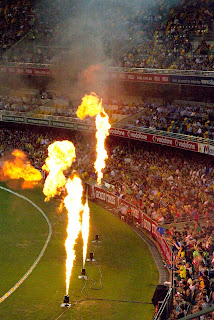 ‘Hey! Why’d we get the fire?’ No one hit a six, but it turns out you also get fire, loud music and cricket dancers (sort of like cheerleaders who have no skills) when someone goes out. And someone can go out, or be dismissed, for one of five reasons (wikipedia says 10, but my interpreters were an eight year old and a co-worker of Ev’s who had an open bar at his disposal, so we’ll accept five). 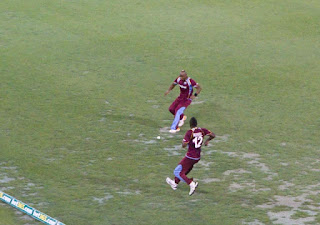 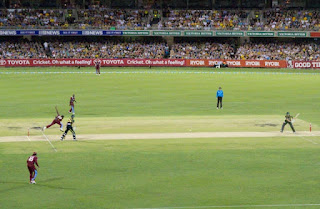 And so went the game. Until the near the end—when using relatively simple maths Evan and I realized there was no way for Australia to catch up. But all around us the crowd kept cheering and urging them on. So we asked about that. “Oh, sure they still have a chance!” We did the math—1.5 overs left = 9 balls or a maximum of 54 runs. Oz needed 51. “Oh, so not so good then… But they could get extras!”

‘Are extras common?’ I asked, as two more batters were dismissed and the West Indies win seemed sealed (as evidenced by one of the fielders doing yoga stretches). “No, not really,” I was told. 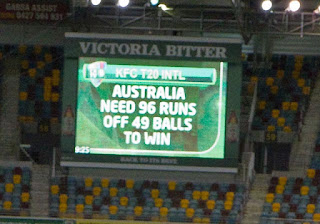 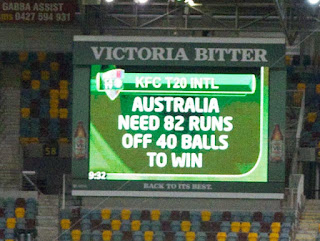 ‘By the way,’ I asked, ‘which countries make up the West Indies team?’ My question got a puzzled look. Not the cheerfully bemused look I got when I asked dumb game questions like ‘why do they keep switching sides?’ (They do it at the end of each over, or after some one is dismissed, unless it’s the last ball of the over—or something like that). The West Indies, I was told, are just that, “The country of West Indie.”
There is no country of ‘West Indie’, I said.
“Are you sure?” I was asked. By a few people.

You are right, there's no country called 'West Indies'. Wikipedia lists the individual countries from which players are drawn for the West Indies cricket team.