Message in a Bottle

“Mum, Dad… Do you want some wine?”
Wine is something I rarely say no to, unless I’m on a passage—which, incidentally, is exactly when Maia encourages us to drink. It’s not that she’s looking for more mellow parents (I hope) it’s because she loves sending out messages in bottles. Because for someone who’s sent out maybe a dozen bottles since we started sailing almost three years ago—she’s had a remarkable track record of responses.

The recent news that another of Maia’s bottles had been found in the middle of the Coral Sea—on Huon Reef, a month after she tossed it in at Chesterfield Reef, some 284 nautical miles distant, made me wonder about the history and enduring romance of a message in a bottle. Because—as mail goes—it’s about as reliable as Correos de Mexico. Though it is free—which makes it a slightly better bet.

It turns out messages have been sent out in bottles for a very long time (to varying degrees of success). The earliest recorded sender is said to have been the Greek philosopher Theophrastus who, somewhere around 310 BC, threw bottles into the Med with the hope of proving it the water flowed into the Atlantic—it’s not clear if he heard back. Then in the 16th century Queen Elizabeth I was apparently so inundated with bottles coming from the British Fleet she appointed an official “Uncorker of Ocean Bottles”—a gig which I believe has since been discontinued.

My favourite stories of messages in bottles are from more recent times. There is the poignant (if unproven) story of a passenger aboard the torpedoed Lusitania, who wrote a message in a bottle and set it adrift just moments before sinking. It’s said to have read: “Still on deck with a few people. The last boats have left. We are sinking fast. Some men near me are praying with a priest. The end is near…” While another famous shipwreck had this message: "From Titanic, goodbye all, Burke of Glanmire, Cork” The bottle, set adrift by 19-year-old Jeremiah Burke, floated in the currents for almost a year before it washed up only a few miles from his family's house.

There are happy stories carried by bottles as well—including the story of bored young Swedish sailor who dropped a bottle overboard with a message asking any pretty girl who found it to write. Apparently a pretty girl did—and Paolina and Ake Viking were married in Sicily in the autumn of 1958. And every year or two there is a news story of a school-child’s fragile glass bottle making an improbable voyage to a faraway place and someone finding it—and sending back a message. 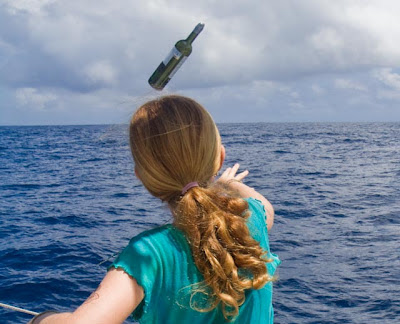 And so—in the interest of childhood dreams and wondrous outcomes we drink our wine. Then Maia writes her messages and seals them carefully and tosses them overboard and imagines the miles her bottles will float and the stories they may carry back to her.

I agree Katy. Evan and I found a bottle years ago whilst kayaking--they are as much fun to find (maybe even more fun to find) as they are to send out into the world.

I remember reading an account of a message in a bottle that was uncovered on a beach after a storm. Inside was the last will and testament of a Spaniard who had been shipwrecked. He wrote his will on the fragment of a shirt in his own blood. He had carefully divided his asssets and estates amongst his family members. As I recall, the letter and will were turned over to the Spanish consulate, but they were unable to execute the terms of the will. It turned out that the message was more than four hundred years old!