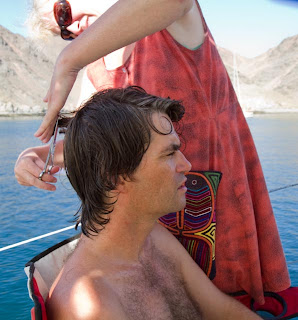 My last hair cut was under a palapa not far from the beach. A cow-head skeleton looked down from one of the support poles as my split ends were sheered off. Whenever the wind blew my cut risked becoming uneven. The fact my hairdresser was drinking beer while she trimmed didn’t really increase my confidence.

Afterward I surreptitiously met with another cruiser in a washroom outside a restaurant in order to repair the ‘Aging Malibu Barbie Blond’ colour that my hair takes on after a few months in the sun. I didn’t want to risk running the chemicals down our boat’s drains, because who knows what that would do to the fish.

Mexico doesn’t have hair dye for hair my colour, but before we left I found a bunch of dye that looked roughly my shade on sale for $2.50 a box. I stocked up. When we finished rinsing my hair in the bathroom sink we agreed it was probably just the dim lighting that gave my hair a green cast.

But for better or worse I was beautified and ready to head north for work.

Cruisers aren’t known for their beauty routines. It’s pretty typical for men to sport scraggy ponytails while women favour salt and pepper buzz cuts. The goal is low maintenance. But if you’re not ready to embrace the minimalist look—or occasionally need to be seen in circles outside the flip-flop set, you need to figure out a way to stay groomed.

We had a big haircutting day on our boat a few weeks ago and both Evan and Maia offered to return the favour and give me a trim. But I’ve seen Maia’s work with scissors and I know how the one cut Evan gave me turned out. So I declined their kind offer and stuck my hair back under a hat. The problem though is in exactly 10-days I have to go north and impress people enough that they’ll keep giving me work. And as much as I think I should be hired based on my way with words (spelling and grammar errors be dammed) appearance still plays a role. 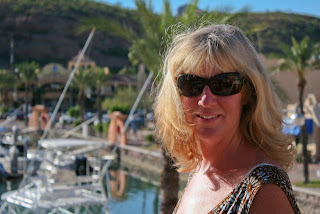 Fortunately we’re in a city. And Mexican women love their hair salons. Unfortunately my Spanish still sucks. I can order beer fine but I haven’t a clue how to describe how I’d like my hair cut. Which means when I went to the beauty salon to be beautified I was at the mercy of my hairdresser. Which, when you think about it, is the same in any language. Afterward, when the deed was done, Maia pronounced me ‘fluffy’ and informed me she liked my hair better before I had it cut.

“You mean when it was under my hat?” I asked. She nodded yes…

Email ThisBlogThis!Share to TwitterShare to FacebookShare to Pinterest
Labels: Life aboard, women and cruising, writing