Aground in a Desert 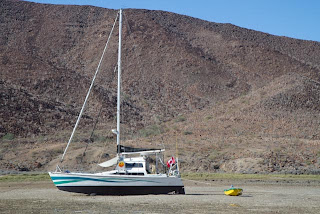 This is a bit out of order--but I haven't been able to load pictures for a bit and this post needed pictures... 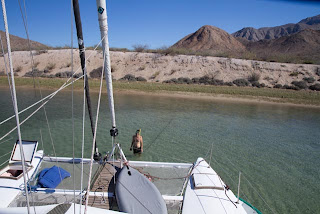 There is something endlessly cool about being able to drive our boat up onto a beach. It’s such a fun feature that rather than just putting up with the lousy bottom job we got in , we decided to remedy it. 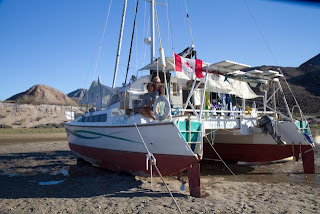 Puerto Don Juan has a beach which is simply known as the careening beach. The name goes back to the earliest guide book I’ve found on the area, so my guess the beach, and its use, is a historical one. 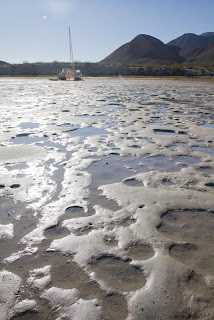 These days it’s pretty much only the catamarans that careen. But back in the days before travel lifts monohulls used to do the same, painting one side of the hull on one tide and the other side on the next. (We do much the same—except it’s one hull per tide) 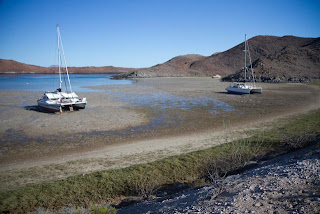 The concern with careening right on the beach is an environmental one. Despite our best efforts it’s hard to ensure nothing toxic makes it into the sand. 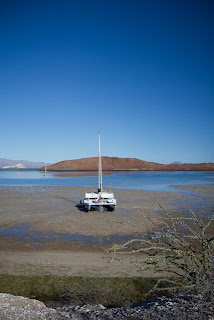 But the fun—of walking around your boat and seeing it from every angle, almost makes up for the effort. And if that doesn’t make you feel good, the lack of a $1000 haul out bill definitely does.

Email ThisBlogThis!Share to TwitterShare to FacebookShare to Pinterest
Labels: aground, maintenance

Not having to pay the haul out bill makes it ever so beautiful. When we lived offshore Key West, we'd take the 14' fiberglass runabout to the sandbar up the coast a bit run it aground and enjoy waiting for the tide to life us off again many hours later. Meanwhile toying with the crabs, floating on the windsurfer board, playing scrabble in the warm water on a short table..... ahh, I remember it well.