It’s hard for me to let go of a story. Our friend Monica on S/V Savannah commented on this. She said when I find something I’m curious about I research it until I have the answers. But when she finds something she’s curious about she says, ‘interesting,’ and then kicks back and relaxes.

I’m sure she’s exaggerating, but I do get a bit obsessive, which is how we found ourselves at Perlas del Mar de Cortez talking to one of the owners and founders, Douglas McLaurin about black pearls in the Sea of Cortez. You may recall the story about the pearls Meri and I found in Santa Rosalia. Well, we dispatched with that mystery rather easily: A quick look under a long wave ultraviolet light proved they weren’t Cortez Pearls (Sea of Cortez pearls contain porphyrins which make them glow), a few other simple checks and it was confirmed--we own freshwater pearls from China, dyed using dubious methods and sold around the world…

The good news is McLaurin broke this bad news in the middle of a showroom that contains some of the most beautiful gems I’ve ever seen. And as he told us story of how the pearl showroom came to be, it was almost hard to concentrate on his words (I think I'm part magpie...).

The story of Cortez Pearls almost sounds like a fairytale. In the 1990's Mclaurin and his partners Enrique Arizmendi and Manuel Nava Romo were graduate aquaculture students at Tec de Monterrey. They were instructed to create an aquaculture business that could be developed in a real life setting. Because their business would be on paper only—they decided to dream big: They would revive the mythical Sea of Cortez Pearl industry using a near-extinct native species and modern culturing methods.
The three students received a C- on their paper. They were told the species they wanted to grow, the Pteria Sterna had never been successfully cultivated, saltwater cultivation had never occurred successfully in North America and their business would fail.

The students decided that the only way they could respond to their poor grade was to prove their teachers wrong. With no resources and only a limited idea of what they were doing they began a research project—which to everyone’s shock yielded pearls.

The three continued to farm: learning by trial and error, one year loosing 90% of the farm to a hurricane.
The thing that struck me most (when I could take my eyes of the pearls) is the commitment the three men have to creating an ethical business--the pearls are the first in the world to be fair trade certified and the farm has helped reseed the once abundant bay with wild oysters. 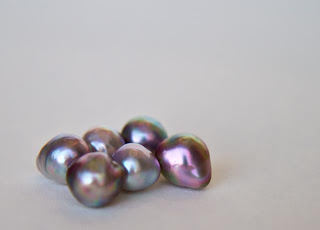 The truth in this fairytale is the pearls themselves: During harvest in July and August the farmers open the oysters which have been growing for four years. Just a fraction contain pearls. Of that number only a fraction are gem quality (the rest are returned to the sea). And of those gems, once in a while one comes along that makes Mclaurin (who by now has seen more pearls than he can count) forget every other pearl he’s ever seen.

**I don’t normally make a pitch for a place this way, but this is a truly unique farm run by some very special people. If you have an attachment to the Sea and want to support what these guys are doing now is the time to buy a keepsake. Between the drug war cutting off tourists and the economic downturn, they are hurting. http://www.perlasshop.com/

I vaguely remember reading the story about the pearls you had obtained, and would love to refresh my memory - please fix the link. This is a thrilling follow up. So thrilling I might even buy some Sea of Cortez pearls, before they run out...
Anon

Thanks anon, the link should be repaired now. If you make it over to Guaymas/San Carlos make a point to visit the pearl farm. The passion the guys have for the pearls, the environment and the Sea of Cortez is infectious.
-d

Ah, yes. The dusty Mexican shop with the forgotten rare pearls, made by prisoners, which turn out to be the made by enslaved children in China. Ceilydh is hot on the trail of the elusive American expat responsible for this crime, on the run down the Mexican coast... Can't wait for the next installment, or even the book!
Cheers, Anon

Almost forgot, sorry: A smart little girl finds the clues and solves the crime(s), in spite of all the disbelieving adults.

That is a very cool story. by the way, I'm glad you're so curious and follow up - it's great for the laziness in folks like me :) Have a good trip up north... will see you guys...eventually.

Most pearls you find in Mexico -sold by street vendors or even retail stores- are Chinese Freshwater Pearls and have a shady story behind them (most are smuggled into the Country, are of the lowest quality possible and misrepresented -which I believe most people call "fraud"- for what they are not). That is fact, even if there are people like "Anonymous" that will rather shut their eyes, ears and minds to the facts. Just the kind of people that will feel good about wearing "blood diamonds" and dismiss everything as a "conspiracy theory" and the making of a new best-seller.
Cheers to you Dude or Dudette...

I'd like to find out more? I'd love to find oout more details.