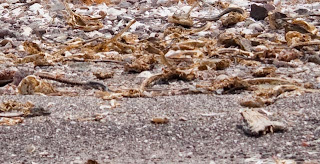 Dead Beach
Mostly our trip has been about life. It's been a celebration of all that is magnificent and bountiful in our world. It's been our chance to immerse Maia in forests, deserts, oceans and wetlands so she can revel in them, but also so she can understand why we use resources carefully, take only what we need, and minimize our impact on the land and ocean around us.
We talk about the environment a lot on our boat. It's impossible not to, when you live in it, and see how connected you are. What we don't do though is focus on the doom and gloom. "If we want children to flourish, to really feel empowered, let us allow them to love the earth before we ask them to save it." David Sobel's words in Beyond Ecophobia: Reclaiming the Heart in Nature Education have been my guide since Maia was tiny. It's not that we're avoiding reality; it's simply that our planet's problems are so huge that her 8-year-old heart shouldn't have to bear them quite yet. 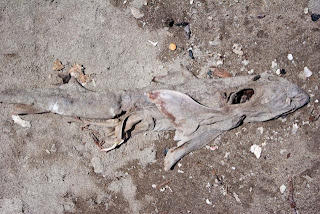 Dead Beach snuck up on me though. Maia named it. She came across it. It's a beach, near a reef, like so many in the Sea of Cortez, where the fishermen are trying to stay one step ahead of the conservation laws. Armed with spear guns, nets, knives and hookah dive rigs the fishermen come, day after day, until nothing is left. They take the baby sharks, the rays, the big fish, the small fish, the clams, and the oysters. From the sharks they take the fins. From the fish they take rough filets. From the reef they take the life.
The beach we found was one of death. There was stink, a pile of carcasses, and vultures. And at its edge, knee deep in water, confused and broken hearted, stood my daughter.
"Why is there such a place as Dead Beach?" Maia asked me as we hiked this morning.
Some people are greedy?
They don't think?
They are desperate to feed their families before it is all gone?
Ignorance?
I cycled through the possible answers before choosing; "I don't know, but it makes me sad," I said. Then Maia told me about her grief for the baby sharks; "Why do they waste a whole shark just for a fin? Don't they know the ocean needs sharks?" Her anger; "I'm so mad they are killing everything and not giving them a chance to grow." Her despair; "Don't they understand there will be nothing left? Nothing…"
Our children see what we are doing to the planet. In some deep part of themselves they know Dead Beach isn't just one place. And they want answers from us; an explanation. I didn't have one for Maia. So I led her on a hike away from Dead Beach to look over a small cove that was alive and thriving. We sat and watched the fish swim and the waves wash over the rocks. 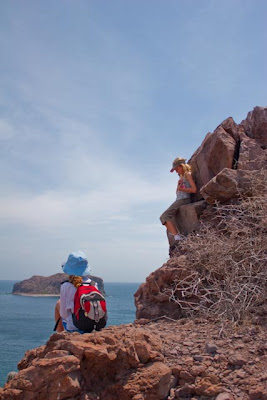 And I hoped her heart healed a little.
----------
radio email processed by SailMail
for information see: http://www.sailmail.com

Diane, you hit the mark with the comment that they know what we are doing and they want answers that those of us who live lightly don't have to give them. The best response I have figured after many years is that some of us are not of that nature and it is up to us "non-humans" to keep the equilibrium. How? I hear them scream, these young ones in such pain to see the destruction and pillage. Stay the course, live as tho it matters because we know it does, surround yourselves with beauty and be thankful. Deep inside I know that is not enough and so I send energy to those smarter than I who have resources (money and education) needed to effect major change.

Hug Maia and blow a kiss to a starfish for me when you see one. Your blog sustains me some days, thank you.

Thanks Lynda, I like how you phrase things. All I can do, really, is hope we learn...