Posadas, pinatas and us

When I told Evan and Maia there was a fiesta on shore last night—they didn't seem nearly as excited as I would have expected. In truth, we've seen (and heard) a lot of very enthusiastic (but maybe not so talented) performers in the past year. And we're pretty much Folkloric Ballet-ed out...
But, I told them, this one was different: It was the Posada—which actually means quite a few things in Mexico.
The Posada in its purest sense is the re-enactment of Joseph and Mary's search for room at an inn. For the nine days before Christmas, friends and neighbours set out and go door to door with candles, only to get turned away at each stop, until they reach the home where that night's party is being held. Once they get to that place (usually the third stop) everyone is invited in and the kids get to whack a pinata.

Posada is also the generic name for any kind of Christmas party--from the one at the office, to a lunch with friends. And it is also the name for bigger celebrations: like the one we attended, where hundreds of locals come out to see a procession of Joseph and Mary, then sing carols, eat food and dance...
So, I explained, this wasn't just going to be the standard fiesta we've become used to and maybe even a bit jaded about. This was going to be good. 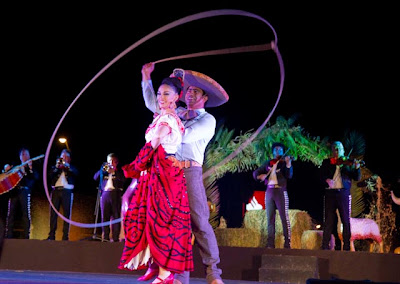 The other element that had me excited was that the performing troop was from Ballet Folklórico de México the group where baile folkloric, itself, originated. In the 1950's a researcher, Alura Angeles de Flores and choreographer, Amalia Hernández Navarro collected information on all the regional and indigenous dances (many which were dying out) and together they created a new form of dance which combined the style and costume of the regional dances, with the discipline and techniques of ballet. 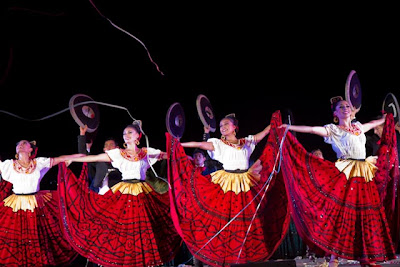 The dance troops go through up to a dozen costume changes and often perform with a live mariachi band—which plays without music behind the dancers. When done well, folkloric is breathtaking. And as last night's performance began—with an achingly beautiful song and a lush posada procession, we knew we were seeing the good kind. 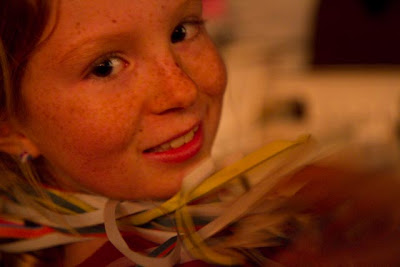 By the end of the night we were all giddy—and grateful and one fiesta closer to Christmas.

What a wonderful picture of Maia. I suspect you'll treasure that one for a while.

Thanks, Deb. It does capture how happy and excited she was in that moment:)