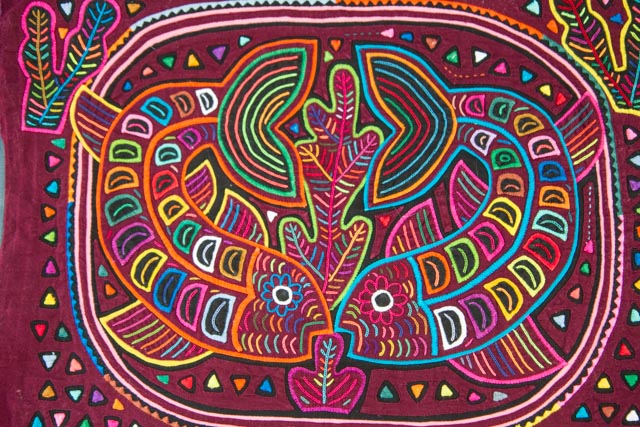 In our years of travel we’ve never been big souvenir collectors. Mostly we’ve limited ourselves to consumables (food makes a great souvenir), a mask collection, some textiles and a few sparkly things (these have been more for Maia & I than Evan.)

Living in a small space on a small budget is part of the reason for our lack of consumerism. The other element is that unless we buy directly from the artist it’s hard to know if our purchase is actually beneficial to a community. Often we see the same mass-produced items (though with a different city or country stamped on it) in every gift shop and market we visit. Nestled between the ubiquitous trinkets are often ‘handcrafted’ products of questionable origin.

In Cartagena we encountered a particularly cheeky version of the ‘handmade’ scam. While we were enjoying an evening mojito in the old town, an artist called Roberto stopped by our table to show us his sketchbook. As he talked about his work I noticed the man at the table beside us seemed particularly interested. Our fellow tourist encouraged Roberto to show him everything in the book—and when Roberto came to a particular picture the tourist started to laugh and unrolled an identical ‘original’ which had been drawn and signed by a different ‘Roberto’.

Unoriginal originals aside, we’ve seen enough mass produced knickknacks catching dust in shops around the world that we’re not in a rush to have them catch dust on our boat. So with that in mind we set out with the goal that any memento we acquired should fit into our mask collection (no more than one per country) and be ethically produced, or it should be somewhat useful and when possible purchased either from the artist or from an artist’s co-op.

Luckily one of my favourite souvenirs from our first trip meets our criteria. Originally Guna women used plant-based dyes to draw complex designs on their torsos. At some point after contact, the designs were transferred to fabric. The oldest molas (mola literally translates to clothes of the people) found in museums are from around 1900. But women were likely wearing the gorgeous blouses for the hundred years prior.

Nineteen years ago I fell in love with the handcrafted Guna Yala molas. We were lucky then to spend time with master mola maker Lisa who explained how molas are made (mola makers are often described as women, but a few of the most skilled makers are men or transgender people, like Lisa). Lisa showed us the difference between traditional designs; intricate geometric patterns which often contain stylized symbols that either have a specific meaning, or represent something from the maker’s life, and tourist molas; colourful tropical images that are appliquéd onto a fabric background. 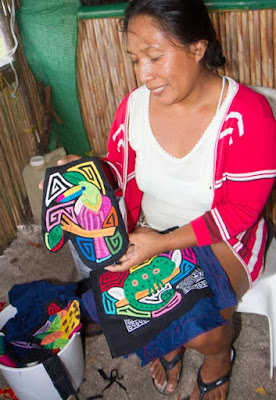 Because of the region’s then isolation (before mobile phones and regular cruise ship visits) there were also a fair number of unexpected molas (which in retrospect I wish I had bought an example of). Back then mola makers would often get images ideas from second-hand magazines, so some of quirkiest molas we came across contained random images of Smurfs, obscure actors, fire trucks and cityscapes.

Choosing a mola is really about taste—if you like one, buy it. There are specific things to look for though. This visit we got to spend time learning from another master mola maker named Venancio Restrepo. He explained many of his designs come from a book that was assembled by his grandmother.
Traditional molas often have a black, red or orange backgrounds and the best are three or more layers thick. They use reverse appliqué and tiny, near-invisible stitches. The smaller more even the stitching the better the quality. Molas are made in panels of two—for the front and back of the blouse. The panels will be near identical but will have subtle differences. You don’t need to buy both panels—but some people prefer them for matching pillows and the like.
Once you’ve looked for quality you also need to look at complexity. Parallel rows should be narrow and evenly spaced, cut-outs should be the same size and shape, and images should be clearly identifiable. The image should also be balanced within the panel—if the illustration is mirrored it shouldn’t be identical, but it should be similar.

The more complex the work, the more a mola will cost. Some of Venancio’s molas, which are six and seven layers thick, include multiple parallel rows of curved and zigzag design and intricate embroidered stitches took over a month to complete. These can cost well over $100. His work is exceptional—but we did pay a bit of a premium. The molas he charged $50-60 for were not dramatically better than ones that women in the outer islands charged $30-40 for.

This said, an hour with Venancio, or Lisa, can deepen your appreciation for the art form. Venancio carried a half-finished mola with him, which he works on during lulls, and used it to show us how he makes a piece. He was also able to tell us about some of the meaning behind the patterns and symbols.
The outcome may be that we paid a little more for a couple of our molas than we might have—but we have great memories of time we spent with Venancio. Every time I look at any of the panels we bought I’ll recall our time in Guna Yala, our interactions with the locals and the story behind our souvenirs—which is really the whole point.

Great post! Great memory! My very best wishes and warmest regards to you and your family. May you always find fair winds and calm seas.