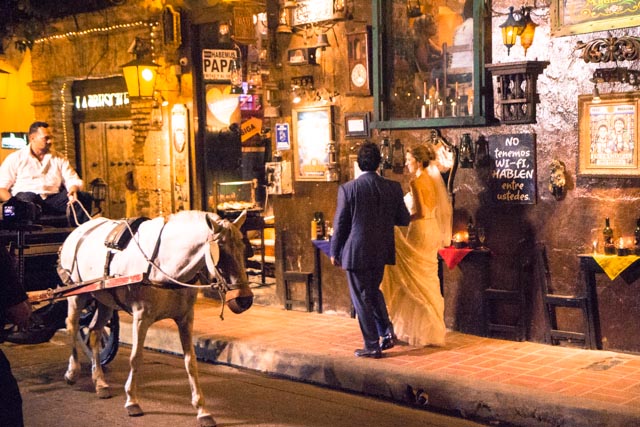 The clip-clop of our horse’s hooves, as they echoed off the cobbles of the unlit street, were almost enough to transport us back one hundred years—to a time when it would be normal to be transported by carriage on a street with no lights. In our case, there was a problem with the electricity, or the government, or both. 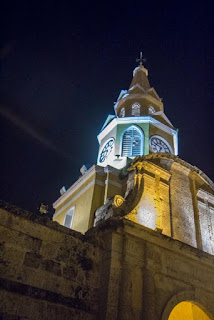 The reason half of the old-town was shrouded in darkness was lost between Spanish and English. But the fact remained, traveling by candlelight smoothes out the seedy bits, which keep the town authentic, and dims the veneer of tourism and gentrification, casting enough of a magical glow to last the evening. 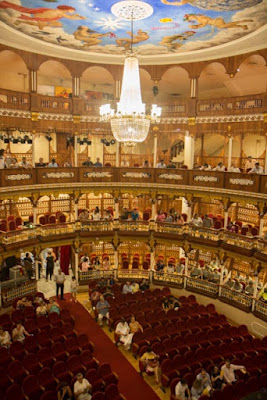 Night in Cartagena is filled with life. Storefronts we never notice during the day offer everything from tourist trinkets and Cuban cigars, to high end fashion and emerald jewellery, to discount groceries and hardware supplies. Our carriage guide pointed out some of the most famous shops, some lit some not, as well as historic buildings and squares. 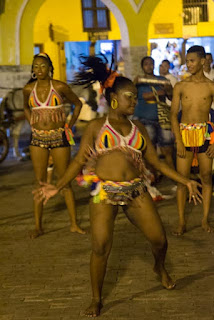 We plodded past the home that once housed Garbriel Garcia Marquez then later walked back to Plaza Fernandez de Madrid—one of the settings from Love in the Time of Cholera—and watched as young couples strolled past, stealing kisses in the shadows of the almond trees. 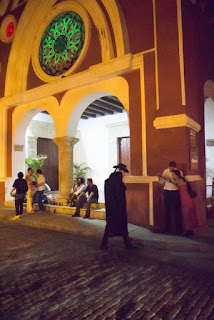 People watching is the prime activity in Cartagena at night. Dancers weave their way into the city’s multicultural story by filling the street with folk dances, musicians play concerts for audiences as small as two and even the food vendors are on display—hawking their wares with the flair of an actor.
For me, it’s the private moments that intrigue. Catching a quiet smile between a new bride and her groom or watching another couple, grey haired with years, dance an elegant salsa are enough blend the lines between reality and imagination. Enough to make this place magic.

The anchorage is busy with ferry traffic but holds several dozen international cruising boats. There are also a good number of boats running charters between here and Panama. We were able to get updated San Blas charts from one boat.
Club Nautico charges 70,000 pesos a week (about $25 US) for safe dinghy moorage, free wifi, showers, garbage drop off and laundry service.
There's a good grocery store a five minute walk away and a large mall (Caribe Centre) with an excellent hardware store a 20-30 minute walk. The Basruto public market is near the mall.
We used the services of agent Manfred Alwardt to check in and out. His email: manfred.al@gmx.net
Taxis are cheap and plentiful and while we used them often we never felt unsafe walking in the neighbourhoods near the marinas.
We did hear that a few dinghies have been stolen from boats--but nothing atypical for the Caribbean.

These posts leave me wishing I was loving Cartagena. Is there a big deal being made about the recent Nobel Prize win? All the best, Michael

First, thanks for allowing anonymous posts, for those of us who are "allegedly" paranoid.
Second, let me share my most memorable Cartagena moments. While taking the horse-drawn tourist carriage through town, the horse died. Sad. They work them past their prime, when they're not useful on the farm anymore. The other fun time was sneaking into the closed hotel pool, and later finding out why it was closed. Someone was electrocuted in it. Fun times, for sure, but to be fair, that was in the late 80's of the last century. Pablo Escobar was still alive, and his compound gate was still adorned by his first cocaine smuggling airplane. The steeple of his personal church just visible beyond.
Lastly, fair winds, and following seas. Hope to see you in Oceanside, California.