We entered Bahia de Cartagena through Boca Grande. During the exploring and conquering of the Americas, the Spanish impeded enemy access to the harbour by laying down coral blocks just under the surface of the wide entrance. If you didn’t know exactly where to go in, you’d rip the bottom off your boat.

Happily, Cartagena now welcomes English speakers. We entered the bay with hulls intact and camera in hand—ready to shoot photos of the famous statue of the Virgin and Child which graces the inner bay. Oddly—the statue was missing. I wondered if the 60’ tall monument was off for cleaning or repair, but we soon learned the Virgin had been struck by lightning and had blown up.

Our years in Latin American countries make this colourful and chaotic city feel familiar. It’s a place where shanties abut glossy high rises, yet everyone buys their breakfast arepa from the same street vendor and needs to navigate the same sea-flooded street.

Why I love this place is hard to define. It’s full of unexpected moments: We wandered through the unmarked tunnels of Castillo San Felipe and followed one steep corridor as it narrowed and shrank, growing humid and close as it snaked downward. We considered turning back, but assumed the tunnel must go somewhere—otherwise why would it be open to the public? Eventually it leveled out—arriving at a t-junction which was partially flooded and home to an aggressive looking iguana. 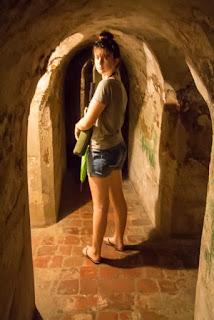 There are daily rhythms in Latin America which never fail to make me smile: bedlam on the streets, a languid siesta, and a night that pulsates. Music everywhere, always…

Mostly it’s the sheer exuberance that makes me happy. The new paint on old buildings is brighter, the flowers and fruit are bigger and the hawkers are louder than in other places. Our cab was in a slow-motion car accident complete with blaring horns and wildly gesticulating hands. Both drivers got out and argued about the resulting dent in rapid-fire Spanish. Passersby and witnesses joined in. With traffic backing up, the other driver offered ours a fistful of cash—about $10 US. With a satisfied grin, our driver drove on to our destination. 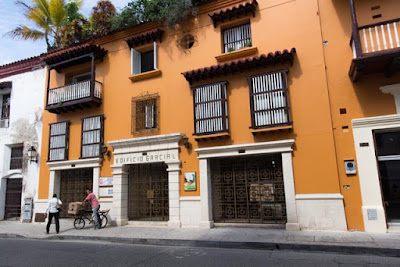 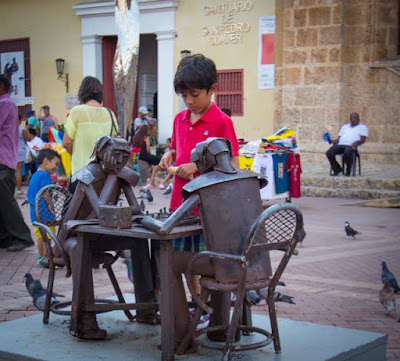 Our plan had been to only stop for a few days but with so much to see, do (and eat) we may stretch our visit to 10 or 12 days.

Wow y'all guys are amazing!! I feel excited by everything I read, coming from another sailor it looks like a dream come true! Awesome experiences!

Wow y'all guys are amazing!! I feel excited by everything I read, coming from another sailor it looks like a dream come true! Awesome experiences!

Glad to hear another cruising family endorsing our plan to head to Cartagena! Every now and then, we have nagging "security" concerns...and then we hear from other families about how amazing this place is. Can't wait to see for ourselves.

Hi Deb,
We love it here and really recommend it. There are heaps of families--both land tourists and a few international cruising boats--around the town. The only part we haven't loved is the number of powerboats that speed through the anchorage--but you can't have everything.