Waiting for Hurricane Matthew in Curacao


While I’m not *that* prone to magical thinking, I did make that comment about Spanish Waters in Curacao being a good place to hide from a hurricane and whammo, up popped Matthew. I don’t normally hold myself responsible for cyclonic activity, but considering my history with conjuring up tsunamis (three in this voyage) and causing southern Florida to spontaneously burst into flames (I said it deserved to burn after a miserable run in with a powerboat’s wake, and poof!) the odds are looking bad for me.

Then there’s the simple fact that historically Curacao doesn’t get hurricanes—but then we arrived and suddenly one headed straight this way. 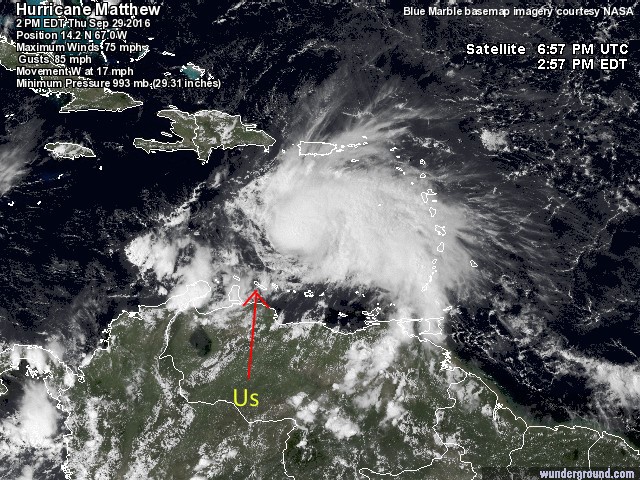 Much of our week has been spent tracking and discussing Matthew’s, umm, track. As of this morning, it looks like we’re off the hook. Matthew has ended up going well north of its initial path so rather than getting tropical storm conditions all we really expect is a good deck wash.

We did opt to move the boat into a narrow channel that offers better protection from the south and west. The official anchorages offer great protection in the easterly trades but with a storm on the horizon, the port officials opened up the entire bay to anchoring.

While we were waiting for the storm to decide what it was going to do, we decided to dig into a few projects. Our auxiliary Tohatsu 6 Sailpro outboard has always been cranky—not running more than it runs. Evan broke down and got it a new carburetor—which we assumed would do the trick, but nada—so it’s off to the mechanic tomorrow.

We also have the material for new dinghy chaps. When we were in South Africa we had our old dinghy retubed for about $600. But the tubes are PVC, and they won’t last well in the tropics. With a flat-calm anchorage at our disposal we’re going to get sewing. We’ll also keep painting and varnishing.

There’s also been time for fun, now that Maia is mostly recovered from Zika. Yesterday we toured the city—visiting the forts; the Curacao liqueur distillery at Landhuis Chobolobo (nothing like bright blue liqueur for breakfast); and the impressive and sobering Kura Hulanda Museum. The museum was high on my list of places to visit. Two of my recent stories have required a lot of research into the African Slave trade—and the Kura Hulanda museum, which traces the history of many of Curacao’s residents, has a sensitive and emotionally powerful display of artefacts from enslaved Africans.

After exploring for a few hours we finally managed to get to Marshe Blue for a local lunch (I drew the line at stewed goat head and curried sea snake). Evan had goat (the body bits, not the head)—while Maia and I stuck with the more familiar (and delicious) red snapper. 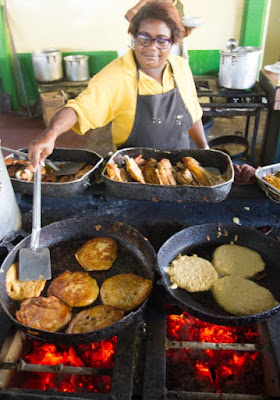 Each time we set off exploring we grow to like this place a little more. Our initial impression was Punda was just a big outdoor shopping mall with a gorgeous facade. But as we’ve spent time wandering the narrow streets and popping into the historic buildings I find myself intrigued by the people who decided to settle here. The buildings are all made from coral stone—which because of their high salt content buildings require constant replastering and repainting. But somehow—despite the challenge of maintaining them (and finding a way to make a life in this desert environment) this is an intriguing and thriving island.


This week we’ve also had a chance to get to know the Galactic family. If you don’t follow their blog—give it a read. These folks are hardcore; crossing oceans with toddlers, sending them to school in the Australs and then sailing to South Georgia... Alisa made the off hand comment that even after crossing the South Atlantic she wasn't in a mad rush to hit the grocery store because she's used to provisioning for seven months at a time and it had only been two! Compared to them, we’ve yet to take a risk. Makes me think we ought to go around one more time, just to make it trickier.

But while they may be going for twice in a lifetime—for now, we’ll call once enough. We’ve left some beautiful things in our wake and this week we learned about one of the most wonderful: our dear friend Lewa in Fiji had her second son and honored us by naming him after us. We hope the name brings wee Keffy Ceilidh joy.