Out with the Old, In with the New

No, this isn't about replacing my spouse or child or cat.

- relatively cheap to buy and replace when required
- have a decent lifespan (this is set #3, each set lasting about 3.5-4 years of heavy daily cycling)
- each one can be lifted without back strain (~64 lbs each)
- can be found in a lot of parts of the world, unlike AGM, Gel, or Li-Ion.

We thought the batteries were maybe starting to get tired in South Africa. But that was January, and we were spending money there like semi-sober sailors on boat gear. And in a Monty Python way, they weren't quite dead yet. So we decided to see if we could keep them going for a few months more. Which turned into 8 more months.

In St. Helena, where we spent 40 days in the lee of a big cliff, the sun didn't shine directly on the boat until late morning, so we had to run the engine an hour every other day. This was unheard of on our boat, which normally relies only on solar power. There, we also found one solar panel had died. So it now became time to replace the batteries. St. Helena and Ascension offer very limited shopping, though we probably could have found something in Suriname. But we were close to the boat gear shopping paradise that is the Caribbean (seriously, we haven't seen such well stocked chandleries since the west coast of the US in 2009)


(Easy way to test your solar panels:  one person throws a towel over each panel in turn, and one person inside reads the amps coming in. A dead panel doesn't change the power coming in)


Budget Marine in Grenada offered reasonable pricing on batteries ($177 each) and a replacement 105W solar panel (~$200). This is about what I paid in Australia for the last set of batteries, and a bit more than 8 years ago for the first set.

New Solar Panel beside old one. The one on the right is the new 105 Watt one, the one on the left that is the same overall size is a 75 Watt one, donated by our friends Cindy and Doug, when they were upgrading their solar panels. It was about 10 years in service with us, and who knows how many on their boat with the previous owner. Look how the cells are cut from a much bigger silicon wafer and so are much efficient in terms of space compared to the older one. 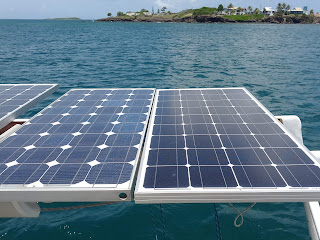 Our solar panel farm keeps growing. The biggest panel in the middle is 200W, and we have a total of 550 W. Today, in bright sun, our peak power was running at about 33 Amps. That's like having an alternator running all the time. We love having a lot of solar panels. 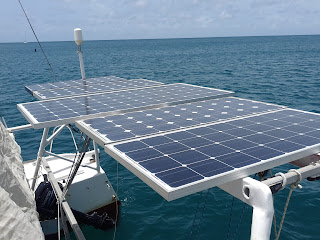