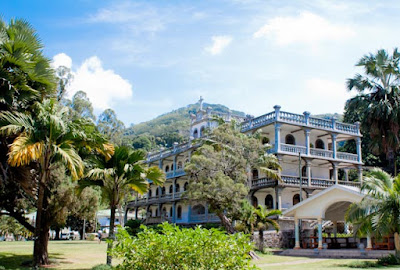 For those who have prepped their boats for high theft areas—any tips for us?

So glad you and your family are OK and that the police and locals have been so helpful.

We mounted a battery powered (AA batteries), LED motion detector light in the cockpit. We do not believe we were ever boarded at night. The motion sensitive light was nice when we returned to the boat after dark.

It's freaky to think of someone making it into your berth and rummaging through stuff at night... we've opted for the same precautions you've mentioned (lift and lock the dinghy, close door and hatches) and we've added some lo-tech precautions like locking a chain to the dinghy and around a stainless rail - not for the locked aspect but because it would be noisy as hell to remove. I've also toyed with just putting a line of mono-filament across the top of the steps at night a few inches off the deck. Not easily visible in the dark but would hopefully trip the intruder and therefore make a racket on the deck. Haven't added motion sensors or alarms yet, but if we have problems they may be on the list. Will be interested to read what you end up adding.

Usually the best defence is attack, and the most passive form is noise created by you (they don’t want everyone to know they are there), (or them in pain). Tacks or nails at a easy boarding point may help convince them to leave, a trip line (mono filament fishing line) is difficult to spot even in daylight, and can be rigged to activate a horn and lights, notifying the whole area to a problem.
If you really feel motivated, you can convince a swimmer to leave your boat by running a thin bare wire (stainless or copper) where they will conveniently touch it while boarding. Leave your low power inverter powered up (it will consume some standby power) and connected to the wires, one wire in the sea, one on the wire around the boat ready for them to touch. Not likely to do them much harm, guaranteed to wake them up, but will certainly make them reconsider your boat. Unfortunately if they board from a boat it will not be very effective unless you up the voltage, which can be done as well.

Thanks for all the thoughts. There was another more violent boat boarding a few nights after ours. The good news is of the four boats that were robbed the thieves ended up with very little of value--so hopefully the effort isn't worth it. We've been looking for motion sensors but had no luck. I think locking up (thank goodness it's cool here at night) and trying to make it noisy to take stuff is a good idea. I like the chain on the dinghy--we have a quiet cable... I laughed at the idea of electrifying the boat--no doubt we'd end up zapping Charlie the cat...

Hi guys
Glad to hear you are all o.k.Here in Mauritius lots of people are paranoid with security and always lift their dinghy at night...we are reluctant/lazy to do so until I suppose something happens...and then it will be too late.
We are looking forward to catching up with you in Madagascar.
Hopefully it wasn't too difficult for you to refill your gas bottles?
Tomorrow we are off to Reunion
Keep safe
Evita crew

I might be totally off base here. I know that as a boater you do not want "windchimes", but have you thought of constructing a much more spaced out windchime (with empty cans) across your entry hatch? One that would clatter as someone is coming down the ladder and make enough noise to wake you up? You could make it so that it's placed at night and can be taken down in the morning, and construct it so that gentle wake doesn't affect it. Thieves would still be able to access your boat, but not the cabin.

I recon the next Home Alone instalment needs to be based on a boat with all these ideas!!

But crime is a serious issue. Though one needs to weigh up the risk of attack vs impeding yourself if you need to get up in the middle of the night for a dragging anchor etc.

Making yourself unattractive as a target is the best approach. Dinghy and motor raised (i liked the metal chain idea). Also a cockpit light to make a sneak attack more difficult but more functional as stopping drunken cruisers returning to their boat bumping into yours (no coloured lights or strobes please).