Visiting the Relatives--Orangutans in Borneo 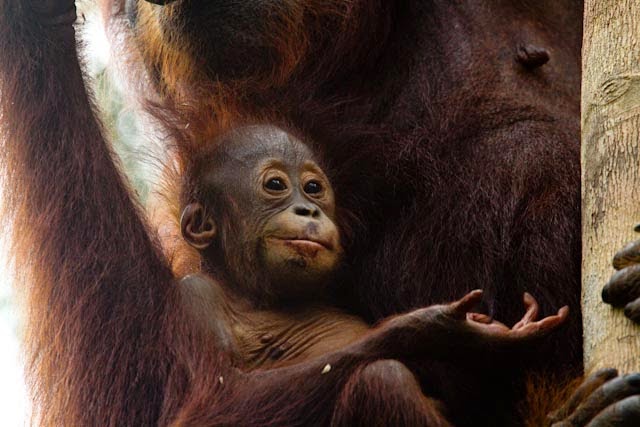 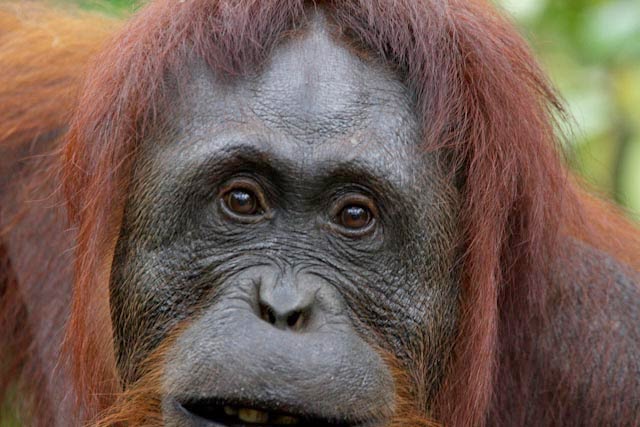 Our bright green and yellow Klotok slowly chugged up the river, easing past floating islands of water hyacinths and skirting the edge of the dense swampy jungle. This river trip, to see the orangutans of Borneo, is one we’ve dreamed about for years. And with our private boat, friendly crew and delicious meals—the trip was even better than hoped. 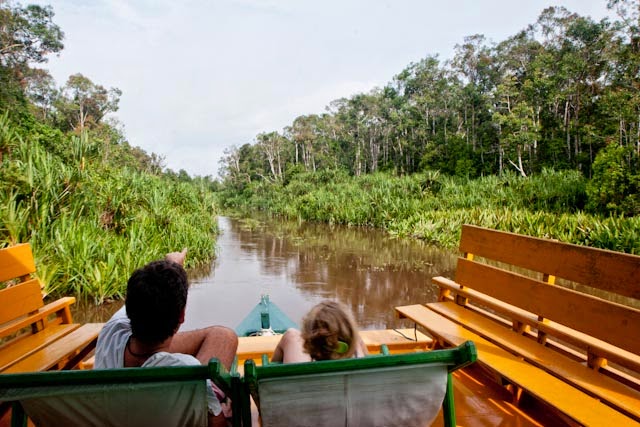 Even still, station one, our first stop, was a bit of a surprise. All the photos I’ve seen of the orangs give an up-close and personal feel that somehow seems unstaged. What we found was a feeding platform set in the jungle and roped off from a set of benches. The orangutans were called (yodelled for?) by the guides after food was set out—giving the whole thing an animal-show-at-the-zoo vibe. But when the apes began swinging in from the jungle, crossing over our heads and cautiously sussing out the setting before grabbing a handful of bananas, it was clear that while these former orphans and illegal pets were habituated to humans—they’re still wild animals. 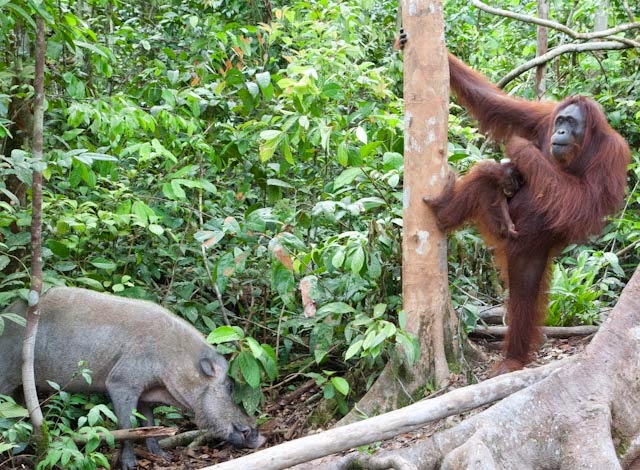 Tanjung Puting National Park was first set aside by the Dutch Colonial government in the 1930’s—to protect the resident orangutans and proboscis monkeys. In 1971 Camp Leakey was established by Birute Galdikas as a base for studying the wild Orangutans. But fairly quickly Indonesian officials began bringing her orphaned and seized orangutans and her work turned to controversial efforts to oversee their rehabilitation.

Tanjung Harapan, or station one, was originally a village. But when it was absorbed into the park boundaries and chosen as a quarantine and release site, the village was moved across the river. Until about 1995 some 250 wild born orphan and ex-captive orangutans were released here and in Pondok Tanggui, or station two. The great apes that were swinging over our heads (and in our friend Sarah’s case, peeing on her) were all the decedents of these original rescues.

Knowing their history made seeing the animals living in the semi wild seem extra sweet. Watching the young ones come out of the canopy and scurry to the platform for milk and bananas felt beautifully familiar--like watching kindergarten kids grabbing a snack. Despite knowing that orangutans are one of our closest relatives (they share 97% of our DNA) it took watching a mama help her baby down form a tree and another teaching her baby to climb to feel the deep connection—right down to my DNA. 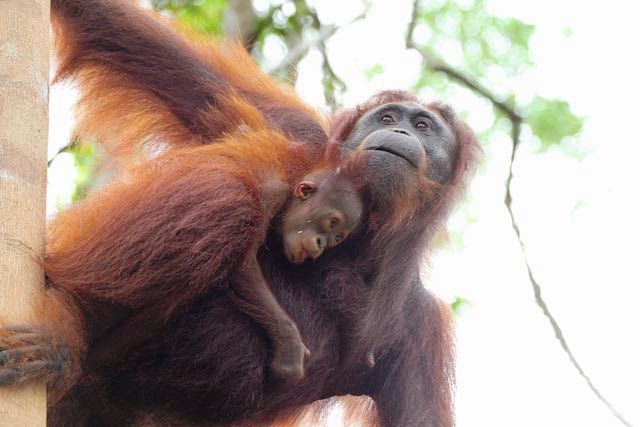 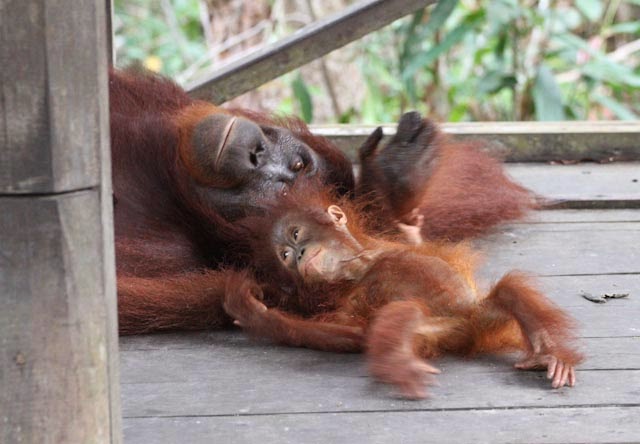 We spent hours watching them. At Camp Leakey we didn’t leave the feeding station until dusk drove us away. And we felt so rewarded—seeing so many intimate moments between mother and child, and then having a breathtaking encounter with Tom, the alpha male as he swept past us, close enough to touch. 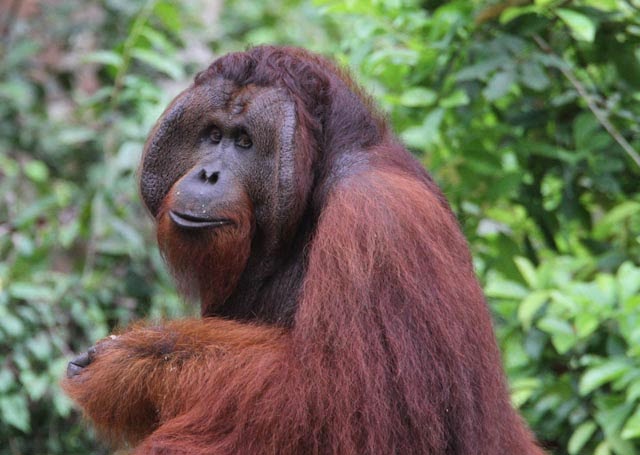 Our trip back down the river came with even more wonderful moments: the sightings of six different wild and semi wild orangutans in the trees on the river banks. 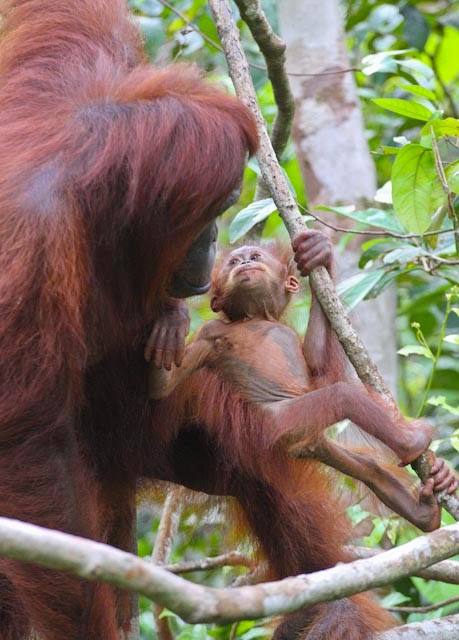 Ex-captive and orphaned Orangutans are no longer released in Tanjung Putting because of the health risk to the wild and established populations. As we traveled down the river we sighted a mother and baby on the non-park side of the river, on public land which is being ferociously logged by illegal cartels planting oil palms. When I asked our guide, Rini what will become of them she was sadly straightforward with the harsh facts—unless the logging is stopped, they’ll die. The best case is a logger might rescue the baby, which would then go into a quarantine site and eventually rereleased in a safe place. 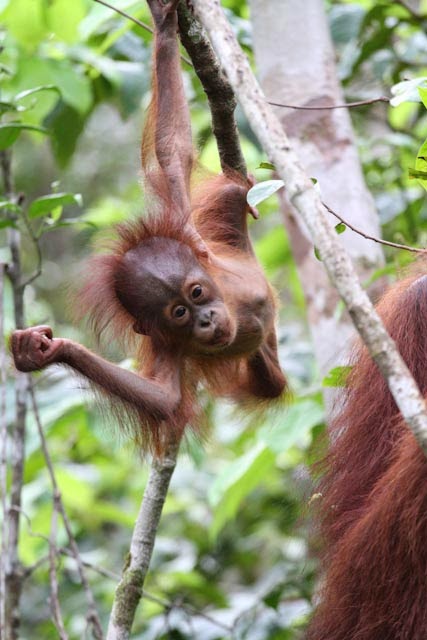 The problem is the lack of safe habitat. New release sites take community involvement. The village that was moved across the river from Tanjung Harapan, or station one, is developing a new release site on re-forested public lands. Other release sites border the park, but they are at constant risk of being logged.
The hope comes with Indonesia’s new president Joko Widodo, who has pledged to halt the illegal clearing for palm oil. It also comes with each of us refusing to buy products that contain palm oil—which is found (and often hidden in) more than 50 percent of the goods we use every day, from shampoo to cookies…

The details: Our trip was arranged by Adi. He meets many of the boats that come into the river and his price was significantly lower than the internet quotes we got (and our food seemed better than many of the other boats!)
His number in Indonesia is 0822-5553-1505. The price for the four of us with all meals, guide, boat crew and even a guard for our boat was 7,800,000 rupiah ($618 US) plus tips.

Wow, what a lovely post. They are looking into our souls. Thanks!

Love this, and still watching out for Palm Oil!

Thanks--we were so lucky to visit! It really is the trip of a lifetime and one that makes you think about your choices. It would be an unfathomable loss to lose them in the wild.