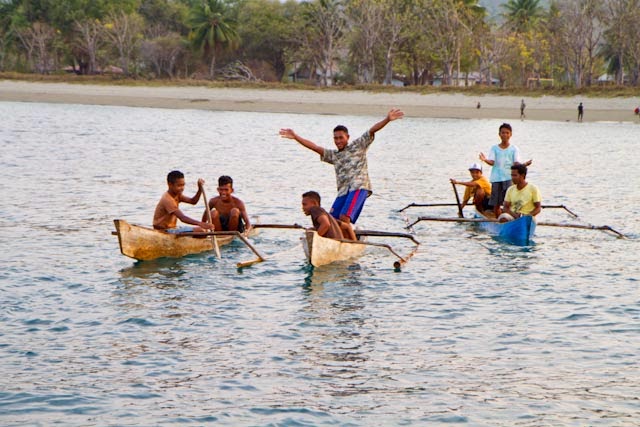 We’re anchored in the pretty islands off the south western peninsula of Lombok. Sailing canoes regularly glide past, dodging the pearl farms and fishing platforms, and last night we heard at least four competing muezzins calling people to prayer.

It’s very different here than the regions of Indonesia we’ve been traveling through-and not just because it’s green. There’s much more industry; with dozens of pearl farms on the water and illegal gold mining in the hills. There’s also more tourism; each island seems to have some sort of small resort or guest house.

The other big difference is we don’t seem to be a novelty anymore. We’ve seen a half-dozen cruising boats in the distance and since arriving on Lombok the only visitors we’ve had were six customs and immigration agents (somehow Kupang failed to formerly register us) and a dugong. 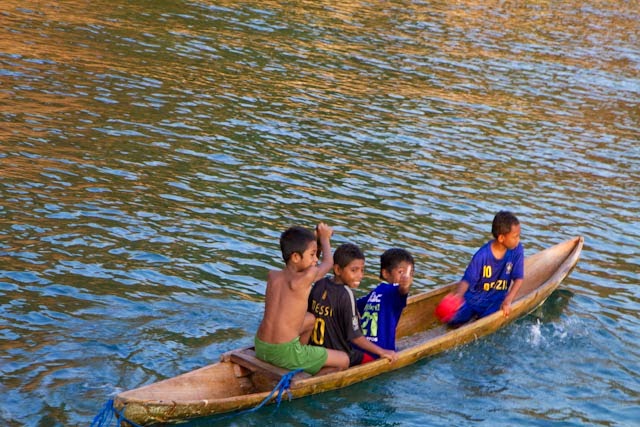 Visitors are both the pleasure and pain of Indonesia. When kids come after school, they’re the best and funniest entertainment ever, though when one boat comes, you need to be prepared for several more. We’ve also been woken at the crack of dawn one too many mornings with the call of ‘selamat pagi’ from the water. While the early hour can be trying, we tend to rally and rise because the visitors are often charming.
One common reason people seem to paddle out to the boat is to get a chance to practice English. In the shipbuilding village of Wera the local English teacher came out to see us twice. He was interested in chatting about politics and learning how other democracies work (Indonesia considered a new democracy and had a dictator until 16 years ago). He was also interested in knowing what we thought about Indonesia—how it might evolve and what steps it should take. When he left we gave him my spare (and very heavy) English Dictionary—a gift that brought him to tears.

On the pretty island of Medang a young coconut farmer called Bian was a regular visitor. He showed up early the first morning with a gift of coconuts and eggs with the hope he could speak English with us. Bian’s English was limited but (but not as limited as out Indonesian) so we spent a fun hour teaching each other the words for waves, wind, thunder storms and more. 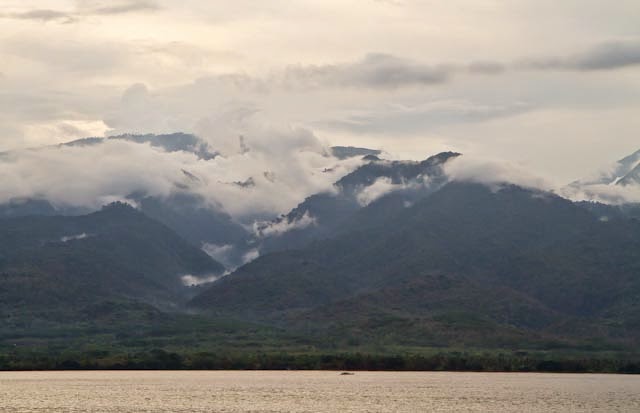 While he visited I wished for the umpteenth time that we had bought spare copies of our Lonely Planet Indonesian phrase book. Every Indonesian who has used it has been reluctant to let it go. If I had it to do again I’d be sure to buy a bulk pack of them or search online for a good phrase book—then make lots of copies.

It’s quieter without the calls of children and a little lonelier too—but I guess like the green hills and rain clouds it’s just a sign that we’ve moved on to another new adventure.

Love following your adventures. So happy you guys are on the move again!