The Great Pumpkin in Oz 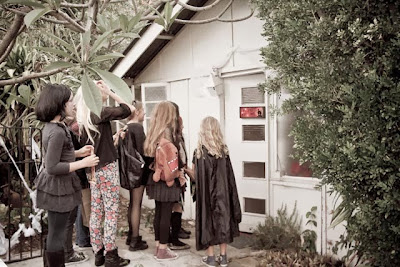 If you asked Maia, she’d tell you Halloween is the hardest holiday to be away from home for. It’s the one night of the year (plus the week or two leading up to it) where you can delve into your imagination and become anything you like. Then, with your alternate persona firmly in place, you head out into the spooky streets en mass and find what’s out there beyond your normal boundaries. The discoveries are quite splendid: I recall learning things like where that cute boy at school lived, that a favourite teacher had just moved down the road (and she had a husband!), and that the forbidding lady on the corner was actually really nice.

Here, Halloween isn’t quite like that. The celebration is occurring, but on a smaller level, despite Aussies holding a few misconceptions about the day. The belief that it’s an American day of excess and commercialization, which is rooted in evil and gore, is hard to shake. And it’s kind of hard to sell an evening where kids dress in black and go begging lollies off strangers.
It’s not surprising, I guess. If my only exposure to Halloween was through movies and TV I’d know nothing of the feeling of the holiday. It’s kind of hard to describe to people what’s it’s like to take to the streets of your neighbourhood in disguise; the excitement of passing each other in the dark, trying to sort out who you’re seeing while being disoriented by fireworks and scary displays; the fun of being warmly welcomed by neighbours you normally only see at a distance and getting to peak in through their front doors…

So for my Aussie friends who asked: Halloween’s roots are found in the Gaelic harvest festival of Samhaim and the Christian festival of All Hallow’s Eve. The traditions, like everything in North America, are a mash-up of cultures and ideas (Maia used to get treats that ran the gamut from Japanese rice sweets, to Turkish delights to Latin American sugared skulls). Trick-or-treating is reminiscent of souling (where kids went door to door for soul cakes) and the symbols (carved pumpkins, apples, spooky skeletons) reflect the season’s transition to the darker months of the year. After that, it’s refining the details. Costumes can be spooky or aspirational (Halloween isn’t a theme…) and the more creative the better. Socializing is important but spending a fortune is not.

Our Halloweens in Oz have been spoockacularly charming small-scale versions of the holiday at home. The stores aren’t filled with elaborate costumes (they’re overflowing with Christmas stuff instead…) so most kids wear simple DIY efforts. Pumpkins are imported and very expensive, so decorations are DIY as well. Urban myths of poisoned Halloween treats (which never actually happened) have never reached Oz, so kids happily accept unwrapped lollies, or eat a chunk of chocolate offered at the door (less plastic waste). And because only a handful of people participate—the kids do a lot of walking to earn their treats. 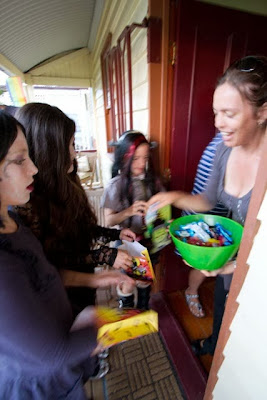 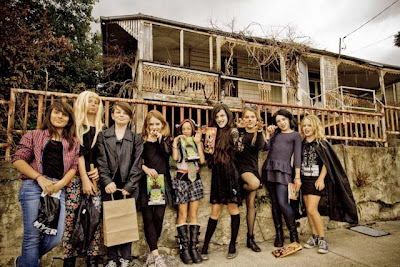 But the feeling? It turns out that’s the same. The kids dress too soon and then jitter with anticipation while they wait for it to get dark so they can head out. And once they’re out it’s just pure fun.